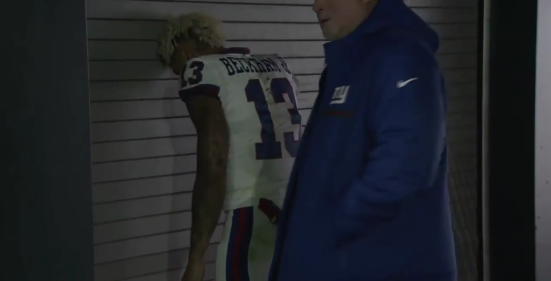 Odell Beckham, Jr. grabbed 11 catches for 150 yards on Thursday night against the Eagles … but it wasn’t enough to clinch a playoff berth for the New York Football Giants.

The Eagles defeated the Giants, 24-19, and that left Beckham really, really pissed off. So much so that after the game, he promptly left the field and refused to shake hands.

He had a meltdown outside of the locker room, growling at himself in frustration.

A distraught @OBJ_3 after the Giants loss in Philly pic.twitter.com/r0P8CMGky5

Pretty sure that’s exactly how LeSean McCoy acted last season after Chip Kelly’s Eagles defeated the Bills at The Linc. Interesting how either the Eagles got into his head, or how he got into his own head. When he spoke to the media, he said he was just frustrated that he didn’t make a play on the final drive that ultimately cost the Giants a chance at clinching a playoff berth.

Wouldn’t it be funny … if … the Giants … didn’t make the playoffs?