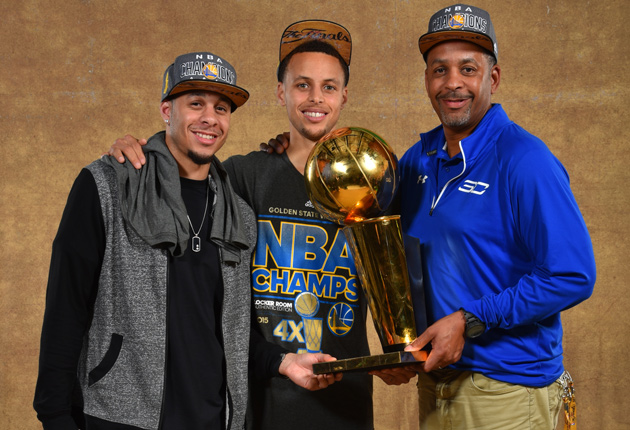 In recent reports, it has been documented that Steph Curry’s agent and father, Dell, told the Minnesota Timberwolves not to draft Curry in the 2009 NBA Draft. This story becomes more relevant in the 2017 NBA landscape given the constant headlines involving one LaVar Ball and the infinite wisdom he bestows on the NBA followers. The elder Ball’s decisions may not be the most popular right now, but his theories will continue to play themselves out. He is just the latest in a long line of parent agents who have tried to influence where their child is drafted.

As we look back over the years at the examples set by Eli Manning and Kobe Bryant, we often think to ourselves how these situations play out. Lucky for us, former Minnesota general manager David Kahn recently wrote a story for Sports Illustrated talking about one of the most infamous moments in the Timberwolves’ draft history when they drafted two point guards at No. 5 and 6 in 2009, but neither of them were named Steph Curry.

So, why did Minnesota leave Curry on the board? Here’s his explanation:

In 2009, just days after my May 22 hiring as President of Basketball Operations for the Minnesota Timberwolves, the agent for Steph Curry told me that Steph’s father, Dell, did not want his son to be drafted by Minnesota—“No offense,” as I recall Jeff Austin, his agent saying to me at the Chicago draft combine.

Jeff Austin, who I’d known casually, had represented Dell Curry when he was a player. He had been handed Steph due to his connection to Dell and told me this was a family request. “I really need your help on this,” Jeff said, explaining why there would be no visit and perhaps even hell-to-pay. (As it turned out, this was the only time when I was with the Wolves that I ever ran into this type of draft problem.)

So we now had the Nos. 5 and 6 picks in the draft. Taking not one, but two players who might not want to play in Minnesota? That would have taken real cojones. We took Rubio and Jonny Flynn, a ready-to-play point guard who started 81 games for us as a rookie and then fell victim to a terrible hip injury. At the time, drafting Flynn made a lot of sense: we didn’t have a single point guard on the roster and our staff had ranked him No. 1 among all point-guard prospects for not only his on-court play, but also his strong leadership qualities, a significant team need.

Whether or not these picks worked or not isn’t relevant in this case. Instead, this is the perfect scenario to show LaVar Ball isn’t the first parent in a long list of professional athletes that have a powerful parent making integral decisions on their young sporting career. In LaVar’s case, his celebrity appearances and Big Baller Brand are symbolic to the image he has created. This up-front persona has made him stand out more than any preceding parent who has driven down the same road.

Everyone can’t be Steph Curry, but his father showed in 2009 that you don’t have to be LaVar Ball to make impactful decisions for your child’s sporting career. It’s just highlighted more when your child is a known commodity instead a player you hope will pan out. At any rate, having a parent influence a basketball team’s decisions based on their operation usually isn’t a recipe for success.

Does seeing that SI story make you change your mind about LaVar and Lonzo Ball? Do you think LaVar’s doing the right thing by his son?