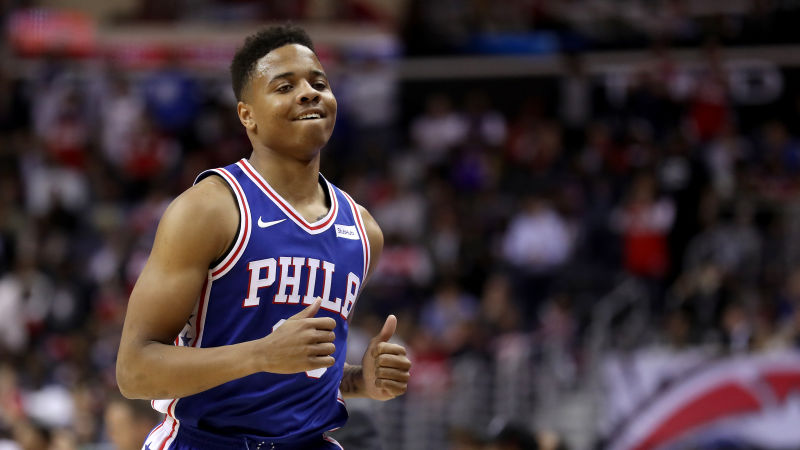 Something isn’t right, so much so that one of Markelle Fultz’s free throw attempts ricocheted sharply off the left side of the backboard during the Philadelphia 76ers’ blowout loss to the Toronto Raptors.

The 76ers’ No. 1 draft choice has been coming off the bench for the team’s first three games and has averaged 7.3 points and is shooting 34.8 percent from the floor. He hasn’t attempted many jumpers, especially the pull-up variety. Fultz have been showing off the spin move and has been getting to the tin, but has been unable to finish. But the jumper hasn’t been there.

Here was that ugly free throw I was referencing earlier.

Fultz may not be finishing consistently at the rim, but had this lovely spin and lefty layup against the Toronto Raptors on Saturday.

Fultz hasn't been finishing at the rim consistently through 2 games, but beautiful spin and touch off the glass with the left hand here. pic.twitter.com/dMxNUcMdzG

Defenders have been sagging off and essentially daring Fultz to shoot, but he hasn’t pulled the trigger. That wasn’t the case during his days at Washington or even the Summer League.

Left wing triple from Fultz with Exum's hand in his face. Exum has provided a nice test for Fultz in the first half. pic.twitter.com/gSOOpuKT5r

Fultz was 64.9 percent from the foul line during his lone season with the Huskies and is connecting on just 47.1 attempts from the charity stripe through three games. His mechanics clearly look like they’ve gotten in his head. Fultz should sit on the bench until whatever is seemingly bothering that shoulder is diagnosed.