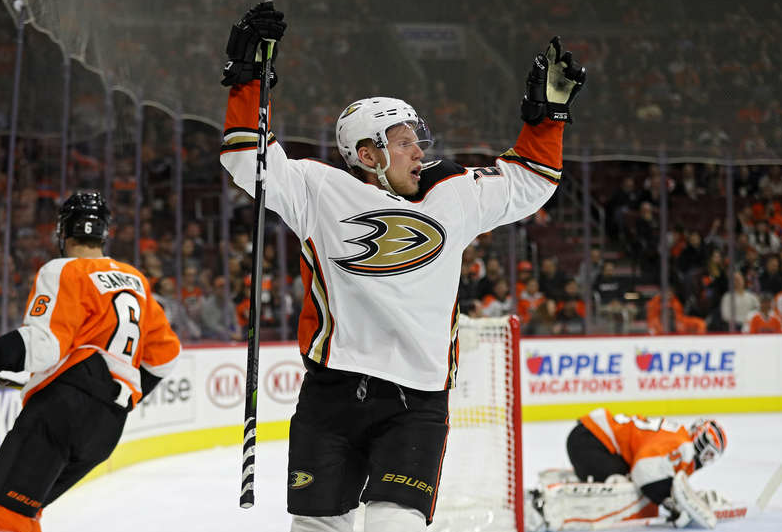 The Philadelphia Flyers faced off against the Anaheim Ducks Tuesday night to end their five game home-stand. The Flyers had won three of four at home going into this one and looked to continue the trend.

The Flyers started Brian Elliott, who has gone 4-1 to start the season while the Ducks got their captain Ryan Getzlaf back for this contest.

The top line continued their excellent play with a goal 8:51 into the game by Sean Couturier off of a great feed from Claude Giroux and Jakub Voracek. Unfortunately, the Ducks took over completely from there. With just 1:38 to go in the first period, the Ducks evened the score with a goal on a deflection by Ondrej Kase.

Kevin Bieksa and Radko Gudas also dropped the gloves in the first period, but Gudas got dropped by Bieksa one punch into the fight. It wasn’t pretty.

Even though the Flyers seemed lucky to end the first period with a tie, the Ducks still took over in the second. The Flyers completely lost a grip on the game, giving up three goals. Ducks defenseman Brandon Montour blew past the Flyers to score a breakaway goal to put his team up 2-1 just 5:40 into the second period, and they didn’t stop there. On a very questionable Wayne Simmonds double-minor, Nick Ritchie potted his first of the season after Brian Elliott gave up a juicy rebound in front on the power play. When it seemed like it wouldn’t get much worse, the Ducks tacked on one more courtesy of Rickard Rakell only 1:43 to go in the second.

The Flyers would get a 5-on-3 power play chance to end the second and started the third with the two-man advantage, but were not able to capitalize. It was the Ducks’ game to lose at that point. Couturier was able to net his second of the game in the third period off of a sweet pass by Travis Sanheim [his first point of his career], but Ducks goals by Getzlaf and Kase cemented their victory.

Elliott didn’t look good at all in this one. It’s his second game in his five starts that he’s given up five or more goals. The third period goals by Getzlaf and Kase [on a penalty shot] were backbreakers, giving virtually no chance for his team to tie it up.

Despite the loss, the most important thing about this game was that the Flyers lost Nolan Patrick. Stay tuned for an update on his condition sometime today.

Who would have thought that Andrew MacDonald brought so much to this team? In his first game out of the lineup, the Flyers gave up a six spot. A bigger storyline or a mere coincidence? Their next few games will likely answer that question.

The Flyers will look to bounce back against a very good Ottawa Senators squad Thursday on the road, and it will be no easy task.