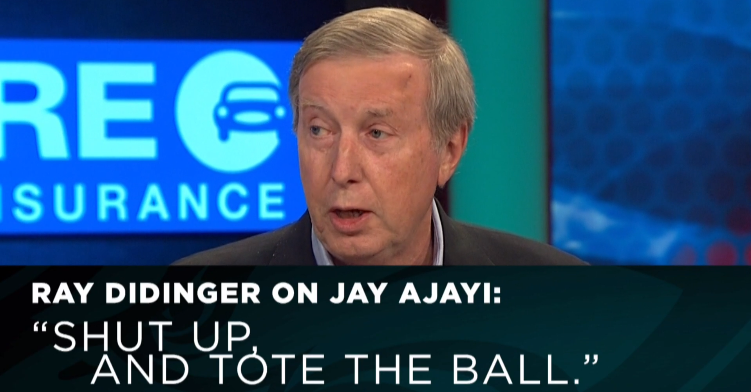 The Philadelphia Eagles are 10-1.

They’re in first place in the NFC East by five games. They just dismantled the Chicago Bears en route to winning by 28 points… and we’re going to let this happen?

I love Ray Diddy, but I’m not sure why this even happened. Why am I even typing about it? Why… why?

Jay Ajayi rushed five times for 26 yards on Sunday, and lost a fumble on a run that he was most certainly going to score on… and luckily, Nelson Agholor was there to snatch it up. Excuse me if Ajayi doesn’t sound extraordinarily happy given that happened

And, for some reason, Diddy’s focused on the fact that Ajayi’s pissed about his touches? Without any evidence? Ajayi didn’t come out and say, “I should’ve been given the ball more,” and, at least to me, he isn’t coming across that way after the game. He knew when he came in, and Doug Pederson has said time and time again, the run game is dictated on how the flow of the game goes.

You don’t hear anyone talking about how Corey Clement was given the ball four times and rushed for 27 yards. This was LeGarrette Blount’s game, given 15 carries for 97 yards. Blount was clearly the most effective back against the Bears. Ajayi’s touches haven’t yet eclipsed 10 in a game, but there’s literally no reason to focus on that right now. Is it possible Ajayi was pissed off at his fumble while speaking to the media? Sure. Is it possible Ajayi was pissed off at being caught from behind? Sure. These are things he’s allowed to be pissed off at without calling him out for whatever reason.

And, it’s not like Ajayi said anything wrong when talking to the media. This is a non-issue.

Come on, Ray Diddy, baby. Don’t be that guy.

As far as Ajayi’s response to that… I think it speaks for itself.