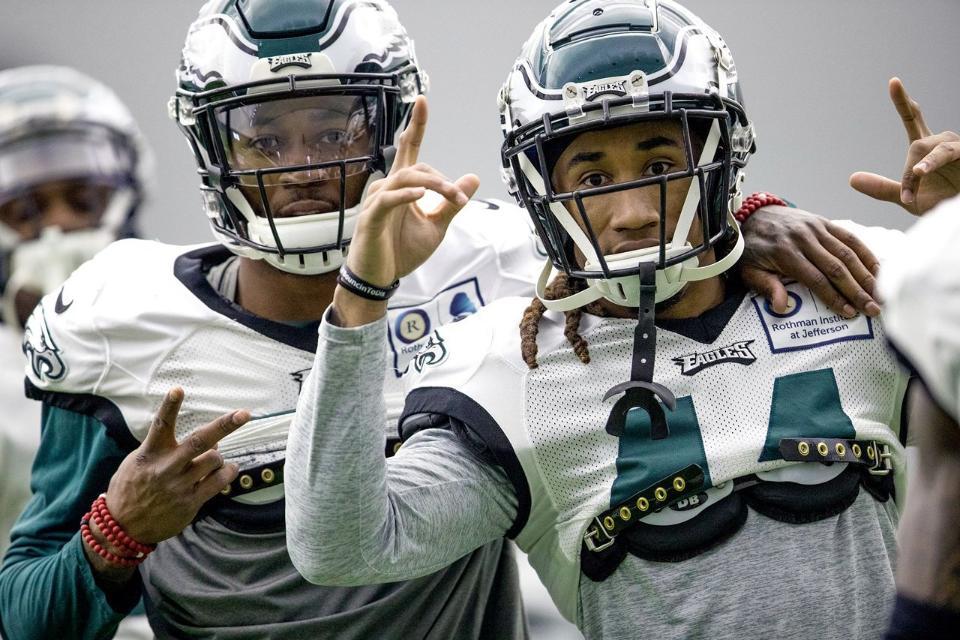 It’s going to take a total team effort for the Eagles to beat the Falcons on Saturday at the Linc. I’m saying the offense needs to get six, sometimes three, and hold on to the ball. The defense needs to hold the Falcons to three, not six. Special Teams needs to…. be special.

I could sit here and highlight what every player on the team can and should do, but that would result in a long, borderline unreadable piece. Here are my five (ish) Eagles that will make a difference in Saturday’s game.

I said it before and I’ll say it again, this is Malcolm Jenkins’ team now. He is the heart and soul of this defense and the locker room. He’s as close to a modern day Brian Dawkins as we can get.

Jenkins is a Swiss Army Knife on defense. He can play free safety, strong safety, linebacker, slot corner, you name it. He will continue to have that role come Saturday. He could be tasked with covering the likes of Austin Hooper, Tevin Coleman, or Devonta Freeman. If we’re being honest, I think these are all matchups that Jenkins can win. He’s an incredibly smart and gifted player and he will shine against the Falcons.

He is without a doubt the main Eagle to watch when the defense takes the field. I guarantee he will be flying all over the field, no matter where he lines up.

2. Jay Ajayi (and the rest of the three headed monster)

The Eagles ran the ball 34 times last year against the Falcons. Ryan Mathews had 19 carries, Wendell Smallwood had 13, and Darren Sproles had two. Assuming the Birds follow a similar game plan, I would expect Ajayi to get 19-20, Blount to get 9-10 touches, and Clement to get around 5.

This Falcons defense is susceptible to giving up big plays on the ground. Last week Todd Gurley ran for 101 yards on 14 carries. Two of those carries were for 26 and 33 yards. I’m not saying Ajayi is the same explosive back that Gurley is, but he does have similar qualities and a knack for breaking long runs. The key is feeding your playmakers. Give Ajayi touches and something big will happen.

Ajayi will be the workhorse back, but I think Doug Pederson and Frank Reich will find ways to get LeGarrette Blount and Corey Clement some touches, both have been exceptional all year long.

It was tough to pick only one of the two. As my colleague Adrian highlighted in our Philly Influencer Live podcast on Tuesday night, Fletcher Cox and Timmy Jernigan will be going against Alex Mack, Wes Schweitzer, and Ben Garland.

We all know that Alex Mack is a Pro Bowl center (if ya don’t know, now ya know!), but that won’t be enough to stop both Cox and Jernigan. The Falcons’ weakest point is their interior offensive line, conveniently enough, the Eagles’ have a very strong defensive line. It will be fun to watch the Birds wreck the Falcons’ offense from the inside out. Look for Cox and Jernigan to get some pressure from the inside.

Alshon Jeffery has been criminally under-used since Carson Wentz went down. In the last three games he has the following stat line: five catches for 57 yards and one touchdown. He had no catches against the Raiders on Christmas.

That’s unacceptable. Alshon Jeffery was brought here to make a difference on offense, he needs to be involved in the game plan. He’s had four weeks to get on the same page as Nick Foles. One of the keys to an Eagles’ victory could be the play of Alshon Jeffery. If he can find a way to double his production from the last three weeks, the Birds will be in good shape.

He won’t need to carry the team in receptions, he needs to come through when he’s targeted. I trust that Zach Ertz will continue to be Foles’ security blanket, just like he was for Wentz.

On an unrelated note, look for Brent Celek to get some targets early, as he is less than five yards shy of hitting 5,000 career receiving yards.

One of these two will more than likely be tasked with shadowing Julio Jones. The other will be on Mohamed Sanu. Atlanta didn’t go out and shred the Rams’ defense, Matt Ryan went 21/30 for 218 yards and a touchdown. 52 of those yards came on a catch-and-run from Sanu.

Mills or Darby will need to keep Julio in check on Saturday. He had a good game against the Rams, 9 catches for 94 yards and a touchdown. If the Birds secondary can keep him to that or less the Eagles will be in good shape.

This is a winnable game for the Eagles. The Falcons will struggle to run the ball against the Birds, just like almost every other team. Our defensive line should be able to win in the trenches, in turn controlling the game. The offense will have a simple job: move the ball and don’t turn it over. Special Teams will do their best to win the field position battle. I have a feeling that Dave Fipp’s unit will get their first return touchdown, too.

I think the Eagles win this one, You can check out the staff predictions post on Friday for a more in-depth prediction.