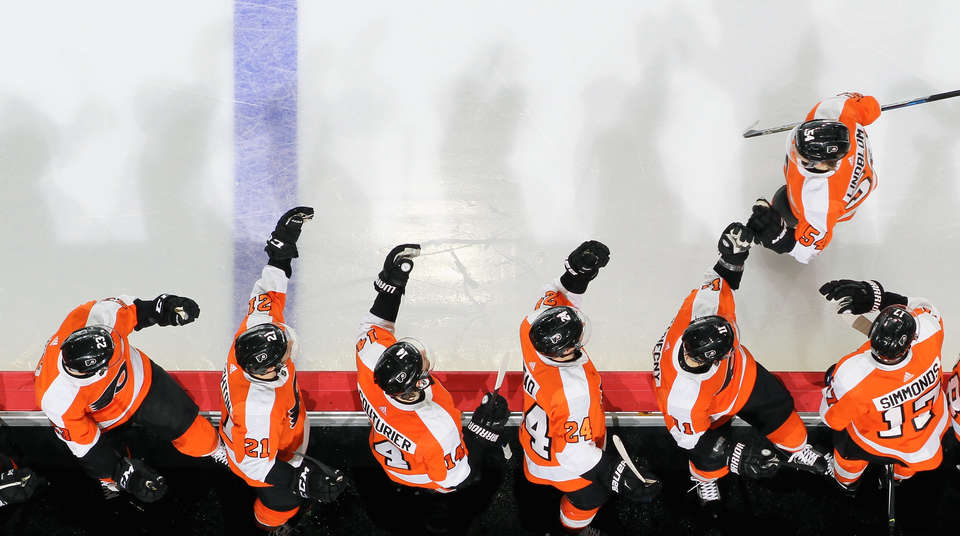 Four goals was enough to get the Flyers past the Rangers and one step closer to a postseason berth. The Orange and Black currently sit at 88 points. This has them in the first Wildcard spot, one point behind the Penguins and Blue Jackets, three points behind the Capitals, six points ahead of the Devils, and seven points ahead of the Panthers who are not in a playoff spot.

The Flyers opened the scoring 7:56 into the first period. Travis Konecny worked into the slot and sniped Alexandar Georgiev. His 21st of the year was as pretty as they come. Claude Giroux and Andrew MacDonald assisted on the goal.

He gets the Flyers on the board first with this shot! pic.twitter.com/9rIddjW7EL

Unfortunately for the Flyers, the lead lasted all of about eight minutes. Mika Zibanejad evened the score for the Rangers on a mini-breakaway chance. That was all the scoring for the first period.

The Flyers got a quick start in the second period as Jake Voracek broke the tie with a nice looking goal of his own. Claude Giroux and Travis Sanheim assisted on the goal.

Jake out here dodging the Rangers like he does it in his sleep.

Less than two minutes later the Flyers extended their lead to two goals as Travis Konecny potted his second goal of the night. His 22nd goal was assisted by Radko Gudas and Claude Giroux.

On today’s episode of Keeping Up With Konecny ?

Jesper Fast scored with about three minutes left in the period. It looked like it snuck right under Lyon’s pad. The Orange and Black took a 3-2 lead into the third period.

To my surprise, the Flyers came out and scored less than a minute into the third stanza. Jake Voracek led Nolan Patrick up the wing, Patrick put a shot on net and Oskar Lindblom buried the rebound for his second career goal. The Flyers second line remains hot and the Flyers had another two goal lead.

Nolan Patrick getting by with a little help from his friend Oskar Lindblom ? pic.twitter.com/yB4VYKg9aW

Jesper Fast got his second of the night shortly after but that was all of the scoring for the night. The Flyers held on to beat the Rangers 4-3.

With four goals, here are my four things worth noting from Thursday night’s win.

1.) Claude Giroux will (probably) set a career high in points.

With three points in Thursday’s game, Captain Claude has hit 90 points for the second time in his career. He is three points shy of tying his high, four points from setting a new high. If I were a betting man, I’d say that G will have more than four points in the next seven games.

I wrote about it earlier this month, but Giroux is having an incredible year. Without beating a dead horse, he should be in Hart Trophy talks. the top scorers in the league are:

If the other four people listed are in talks for the Hart why isn’t the Flyers captain in consideration? Seriously, someone tell me. Keep the underdog theme going, Philly thrives in that role.

2.) I can’t believe Travis Konecny is a Flyer.

This dude is seriously good at hockey. I can’t stress enough how much fun he is to watch. He drives play, can shoot, is fast, and isn’t afraid to throw hands if need be. It’s shocking that he fell to 24th in the 2015 draft. He looks awesome in Orange and Black and, if we’re being honest, if it weren’t for a certain red-headed quarterback, TK would absolutely be the best #11 in Philly. Being second to Carson Wentz is fine with me, though.

From my vantage point it looked like Alex Lyon played an awesome game. He stopped 33 of 36 shots en route to his fourth NHL win.

With a one goal lead on the line Lyon had some of his best work to keep the Flyers in the lead. A series of saves led me to tweet this:

Alex Lyon with his best Dominik Hasek imitation keeps the #Flyers ahead by one. Stoppage in play with 13:08 left in the third.

I know that’s a little sac-religious but when Lyon dove across the crease to stop a Ranger shot I got pretty excited.

What a stop by Alex Lyon! pic.twitter.com/lhE7jywa7G

A diving, shoulder save and a pad save by Lyon keeps the Flyers up! pic.twitter.com/4vSJ6S0DzO

He made a few other nice saves on the night and really earned the win. Stop me if you’ve read this before, I were Dave Hakstol I would ride Lyon until Brian Elliott is back from injury. He’s more consistent than Mrazek and the Flyers need every point they can get.

There have been a few Flyers who have rising stock and some with falling stock. Here’s one of each.

Despite only posting one goal in 11 games, Matt Read has been in Dave Hakstol’s good graces. He’s solidified himself as a viable option on the fourth line alongside Scott Laughton and Jori Lehtera. He’s been driving play and playing good hockey as of late.

In 64 games this season Weal has 17 points. In 23 games last season he posted 12 points. That’s a problem. He hasn’t had a point in six games, he hasn’t had a goal since his game winner in Carolina back on February 6. He had the second least amount of ice time on the Flyers with 11:15. This is something to keep an eye on moving forward. Here’s hoping Weal can work out of this slump and be a contributing member of the team. He showed he has the ability, now it’s time for him to finish.