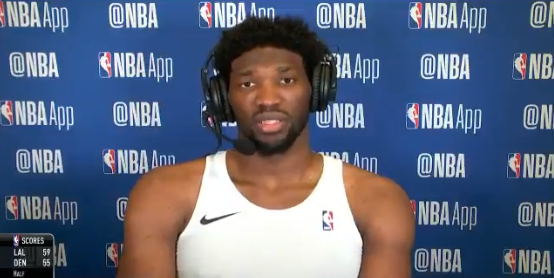 Let’s not beat around the bush, the 76ers can’t afford to be without Joel Embiid for the upcoming postseason.

Before you say “duh,” there is more to this column than the first line. Not only can’t the Sixers afford to be missing their franchise player, I’d argue he’s more important to their success than Carson Wentz is to the Eagles. And it’s not a matter of “potato, potahto” or which injury is potentially more severe long term.

As good as Wentz is, Embiid’s dominance is unique.

Even with the magic Wentz produced in his sophomore season, what Embiid provides can’t be duplicated.

This is no slight to the Eagles quarterback. He’s phenomenal and needed back for the Birds to repeat as Super Bowl Champions. But, the team was able to complete their title journey without him because of their roster makeup and Nick Foles is starter quality.

Richaun Holmes is talented an deserves more minutes. Amir Johnson is a nice veteran backup. Ben Simmons is a superstar. Yet, there is no one on the 76ers who can duplicate Embiid’s skill set, let alone match his production, even for the sprint of a playoff run.

It’s why the aftermath of Embiid’s freak collision with Markelle Fultz against the Knicks is so concerning.

The Sixers won the game because New York is inferior.

Dario Saric stepped up nicely that night because the Knicks can’t defend and “The Homie” is better than outsiders realize. Simmons continued to produce at his typical rate.

That won’t work in the postseason though against the likes of Toronto, Boston, Cleveland, Indiana, Washington, Miami and Milwaukee. Whoever the Sixers face, they will need Embiid.

It’s wishful thinking to believe the Sixers can make noise with Embiid sidelined.

If Embiid returns from this orbital fracture, the 76ers are capable of making a run at least into the second round and maybe the Eastern Conference Finals. At that point, depending on how well they’re playing, anything can happen. The sky is the limit. They’re that talented as long as their superstars are on the floor.

The key words are “as long,” and who knows if that’ll be the case with yet another surgery for the talented big man.

Nice To See Markelle Fultz Back

Embiid’s status aside, Brett Brown presented Philadelphia with quite the surprise against the Denver Nuggets by announcing the return of Fultz out of no where. I went from writing they need to shut him down to avoid distractions, to if you’re going to play him, now is the time with the 76ers easy schedule to close the regular season. Good move by the Sixers and smart decision by Fultz to acquire some experience before his sophomore season. Only one critique for the 19-year-old Washington product and it doesn’t deal with shooting form. It’s probably best not to collide with the franchise player on a botched dribble handoff.

Doug Pederson’s surprise success with the Eagles is a gift for any other coach or manager in Philadelphia sports going forward. Everyone deserves a chance, no matter how skeptical you may be about a particular hire. It’s why one game shouldn’t define Gabe Kapler. However, that doesn’t take him off the hook for extremely costly decisions.

Kapler pulling Aaron Nola after just 68 pitches with a 5-0 lead is naive and micromanaging.

The skipper’s move to walk Freddie Freeman to get to Nick Markakis in the 9th was ill advised. According to Scott Franzke on the Phillies Radio Network, Freeman was 1 for 9 with 3 walks against Hector Neris while Markakis was 7 for 14. Make it 8 for 15.

Lastly, keeping Odubel Herrera out of the Opening Day lineup for Nick Williams and Aaron Altherr goes against the numbers.

All in all, bad first day for Kapler. I think that assessment is kind. Others went a step further.

Gabe Kapler with one of the most poorly managed games you will see. 5-0 lead and he takes out starter Aaron Nola after 5.1 innings and 68 pitches. Trying to impress people with his bullpen moves. #brutal. Saw one tweet with his ridiculous theme #BeBold not #BeAnIdiot #coconutoil

So many mistakes by @gabekapler. Managers can only lose games in a season. And he lost this one with a brutal,pathetic and disgraceful job of managing. Had 5-0 lead against stinkin #braves and wanted to show people how smart he is and bleeped it up. And takes Hoskins out to boot

• The last time all four major professional sports teams made the playoffs in the same year were the 2009 campaigns. It was Donovan McNabb’s final season, Tony DiLeo was interim head coach of the 76ers and John Stevens was still in town. The Birds window was closing with the McNabb and Andy Reid eras. The Phillies failed to repeat as World Champions with a loss to the Yankees. The Sixers were marred in mediocrity of low playoff seeds with Andre Iguodala as their franchise player. The Flyers were struggling to beat the Penguins. The latter hasn’t changed, but at least there’s promise with the Flyers young pieces. The 76ers feature two franchise guys with an unlimited amount of potential. The Eagles are defending champs with the window still wide open and the Phillies, yesterday aside, are on the upswing. Philadelphia sports is pretty, pretty, pretty good these days.

• Speaking of pretty good, Villanova men’s basketball is in the Final Four for the second time in three years. Their 134 wins in the last four seasons is the most over a four year time period in NCAA history. Only Kentucky appeared in more National Semifinals since 2009. The last time the Wildcats lost two in a row was five years ago. I predicted Nova would get to this point and lose to Michigan State. But along the way over the past two weeks, I privately joked the Cats would choke. I expressed the same doubt when they won the whole thing in 2016. Last year, I crowed about Jay Wright on this web site, and they lost in the first weekend. Don’t be mistaken, I still think Wright is great, but poor shooting won’t get them by Kansas. And if they’re lucky again, an off day definitely won’t work against Big 10 Champ Michigan or Cinderella Loyola-Chicago. San Antonio will be a short trip for Nova. They won’t make it past Easter. Not a chance … You see what I’m doing here?