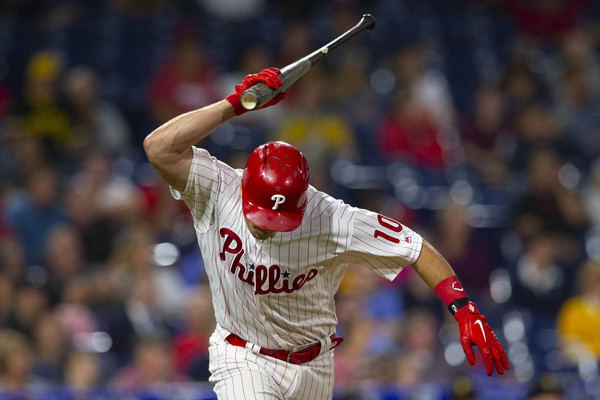 At the start of the new baseball year the Phillies found themselves without a true general manager, no offense to Ned Rice, and in turn, missed out on a few free agents namely Charlie Morton who went to the division rival Braves.

Then Dec. 11 came and the Phillies inked former Red Sox, Tigers, and Marlins front officeman Dave Dombrowski to a four-year contract to head their baseball operations department. Love him or hate him, with a bonafide baseball guy at the helm the Phillies are surely in play for their fair share of free agents. Here are six that could, and should, be signed.

But on a serious note, with James McCann signing a four-year, $40 million deal with the Mets the price for Realmuto has all but set itself.

The number Realmuto’s camp is aiming to hit is north of 23 million AAV, see Joe Mauer’s eight-year, $184 million contract. This leads me to believe five years and $120 million should get the job done ($24 million AAV).

He’s the best catcher in baseball and the team is better if he’s here. The catching market is dwindling with McCann and Mike Zunino signing recently. It’s that or the Phillies deal with 162 games of Andrew Knapp and Rafael Marchan. Seems like a no-brainer to me. #SignJT

I was tempted to write in Didi Gregorius but I don’t think he and the Phillies are a fit necessarily. Where Didi will be 31 to start the next season and looking to sign a longer deal with more guaranteed money, I don’t think the Phillies would oblige as they have a shortstop in the pipeline in Bryson Stott and are committed to infielders Jean Segura and Scott Kingery long-term.

Enter Kike Hernandez, the super utility player from the world champion Dodgers. He isn’t going to light up the stat sheet – he slashed .230/.270/.410/.680 with five home runs and 20 RBI on a deep Dodgers team – but he can play damn near every position on the diamond which is incredibly valuable.

As far as a contract goes, I look at Marwin Gonzalez a super utility guy who is roughly the same age (31) who signed last season at 2 years 21 million dollars. Hernandez will be 29 at the start of next season and under normal circumstances would command a similar contract. In these uncertain times, I think the price can, and will, be lower than that. Hernandez is coming off a one-year, $5.9 million deal which leads me to believe a 3-year deal worth roughly 18 million dollars should get the job done.

The Phillies bullpen was outright bad last year. There are no other words. These four names are interesting for different reasons which I will outline below:

Hendriks and Hand have been dominant in the ninth inning in the past two years. They are textbook examples of paying for past performance in hopes they’ll replicate. Since 2019 Hendriks has 39 saves, 161 strikeouts and a sub-2 ERA while Hand has 50 saves, 113 strikeouts, and a 2.68 ERA in the same time period.

Bradley is an example of buying based on upside. He’s not a “true” closer, he still has upside as a high leverage arm, posting 105 strikeouts and a 3.24 ERA in the past two seasons. It’s worth noting in six appearances with the Reds last year he had six saves, a 1.17 ERA, and six strikeouts over 7.2 innings.

Doolittle is the buy-low bounceback option of the list. The closer on the world champion 2019 Nationals team who posted three 20+ save seasons in a row in the nation’s capitol, had a down year last year. He appeared in 11 games, was credited with 2 losses and no wins and pitched to the tune of a 5.87 ERA. Yuck. Doolittle will be 34 at the start of next season which could scare away some teams.

As much as my heart wants Hand and/or Hendriks, if I’m the Phillies I try to buy low on Bradley and Doolittle. They can’t go wrong so long as they add two of those arms to the bullpen.

H/T Jon Morosi for this one.

Free agent Jackie Bradley Jr. is drawing interest from the Phillies, Cubs, and Blue Jays, among other teams, as I mentioned this morning on @MLBNetwork. Bradley, 30, is coming off a season in which he posted a 118 OPS+, his best since 2016. @MLB

The connection with new president of baseball operations Dave Dombrowski is there. I have no strong feeling on this – I wouldn’t break the bank to bring in Jackie Bradley Jr., but I’d welcome him with open arms, if that makes sense.

For a team with other holes to fill, like catcher and the bullpen, and a team strapped for cash so to speak I would rather throw money elsewhere and roll with the combination of Adam Haseley, Roman Quinn and Scott Kingery in centerfield.

This one is surely worth keeping an eye on.

The Phillies starting pitching has been just as erratic as the bullpen. Aaron Nola, Zack Wheeler, Zach Eflin and Spencer Howard are four of your starting pitchers next season. The team brought back Vince Velasquez, too. If you ask me that’s too many question marks outside the top three which means another starting arm needs to be added.

After a breakout, all-start season in 2019 where he had 30 starts and a 3.51 ERA with 178 strikeouts and 53 walks, he fizzled in 2020 with four starts and a 6.59 ERA. Like Doolittle above Odorizzi could likely be had on a one-year prove-it deal because of his age and 2020 performance. Slide Odorizzi into the fourth spot, bump Howard to the fifth and Velasquez to the bullpen where he has spot start ability and boom, everybody wins.