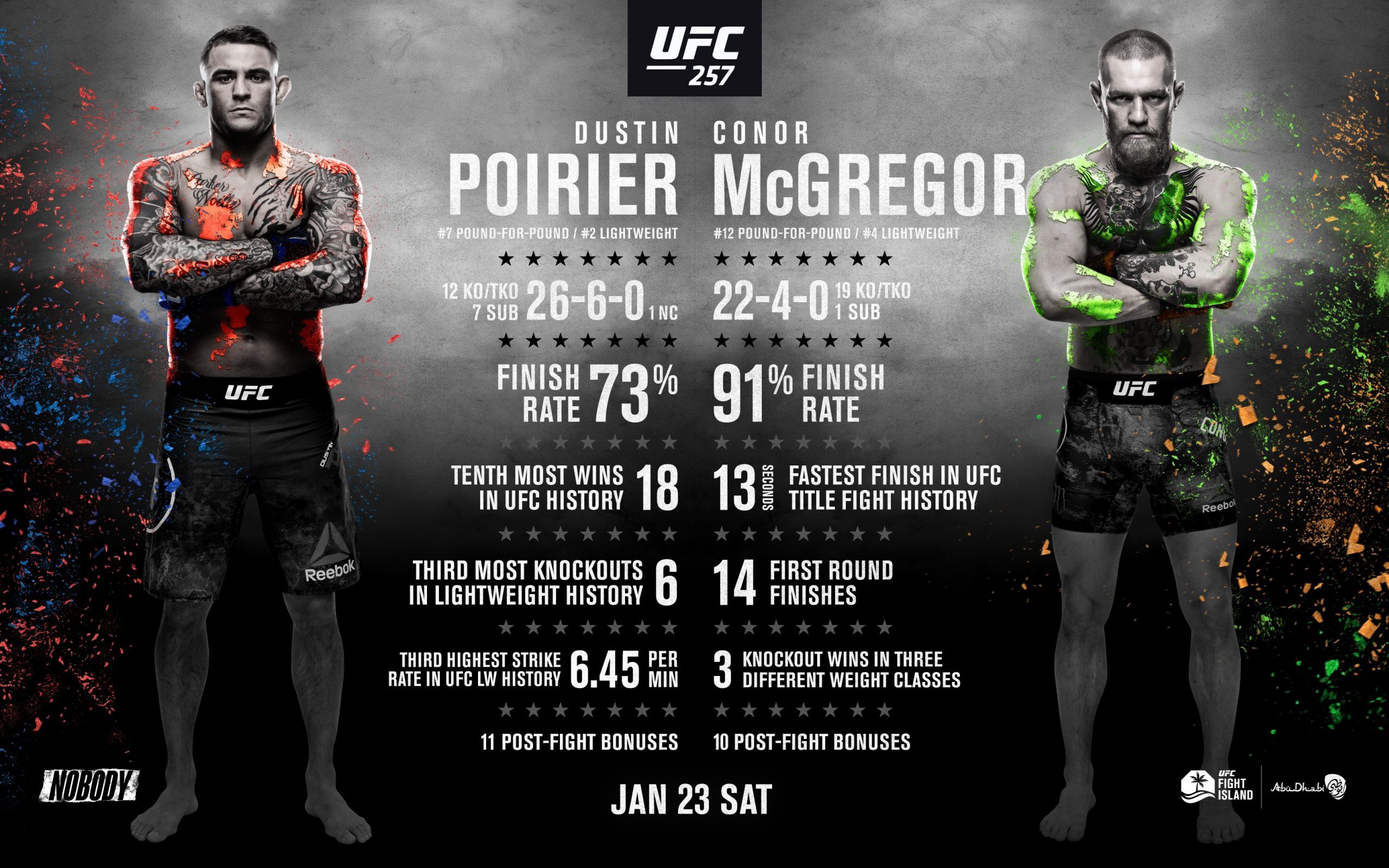 The biggest name in mixed martial arts is returning after a one-year layoff to face-off against one of the most talented fighters in the lightweight division.

Conor McGregor defeated Dustin Poirier by a first-round TKO back in Sept. 2014 and the two went on different career trajectories afterward. After knocking out Poirier for his fourth consecutive win in as many fights in the octagon, The Notorious became a bonafide rock star, winning his next three en route to a knockout win over Jose Aldo to snatch the featherweight belt. From there the rest is history for the Irishman.

The loss to McGregor is well documented as the fight that turned Poirier’s career around. He turned that loss into an 8-2-1 stretch facing a murderer’s row of fighters in Eddie Alvarez, Max Holloway, Justin Gaethje, and Anthony Pettis. Granted, he’s 1-1 in his last two with a win over Dan Hooker and a loss to former champ Khabib Nurmagomedov.

Any time McGregor fights, the world watches. Let’s get to the preview – all odds courtesy of the Draft Kings Sportsbook

In what is quite possibly a title eliminator fight in its own right one of the most fierce strikers in the lightweight division, Dan Hooker, squares off against former Bellator champ, Michael Chandler.

How did we get here? For Hooker, it dates back to 2017 in a fight against Ross Pearson, his return to lightweight, where he knocked out Pearson in the second round. He rattled off three more consecutive finishes over Marc Diakiese, Jim Miller and Gilbert Burns through July 2018. He lost his next fight to a red-hot Edson Barboza but went on another three-fight win streak over James Vick, Al Iaquinta and Paul Felder. This led to his Fight of the Year worthy bout against Dustin Poirier last June – a fight he lost by decision, though it was an absolute barnburner.

Chandler, on the other hand, was the homegrown face of Bellator – a three-time champion – before his release late last year. Once he hit free agency there was speculation to who his first fight in the UFC would be. Would he step in for Justin Gaethje or Khabib Nurmagomedov? Would he coax Tony Ferguson to sign on the line? Turns out he is Hooker’s Huckleberry.

Though the competition difference in Bellator can be stark at times, it still takes a great amount of talent to run through a division and be as dominant as Chandler was in Bellator. He holds wins over former UFC champions Eddie Alvarez and Benson Henderson. He’s a collegiate All-American wrestler with a nasty set of hands to boot.

This fight has “Fight of the Night” potential. The two combine for 24-stoppage victories in their professional careers (UFC only for Hooker, Strikeforce and Bellator for Chandler) and as I said earlier, this fight does have title implications. You don’t bring in Michael Chandler if you don’t think he can compete for the belt and Hooker is a few punches away from holding a win over the second-ranked lightweight in the world in Poirier.

I bet someone goes to sleep: Hooker by KO, TKO, submission or DQ is +175, Chandler by the same is +320. Don’t sleep on Chandler, though, a few bucks on his moneyline could go a long way if he grinds out a decision win over “The Hangman.”

Mazziotti’s play: The fight to not go the distance at -125. My gut says Hooker by stoppage at +175 though it could change at the eleventh hour.

The rematch 6-and-a-half years in the making.

Poirier and McGregor are two of the best fighters the lightweight division has ever seen – that’s a fact. One can argue that there isn’t a better striker in the promotion than McGregor and no one’s shown more heart inside the octagon than Poirier. With that said, the two fighters are as different as they come outside the octagon.

McGregor chased the next big payday at every turn since winning the featherweight belt he never defended. He fought Nate Diaz at welterweight (170 lbs.) four months after winning the 145 pound belt, a fight he lost by submission. He and Diaz fought again five months later, a loss McGregor avenged. He then called out lightweight champion Eddie Alvarez and won by first-round knockout two months later. He boxed Floyd Mayweather and lost in 2017, got submitted by Khabib Nurmagomedov in 2018 and knocked out Donald Cerrone this time last year.

Poirier, on the other hand, has been non-stop, fighting and training like he’s running out of time. He’s fought at least twice a year since his loss to McGregor in 2014 with the exception of last year where he only fought once. He holds notable wins over Justin Gaethje, Eddie Alvarez, Dan Hooker, Max Holloway and Anthony Pettis.

Personally, I think the Conor McGregor by finish prop bets are an absolute trap at -200. There’s no real money to be made on McGregor per se. My favorite prop for this fight is for it to go the distance at +300. This fight has the feel to me that Dustin won’t go down – I saw him absorb some strikes from Hooker in his last fight that would have dropped a lesser man. He is heart personified – he might lose 5 rounds unanimously but in my heart of hearts I don’t think he gets knocked out.

Mazziotti’s play: Man, I used to be the biggest McGregor hater – and I still kind of am. I think he’s a magnificent striker, a great heel and a hell of a business man but I think as a fighter he’s a bit overrated. Poirier isn’t the same guy that got knocked out 6-and-a-half years ago. I’d play the Poirier moneyline and the fight to go the distance. Would I be shocked if McGregor is the guy getting his hand raised when alls said and done? Hell no, dude’s a good fighter. But tonight when the lights are on, it’s the Diamond’s time to shine.