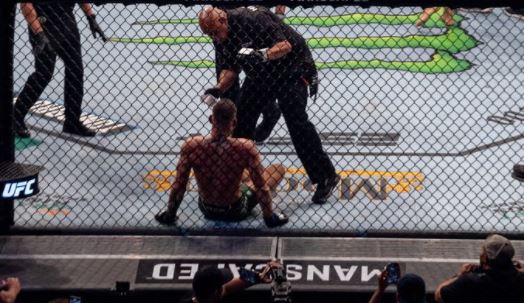 We’re back at it again with an all new Brew. It was a wild weekend that saw Conor McGregor break his ankle in a TKO loss to Dustin Poirier, and Ben Simmons get eviscerated at the ESPYs on national television. The MLB All-Star Game is almost upon us and a terrifying plot was uncovered just down the road from the game’s location. The Atlanta Braves suffered a major loss to their lineup. We have this and so much more, so let’s get to it.

A #Phillies fan I met up with at Fenway today sent me this. This happened last night. Vince Velasquez was not happy after a fan called him “pathetic.” pic.twitter.com/53LZL8mteL

Speaking of the new head coach…

Step on the practice field with Coach Sirianni during his first Rookie Minicamp in this edition of Audible, presented by @DraftKings.#FlyEaglesFly pic.twitter.com/CW0bA8BiNQ

Can’t wait to see this guy on Sundayspic.twitter.com/PcE9cV33D9

Ben Simmons, on the other hand, was roasted

I think Simmons will be okay, though

Multiple reports indicate the T-Wolves are interested in Ben Simmons.

Here’s everything you need to know about what Simmons would bring to Minnesota, what Philly would get in return, and my verdict on potential trades:https://t.co/NlVES0dP25

Seth Curry does NOT want the #Sixers to Trade Ben Simmons

“I love playing with Ben… he’s still a great player, he obviously had a rough playoffs… I look forward to playing with him again”#BenSimmons pic.twitter.com/uhyN6YnNZA

An injury to Conor McGregor’s leg forced a Doctor’s Stoppage in the #UFC264 main event.

This is hard to watch

How did @TheNotoriousMMA bone not pop through the skin 😳 #UFC264 pic.twitter.com/prRsbmG7mg

“Your wife is in me DMs”

Conor McGregor with a broken ankle/leg, says it’s not over. And that Dustin’s wife is in his DMs pic.twitter.com/mzEJmfkZG6

“We are going to fight again…” – @DustinPoirier wants to run it back once more with Conor McGregor after #UFC264 pic.twitter.com/doHFKkyazB

Poirier’s wife wants to get her some, too

They don’t call him “Money” for nothing

@dustinpoirier , thanks for getting me paid! pic.twitter.com/ky7OdNGWt4

Before the McGregor fight, Paul shows off a new chain

Jessica Eye transcended into the next level and opened up her third eye in the octagon 👁️ #UFC264 pic.twitter.com/wKUY7axpa5

Another angle of the wound

Nick Fuentes, the leader of a white nationalist group embraced by Republican Paul Gosar, has been suspended by Twitter — one of the last platforms that had yet to banish him. https://t.co/PtOeqmgOr7

Here’s a sample of that turd

Nick Fuentes says women shouldn’t work or vote. He states that he wants us to go back to the 1950s. pic.twitter.com/sqgCRVe6R8

Nick Fuentes and his crew as they entered CPAC. pic.twitter.com/mayEegp2OX

As per usual, CPAC had a bunch of lunatics speaking

Don the Con Jr. made an appearance in Dallas

Was this Don Jr. event at the Dallas CPAC as well? pic.twitter.com/ztaPV1VT28

This weasel is such a liar

An Australian government ad for COVID-19

Marilyn Manson is in the news for the wrong reasons again

Marilyn Manson surrendered to police in Los Angeles last week in connection with a 2019 arrest warrant out of New Hampshire where he allegedly assaulted a videographer at a concert, authorities said.https://t.co/RirgCb4mg8

Tatis, Jr. is for the people

Tatis is for the people 🙌 @brwalkoff

Terrible news for Ronald Acuña and the Braves

Atlanta star Ronald Acuña Jr. has a torn ACL in his right knee and will miss the rest of the 2021 season. He’s expected to be out for 9-10 months.

Here was the injury

“They are the reason that I am where I am today”

20-20-20. What a privilege it has been watching all three 🙏#Wimbledon pic.twitter.com/DRMa1no6Xr

This is just… WOW!

this angle of simone biles is 🤯 pic.twitter.com/yd4mwPRRzH

Drake’s date night with Johanna Leia at Dodger Stadium was caught on video via drone 🤯 pic.twitter.com/SziISaxxVU

BREAKING NEWS: @itsBayleyWWE has suffered an injury while training and will be out approximately nine months.

A replacement for her match against @BiancaBelairWWE at #MITB will be announced tonight on #SmackDown.https://t.co/qLsf8KTHNp

“nWo Week” just wrapped up, and who could ever forget how it all started…

#OTD: 2⃣5⃣ years ago, @HulkHogan betrayed WCW by joining @RealKevinNash and Scott Hall to change the industry forever with the nWo. pic.twitter.com/1hzX38X3Pc

The nWo made their WWE debut

Which defection shocked you the most?

Which of these #nWo defections shocked YOU the most? #nWoWeek pic.twitter.com/GY3Abd7Vfw

The Mighty Quinn threw out the first pitch at today’s game ❣️ pic.twitter.com/9btrrp3yeq

Well, that didn’t go as planned