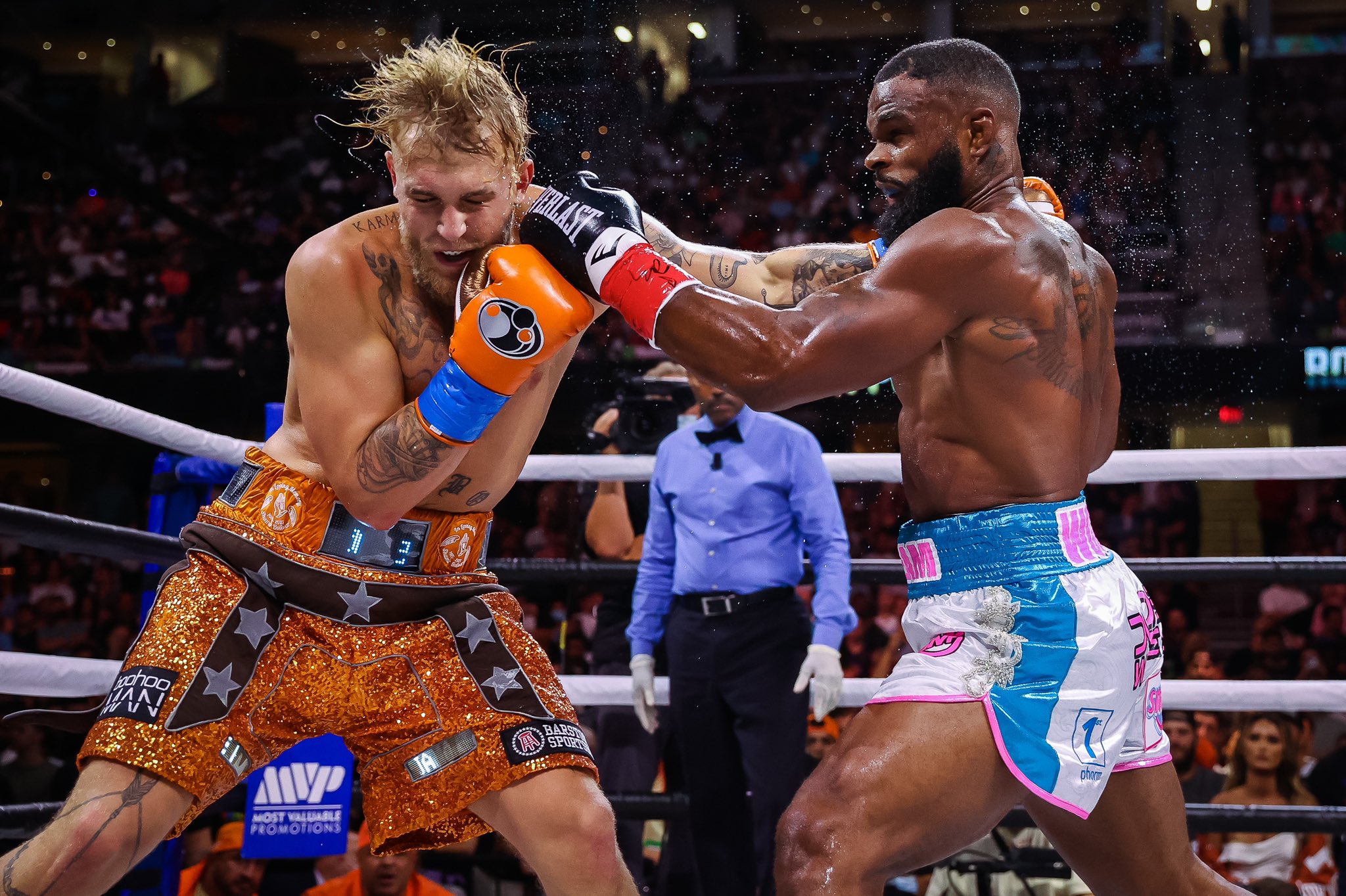 We’re back at it again with an all new Morning Brew. The Eagles traded for some insurance at the quarterback position and acquired Gardner Minshew. Don’t be surprised if Minshew mania runs wild on you. Jake Paul fought Tyron Woodley and people of course are questioning if the fight was rigged.. Meanwhile, category 4 Hurricane Ida devastated New Orleans and South on Sunday causing flooding, power outages, downed trees and more. We have a lot to get to, so let’s not keep you waiting any longer. It’s Brew time.

Trade: #Eagles have acquired QB Gardner Minshew from Jacksonville in exchange for a conditional sixth-round pick in 2022.

Eagles just landed a 25-year old QB that has completed 62.9% with 37 TD, only 11 INT, and 93.1% rating in his first two seasons for a stinking 6th round pick. Gardner Minshew is a winning NFL quarterback. Absolute no-brainer deal for Howie Roseman.

the Jags were VERY DUMB to limit Trevor Lawrence’s reps in practice & games to work in time for a guy you were going to trade…for a 6th???

Minshew is better than you think

Here’s what is headed our way…

The most electric play of the Gardner Minshew Era… ⚡️ pic.twitter.com/12hUK74JVh

The scouting report on Minshew

From the archives: The scouting report on new #Eagles QB Gardner Minshew coming out in the 2019 NFL Draft was “the perfect backup quarterback.” pic.twitter.com/qakQie5SOn

Eagles tie the Jets in the final preseason game

Tyron Woodley had Jake Paul stuttering during this interview (via @ShowtimeBoxing) pic.twitter.com/SwXB6LeiRH

Jake Paul is such a dork!

On Sunday night, @JakePaul and @TWooodley settle the score in the ring. #PaulWoodley

Do you agree with the judges? pic.twitter.com/EI9hGMbpIS

Say it louder for the kids in the back, Mike!

I don’t know why Tyron wouldn’t go harder in the last round especially. Unless….you know 😂 fix?

Rapaport was on a roll

Tyron Woodley winding up his fist like a toy before he punches Jake Paul is the funniest thing i’ve seen in a min pic.twitter.com/5ANvy411QI

These guys both suck

16 years to the day that Katrina hit New Orleans, Ida pounded the South

Hurricane Ida has been rapidly intensifying, becoming a dangerous Category 4 hurricane on track for a potentially devastating landfall on the Louisiana coast. The system’s top winds grew to 150 mph as it moved through the northern Gulf. https://t.co/DXRrddPFBV

BREAKING: the nightmare scenario we feared with Hurricane Ida is happening. All of Orleans Parish (New Orleans) is without power, due to catastrophic damage at Entergy transmission facilities. pic.twitter.com/aw7AIOGwyC

JUST IN: The Mississippi River is flowing in reverse as Hurricane Ida forces vast volumes of sea water ashore https://t.co/5XXCUnmT9I

In 3.5 hours since landfall, #HurricaneIda has only traveled 26 miles!!!

That’s an average speed of only 7-8 mph 😠 pic.twitter.com/OacZmKZdPO

FLOODING in NOLA: Look at this in Venetian Isles in @CityOfNOLA. This is one area in New Orleans under a *mandatory* evacuation. Venetian Isles, Lake Catherine & Irish Bayou; areas outside the levee protection system. Water is almost up to the stop sign 🥺 @wdsu #HurricaneIda pic.twitter.com/RQ8uMwpWRJ

More video from the storm

The tree didn’t stand a chance

A viewer sent me these from #MorganCity . Hope no one was hurt. #HurricaneIda #Louisiana pic.twitter.com/tbdMnZLcBr

Stunning video taken from inside the eye of #Ida this morning by the NESDIS Ocean Winds Research team during a flight on the @NOAA_HurrHunter P3 aircraft @NOAASatellites pic.twitter.com/sjt970Yeiq

What in the world???

People can be so stupid sometimes

Things are about to get juicy

NEW: The Select Committee has send demands for records related to #January6th to 15 social media companies.

“MAGA” doesn’t seem to back this blue…I wonder why???

The Taliban condemned the attack outside Kabul’s airport, saying it occurred in an area controlled by U.S. forces. The attack was believed to be carried out by Afghanistan’s Islamic State group affiliate, separate from and more radical than the Taliban. https://t.co/v6zdncUT7z

2 high-profile ISIS targets killed, 1 wounded in over-the-horizon counterterrorism operation conducted Friday in Afghanistan, Maj. Gen. William Taylor says. “We will continue to have the ability to defend ourselves.” pic.twitter.com/qmiQXwt1OG

What’s the lesson of Afghanistan? Maybe it’s that everyone from the giant dorm room bitch session that is the internet should take a good look at what real oppression looks like. #Wokeistan #WakeUpCall pic.twitter.com/HoNJkucheF

Your 1 year reminder that Kyle Rittenhouse is a domestic terrorist

One year ago today, Kyle Rittenhouse, who was 17, crossed state lines to “protect” Kenosha businesses during Black Lives Matter protests. He illegally procured an AR-15, and used it to kill two protesters.

He’s a domestic terrorist; not a hero. https://t.co/RkPJFrUiCC

THESE COPS TELL KYLE RITTENHOUSE TO “GET SOME” 15 MINUTES BEFORE HE KILLS pic.twitter.com/S16pab074R

GOP Rep. Madison Cawthorn sent a letter to VP Kamala Harris, cc’d to the rest of the presidential line of succession, urging them to invoke the 25th Amendment to remove Biden: pic.twitter.com/JVZ7YJUlS3

Cawthorn really needs to attend to his own affairs

Over 160 Students at a Christian College Have Signed a Letter Accusing Rep. Madison Cawthorn of Sexual Harassment https://t.co/FpQCDwMK5X via @relevant

Josh Hawley is a true Republican

Josh Hawley Was in Favor of Withdrawing From Afghanistan Until Joe Biden Did It https://t.co/mJqB3wekln Follow @newrepublic

Just put the damn mask on

Just wear a mask… don’t be this moron. #Florida pic.twitter.com/tnYrhOZk0y

Another look at that FILTHY goal from @LAFC‘s Brian Rodríguez 😳🔥 pic.twitter.com/38GCjQ0zSj

CM Punk teased Daniel Bryan in #AEW. The fans chanted “YES!” and Punk said “that’s someone else’s shtick and you may have to be a bit more patient.” #AEWDynamite pic.twitter.com/ZsHLH6zz2I

The Nature Boy returned to the NWA

The refreshing moment when a guy leaves WWE, gets the mic at another event and PRAISES them instead of burying them.

He’s telling stories, he’s putting folk over, @RicFlairNatrBoy is having a wild time and so am I!

The NHL family mourns the passing of Jimmy Hayes, who appeared in over 300 games with the Blackhawks, Panthers, Devils and his hometown Bruins. Our thoughts and prayers are with his family. pic.twitter.com/j48KHqcNgP

Kevin Hayes reacts to the death of his brother

Kevin Hayes on the passing of his brother, Jimmy. pic.twitter.com/B9lCFBV3zp

Donda was released and Kanye West is whining

seems like drake just announced on sportscenter that ‘certified lover boy’ is dropping next week 😭😭😭pic.twitter.com/82itcg9ELt

The Mets are a mess

The New York Mets just put out a statement in which the team president said it’s OK for fans to boo, it’s not OK for players to mock their fans for booing and there’s going to be a team meeting to address this. pic.twitter.com/xWNj3NFoBu