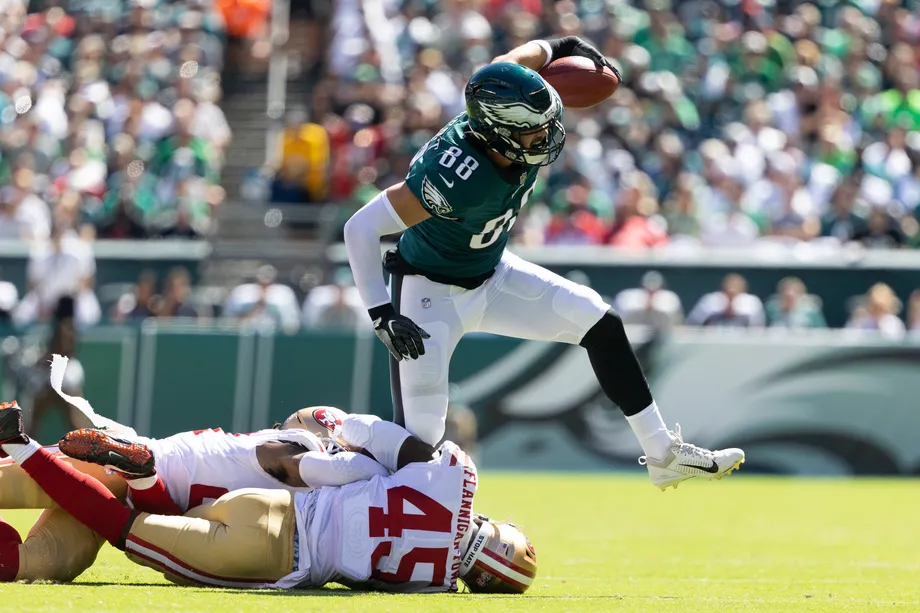 The Philadelphia Eagles excelled in the redzone during a lopsided Week 1 win, but struggled for most of Sunday’s 17-11 loss to the San Francisco 49ers.

Jalen Hurts totaled 272 yards for Nick Sirianni’s offense at Lincoln Financial Field, but the Eagles failed to make the most of their offensive possessions in the home-opening defeat. 49ers quarterback Jimmy Garoppolo threw for 189 yards and one touchdown and also ran for one as Kyle Shanahan’s side moved to 2-0 for the first time since 2019.

It was Philadelphia who struck first as Jake Elliott’s 45-yard field goal gave the Eagles a 3-0 advantage in the opening quarter. However, the Eagles failed to take advantage of a 91-yard connection later in the half between Hurts and Quez Watkins, failing to score on four-consecutive downs from inside the San Francisco five-yard line.

San Francisco took a 7-3 lead into halftime as Garoppolo connected with Juwan Jennings for an 11-yard score, a lead the visitors would not relinquish on the day.

Garoppolo added to the 49ers lead in the third quarter, sneaking a rush in from the one-yard line to extend San Francisco’s lead to 14-3.

Robbie Gould’s 46-yard field goal in the fourth quarter extended San Francisco’s advantage to 17-3, but the Eagles would cut the deficit to eight points later in the dying stages.

Hurts’ one-yard rush paired with Kenneth Gainwell’s two-point conversion rush ended the final score at 17-11. The Eagles defense had a slight chance to give the offense a late opportunity to steal a victory, but Garoppolo’s quarterback sneak on third-and-one killed the Eagles chances to get the ball back with zero timeouts remaining.

QB1 caps off the drive with a score.#SFvsPHI | #FlyEaglesFly

Up next for the Eagles is a division trip to rivals Dallas in Week 3 while San Francisco hosts Green Bay.