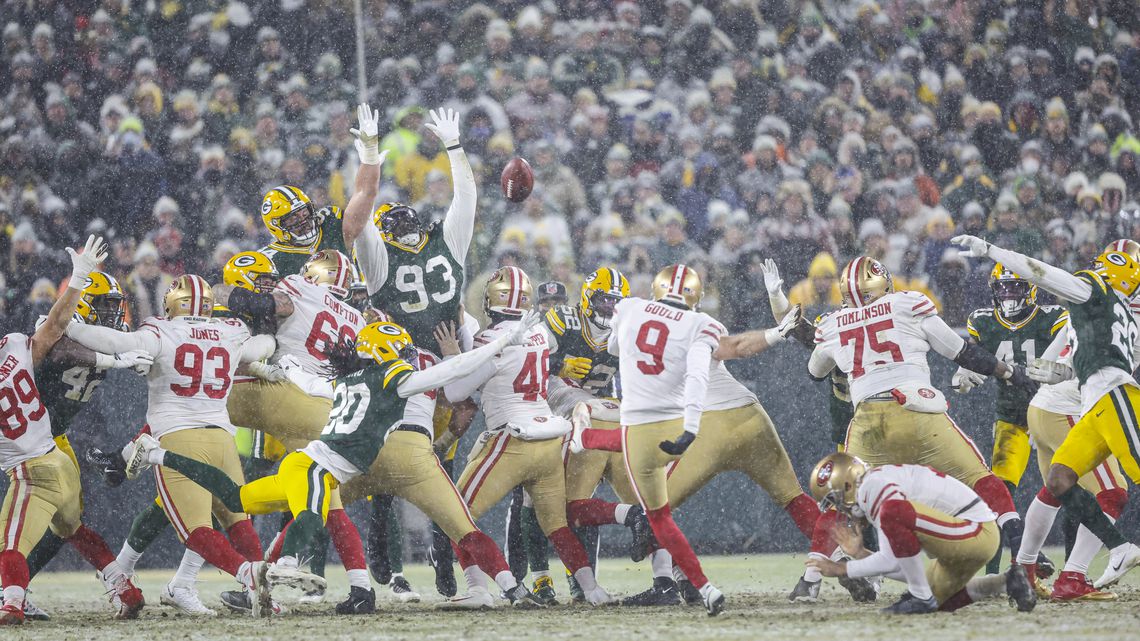 We’re back with a new Brew. It was another wild weekend with the NFL Playoffs and perhaps the greatest weekend in NFL history. Championship Sunday is all set. Both Aaron Rodgers and Tom Brady’s seasons are over. Joel Embiid has been playing lights out lately. The trade deadline is looming in the NBA, but will Ben Simmons still be on the 76ers after it?  So let’s get right to it. It’s Brew time!

The Rams eliminate Tom Brady and the Bucs

.@CooperKupp put the team on his back.

Walked it off in Wisconsin!

The play that changed the game

BLOCKED PUNT INTO THE ENDZONE!

We’ve got ourselves a game 😱

A field goal for the win

THE @49ERS WIN IN LAMBEAU TO ADVANCE TO THE NFC CHAMPIONSHIP. #FTTB #NFLPlayoffs pic.twitter.com/7JouarMybq

every corner of twitter coming together to dunk on aaron rodgers pic.twitter.com/wK305VaUbF

Everyone stop making fun of Aaron Rodgers, he hates being needled.

Next week in Hollywood

California showdown for the NFC Championship 🌴@49ers vs @RamsNFL. See you in LA! pic.twitter.com/F8gzVq5Pj3

The Bengals stun the Titans

This catch by AJ Brown…wow!!!

Are you kidding me?

TYREEK HILL GOES ALL THE WAY. CHIEFS RETAKE THE LEAD IN JUST 52 SECONDS.

And this set up the game tying field goal

kelce gets the #Chiefs into field goal range and we are going to overtime! absolute madness pic.twitter.com/ZOZqrwOXuS

Kelce for the win

THE @CHIEFS WIN THE GAME OF THE YEAR! #NFLPlayoffs #ChiefsKingdom pic.twitter.com/9eM2Ur15O0

Mahomes with a spectacular throw

Heartbreaking loss for the Bills

All four games decided on a walk off play.

Football is the absolute best.

Bengals at Chiefs next week

THE AFC TITLE GAME IS SET 🔒

The Bengals will meet the Chiefs for a chance to head to the Super Bowl! pic.twitter.com/puYNJdPMSa

This is going to be great!

Watch these five music titans get ready for the #PepsiHalftime Show on Feb 13th.

Joel Embiid is the MVP in our hearts and on the charts https://t.co/VaDNBAhoJT pic.twitter.com/lBF3YiVUTe

The NBA should be talking more about Embiid in MVP conversations.

Will he ever be traded?

The clock is ticking ⏰

Something has to give here

Less than three weeks from the Feb. 10 NBA trade deadline, the Philadelphia 76ers haven’t made much headway in their attempt to find Ben Simmons a new home https://t.co/NaC8KiYPPG

Would you take Sabonis for Simmons?

My official prediction for a Ben Simmons trade…

BS + a protected 1st to Indiana for Sabonis + Lamb’s expiring.

Indy jumpstarts the 2022 tanking process. Philly super-sizes w/ a top-35 guy (and if it doesn’t work, a summer trade asset). They *cannot* waste this Embiid season.

The audacity of Doc here

“Would you ask Pop that question? No you wouldn’t.

So don’t ask me that question. I’ve earned that.”

Doc Rivers when asked how much of a 24-point blown lead was on coaching #Sixers pic.twitter.com/uOEhEQXU2L

Trade Beal to the Sixers

The Sacramento Kings organization has a current mindset: They are not moving star guard De’Aaron Fox and want to center team around Fox and second-year guard Tyrese Haliburton, sources say.https://t.co/KVoRC7gdyF

For anyone who wants the clip. Here it is. Minority Leader McConnell says the quiet part out loud. https://t.co/82sI1ehSot pic.twitter.com/0Wuf1l0icf

I hope you don’t believe a word DeSantis says

He is determined to ride to national power on the votes of the most stupid and paranoid among us, while we hear about how he’s really just responding to the legit concerns of the Forgotten People. https://t.co/zjGY1hcCls

BREAKING: CIA says that the mysterious symptoms known as Havana Syndrome are not the result of a sustained global campaign by a hostile power aimed at hundreds of American diplomats and spies. https://t.co/HBrcmTS6tQ

Someone is going to whine about this

There it is! The guy that’s offended by everything brown is the first to cry

Tucker: M&M’s will not be satisfied until every last cartoon character is deeply unappealing and totally androgynous. Until the moment you wouldn’t want to have a drink with any one of them. That’s the goal. When you’re totally turned off, we’ve achieved equity… pic.twitter.com/rz7VtVCHWu

Why didn’t they cut the feed off?

Not what you want to see

Paris Hilton is trying to pivot from a party-loving it-girl to a “timeless icon” that brands can see as a family-friendly, innovative leader https://t.co/H89itDCRIY

“From his heart to your souls … don’t ever stop rocking!”

Waited long, you have. It’s time to take a closer look at gameplay for LEGO Star Wars: The Skywalker Saga! The galaxy is yours on April 5th! #LEGOStarWarsGame pic.twitter.com/WrUJrdLlBm

The @WWEUsos will be barred from ringside during the #UniversalTitle Match at #RoyalRumble! #SmackDown

Jon Moxley is back

Beer showers??? Count me in!

If MLB stays locked out this year I am 100% taking some trips to college baseball games and vlogging it. Ole Miss beer shower looks wild 😂 pic.twitter.com/GDDsMzFSTB