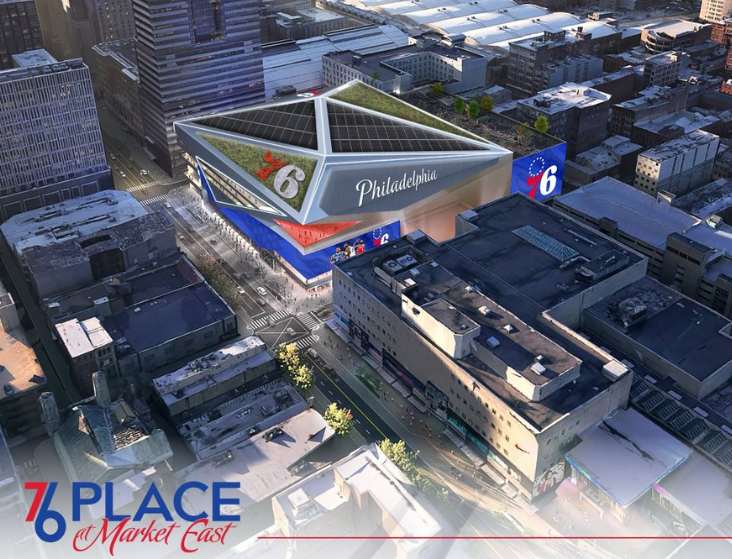 Get excited, folks (or don’t), but today the 76ers have announced a site that they’re proposing a new arena for in the Fashion District of Philadelphia called 76 Place. 76ers Managing Partner Josh Harris stated:

“The Philadelphia 76ers are a storied Philadelphia institution with a proven track record of investing in their community. That’s why we’re committed to building a world-class home in the heart of the City and creating a privately-funded arena that strengthens ties within the local community through investments that prioritize equity, inclusivity and accessibility.”

You can see the full release here:

Today we announced the site where we propose building our future home, @76Place at Market East.

Philadelphia, Pa., JULY 21, 2022 – Josh Harris and David Blitzer, Managing Partners of the Philadelphia 76ers, announced today the creation of a new development company, 76 Devcorp, responsible for developing the future home of the Philadelphia 76ers. Led by Philadelphia business leader David Adelman, in partnership with Harris Blitzer Sports Entertainment (HBSE), the Development Corporation is pursuing a privately-funded, purpose-built sports and entertainment arena, 76 Place, that will be located on a portion of the current site of Fashion District Philadelphia and serve as an anchor to Center City.

“The Philadelphia 76ers are a storied Philadelphia institution with a proven track record of investing in their community. That’s why we’re committed to building a world-class home in the heart of the City and creating a privately-funded arena that strengthens ties within the local community through investments that prioritize equity, inclusivity and accessibility,” said Josh Harris, 76ers Managing Partner. “David Adelman shares our vision for ensuring that the new arena is an anchoring force in the local community, creating well-paying jobs and economic opportunities for those who need them most.”

Adelman, the CEO of Campus Apartments, Co-Founder of FS Investments and Founder of Darco Capital, was appointed Chairman of the new development company with a mandate to locate, design and develop a destination that serves as a world-class arena facility, but also a lever for the City of Philadelphia’s economic growth by promoting transformative community development, local job creation and equitable wealth-building opportunities. He was selected to lead the development project for his globally acclaimed accomplishments in real estate development in Philadelphia and nationwide, as well as his dedication to local philanthropy and investments in Philadelphia startups.

“The Philadelphia 76ers’ extensive evaluation of potential sites for an arena over the past two years culminates today with plans to pursue the Fashion District Philadelphia site as the proposed new home of the team,” said Adelman. “The chosen location is a key step in the process of developing a destination that provides Center City and surrounding communities with an economic engine generating activity through 76ers and youth games, concerts, events and more.”

76 Devcorp carefully evaluated numerous potential sites before determining Fashion District Philadelphia as its preferred location. The site was selected primarily due to it being the most transit-rich location in all of Philadelphia, the ability to redevelop an existing commercial space, and the opportunity to play a role in the continued revitalization of Center City.

The Development Corporation will partner closely with Macerich, the managing partner of the owning entities and operator of Fashion District Philadelphia, to realize the full potential of the site. “At Macerich, we are constantly enhancing our properties to bring greater value to our shareholders, retailers and communities,” said Tom O’Hern, CEO of Macerich. “The decision to repurpose part of Fashion District Philadelphia to include the new 76ers arena is a natural evolution of the site and a unique and once in a lifetime opportunity for our company. We are committed to working collaboratively with 76 Devcorp to bring to life the vision of this iconic development that will ensure Philadelphia’s vibrancy for generations to come.”

A robust community engagement process is planned to ensure community interests help drive the plans for the proposed development and that it fits within the context of surrounding communities, while also being responsive to the needs of adjacent neighborhoods. In the spirit of this project being mutually beneficial for the Sixers and the broader Philadelphia community, 76 Devcorp anticipates partnering with surrounding community development groups to create a Community Benefits Agreement that ensures the forthcoming arena has a positive impact from the start of construction to opening and beyond.

“Our pledge is to advance equitable, community-driven revitalization through this project and to ensure the arena is a win for fans, Philadelphia and the surrounding communities,” said David Gould, 76ers Chief Diversity and Impact Officer. “We look forward to listening to and working with the local community, including local organizations, businesses and residents, especially in Chinatown and Washington Square West, to develop a Community Benefits Agreement that results in long-term positive impact.”

Led by HBSE’s $20 million commitment to address disparities created by systemic racism, the Development Corporation is committed to investing in under-resourced communities to advance equitable, community-driven revitalization. A major tenet of the project will be equitable development, bringing community members to the table via new jobs and co-development roles. 76 Devcorp will collaborate with Mosaic Development Partners, a Black-owned, Philadelphia-based real estate development company with experience in affordable housing and inclusive communities. In January, Josh Harris invested $10 million into Mosaic Development Partners to support their innovative work to expand equitable development across Philadelphia communities.

The new, privately-funded arena is anticipated to cost approximately $1.3 billion. The arena will provide $1.9 billion in overall economic output during construction and $400 million annually upon opening to support Philadelphia’s long-term economic growth and sustainability.

“We’re excited for the opportunity to build the future home of the 76ers in Center City,” said David Blitzer, 76ers Co-Managing Partner. “I look forward to working with David Adelman and his team to develop and build an impactful arena for our fans, our players and the City of Philadelphia.”

The development will be completed in time for the 2031-2032 NBA season. Ground-breaking for the proposed project is not expected for several years. The general public and fans can stay up to date on the progress of the development project by visiting 76Place.com.

“Quite simply put, there is no better place to build an arena in Philadelphia than in Center City, with its robust public transit infrastructure and existing dynamic businesses eager to serve fans and visitors alike. 76 Devcorp is inspired by many successful sports and entertainment arenas built in dense urban centers that promote integration with the surrounding communities. We’re dedicated to making sure this development is a win for our fans and Philadelphia at large,” said Adelman.

South Philadelphia has been the staple for the top pro teams in the City. It would definitely be weird seeing a new arena downtown, but it certainly would help revitalize that part of the city. Of course, there is a ton of work to do to ensure adequate infrastructure in and around the area before they even break ground.

How are you feeling about this potential move?