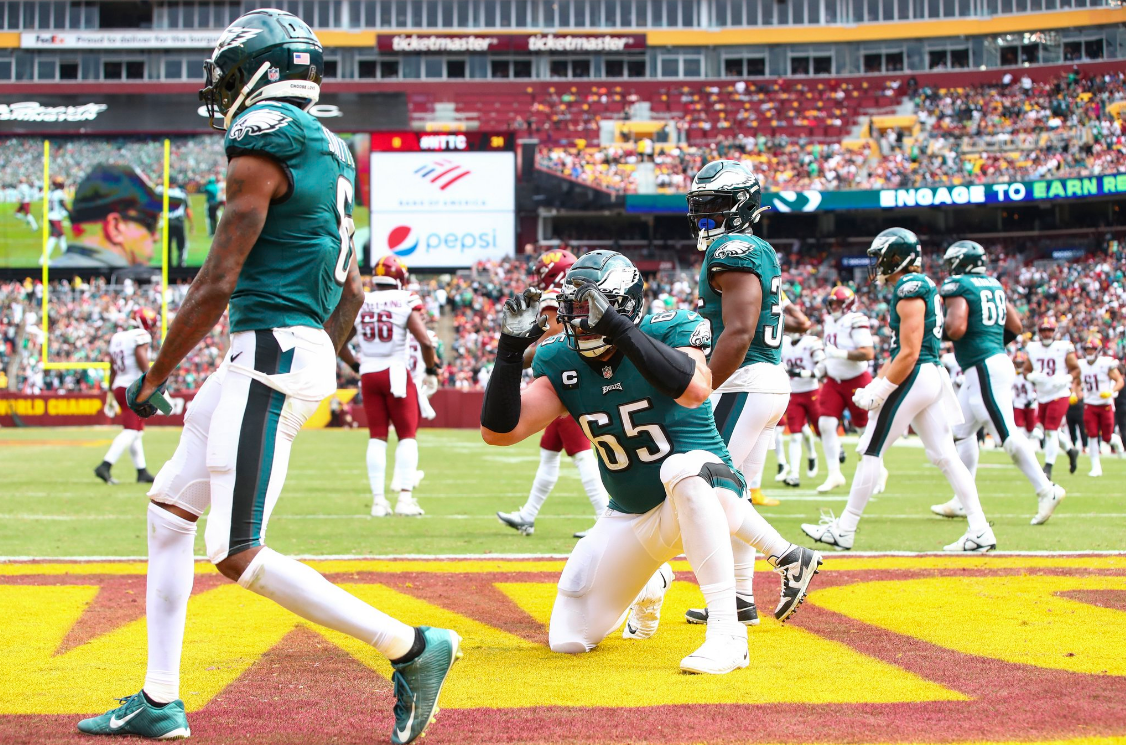 We’re back with an all new Brew. The Eagles moved to 3-0 on the season after a dominant win over the Commanders. Ben Simmons gave his thoughts on Philadelphia. Is CM Punk on his way out of AEW? Florida is bracing themselves for a potential Hurricane. We have a lot to get to, so lets do this! It’s Brew time.

Eagles get the W over the Commanders

The Birds D came to play…

The Philadelphia Eagles relied on the NFL’s “best defensive line” to move to 3-0. @foxphlgambler #FlyEaglesFly https://t.co/4BKchwnTgz

Carson Wentz says when a QB is sacked 9 times, that is not on the OLine https://t.co/FxeV6lImJc

The Philly love is real for and from AJ Brown

Nah Philly is different. Philly be showing so much love . Now let’s work on me being an extra lol 🥲💚 https://t.co/Y4ob8ivSCB

Dougie P has business booming for the Jaguars

One of the most iconic photos in NFL history pic.twitter.com/fi8L3QSP55

Ben Simmons on relationship with Philly…

Here’s @BenSimmons25 on his relationship with the city of Philadelphia.

And the play that will never be forgotten…

Had to ask about this play https://t.co/uq3j7Sd8Sx

Iggy to run it back with the Warriors

Ime Udoka suspended for the season

Some members of the Celtics organization first became aware in July of the intimate relationship between Ime Udoka and a female employee, per sources.

Why, two months later, the Celtics levied Udoka with a one-season suspension — at @TheAthletic: https://t.co/MIoUU1TNK4

Ken Rosenthal admits that he was wrong about the Phillies

Jeff Skversky is no longer at Channel 6

My time at Channel 6 has come to an end after 13 years, as you’ve probably noticed by now.

It was always my dream to be a sportscaster in my hometown of Philadelphia & cover the teams I grew up rooting for.

While it’s hard to say goodbye, happy to share my next career move soon pic.twitter.com/IjsyOVfaZK

The White House calls out the bullsh#t

Senator Cruz voted against this. https://t.co/mht1OgtvwL

Alex Jones is a waste of semen

A wild scene at the end of the Alex Jones trial today when Alex turned into Col. Jessup, talking about liberals loving to kill Iraqis, then: “I legitimately thought (Sandy Hook) might have been staged, and I stand by that and don’t apologize for it.” pic.twitter.com/nPpDKd01dQ

The Onion does it again

‘I’m Mr. Q The Pedophile Or Whatever,’ Trump Says In Half-Assed Attempt To Pander To QAnon https://t.co/PIc4HfF2dQ pic.twitter.com/6hnvgMN58P

This is how it works

Nick Fuentes is a piece a trash

Nick Fuentes says the only hope for America is for there to be a “white uprising” that then disbands Congress and installs Trump as a dictator: “Elect Trump one more time and then stop having elections.” pic.twitter.com/heOxD9J7R8

Rainbow Fetanyl has everyone worried…

A new wave of concern has spread across the United States over multi-colored “rainbow fentanyl” pillshttps://t.co/ATT45ezIEY

Tropical Storm Ian is expected to strengthen into a hurricane late Sunday or early Monday and eventually become a major hurricane before reaching western Cuba and later Florida. Forecasters are unsure exactly where Ian could make landfall in the state. https://t.co/t7adZfgiVB

This could be a bad one…

Everyone from New Orleans to Miami needs to be taking this one seriously. pic.twitter.com/BaRoxdr9aX

Help is on the way for Millennials

Instagram is working on a way to let users block unsolicited nude photos that they’re sent via direct messages — using a “nudity protection” filter to screen out and hide such pics.https://t.co/Rv0pGK9iIH

Rihanna to perform at halftime of this year’s Super Bowl

The statement from Roc Nation

Camila Mendes is looking hotter than ever!

Paul wouldn’t want any of this…

CM Punk not coming back to AEW???

CM Punk is reportedly not expected to return to AEW following the controversy surrounding the post-All Out media scrum. Punk is currently suspended from the company but it is expected that there will be “some sort of buyout of his contract.”

Read more down below.👇 pic.twitter.com/V4OaEh06qW

Saraya is All Elite

Fucking WOW! Absolutely blown away by the pop in the stadium and the reception outside of it. Been a long journey. Couldn’t be happier to be in @AEW thank you to everyone! 🥹🥹 and thank you to my babe @RonnieRadke for letting me use his song Zombified! LFG!! ❤️❤️ pic.twitter.com/9czsEWUcot

New record: Most wishes granted through the Make-A-Wish Foundation – 650 by @JohnCena

The @WWE superstar turned actor has over double the amount of wishes granted than anybody else!https://t.co/M2DkCj0IYe

Oh Juanita… you drive me wild!!!