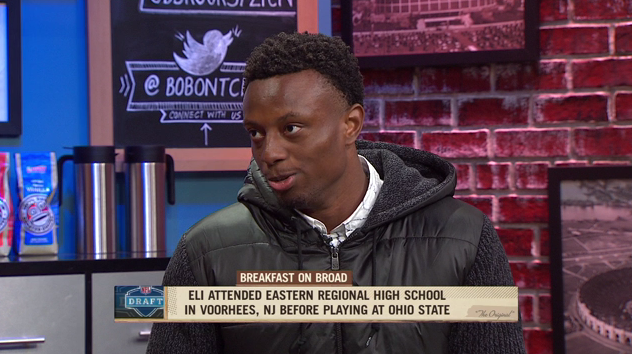 Our friends at Breakfast on Broad brought the goods the last two days. First, Flyers fan Anne Duggan, who threw her bra on the ice Monday night to celebrate Brayden Schenn’s hat trick, was on for a pretty raunchy interview yesterday. Today, Eastern Regional alum out of Voorhees, Eli Apple, was on the show talking about pretty much everything he’s gone through to make it to the NFL draft this year, including taking supplements for an iron deficiency that left him questioning whether he’d be able to play in the NFL or not.

Apple played out of Ohio State University for two years before declaring for the draft this offseason as one of the premiere cornerbacks in the first round of the draft. The Eagles have been rumored to move Eric Rowe back to safety and draft a cornerback, and it wouldn’t be a surprise if they went after Apple in the first round, although they probably should focus on the offensive line.

One comment towards the end of his interview on Breakfast on Broad this morning raised some eyebrows when Jillian Mele asked Apple what some of the weirdest questions he was asked at the combine.

I’ve been asked a lot of weird questions. I don’t know if I could say them on TV. I think, uh, the Falcons’ coach – one of the coaches was like, ‘So do you like men?’ and it was like the first thing he asked me. It was weird and I was just like, you know, ‘No.’ I’m just like … ‘Well if you’re gonna come to Atlanta, you just gotta know that, you know, sometimes that’s how it is out here. You gotta get used to it.’ I guess he was joking, but they just ask most of these questions to see how you’re gonna react, if you’re paying attention, I guess. That was like the first thing off the bat.”

Whether it was a joke or not, that’s still something that might be a little too personal to ask a guy in his early 20’s trying to make it to the NFL. If coaches are using it to see how prospects would react to such a question, that’s not really indicative of how the player will help the team on the field.

Video of the entire interview below. Apple talking about the Falcons coach asking him if he liked men begins around the 5:20 mark.

I am really disappointed in the question that was asked by one of our coaches. I have spoken to the coach that interviewed Eli Apple and explained to him how inappropriate and unprofessional this was. I have reiterated this to the entire coaching staff and I want to apologize to Eli for this even coming up. This is not what the Atlanta Falcons are about and it is not how we are going to conduct ourselves.”