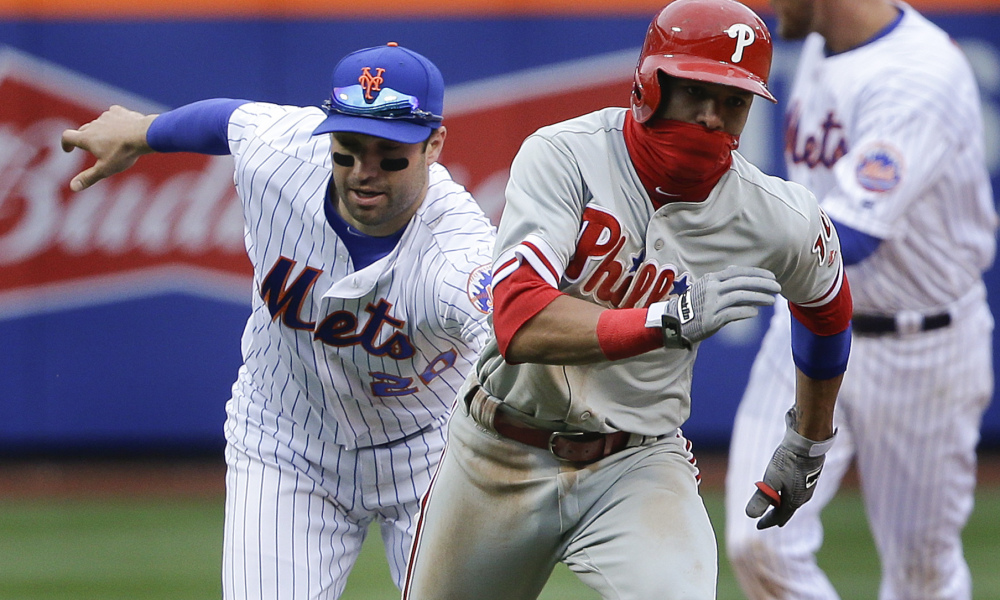 The Phillies are only four games into the new season and they’re already the laughing stock of the league. They’re off to a fantastic 0-4 start. Their bullpen couldn’t hold a lead if their lives depended on it and the offense doesn’t seem to know the basic rules of baseball.

You know, I thought the biggest issue this season would be addressed – fundamentals. Hell, the skipper is fining his players for fundamental errors. Whoever that money is going to is going to be filthy rich by October.

In the Phillies latest loss on Friday against the Mets, Cesar Hernandez gave an assist to the Mets and got caught in an infield fly rule double play. With Hernandez on first and Freddy Galvis on second and one out,  Odubel Herrera hit an infield fly. Mets third baseman David Wright attempted to make the catch but lost the ball, and Hernandez took off for second even though he absolutely didn’t have to, and even though Galvis was already standing on second. Check out this foolishness.

Pete Mackanin talked about the brainfart by Hernandez:

“In high school, you should know that. It was just a brain cramp, I guess, that Cesar had. Freddy didn’t move. He knew. It wasn’t even — you didn’t have to think about it. It was in the infield, definitely in fair territory, and, yeah.”

Perfect response from Mackanin and that says it all about the Phillies. Don’t get it twisted, though. That play didn’t cost the Phillies the game. They were getting dominated even without that play. As Deadspin correctly noted, that play was “Things Only The Phillies And Little Leaguers Do.”