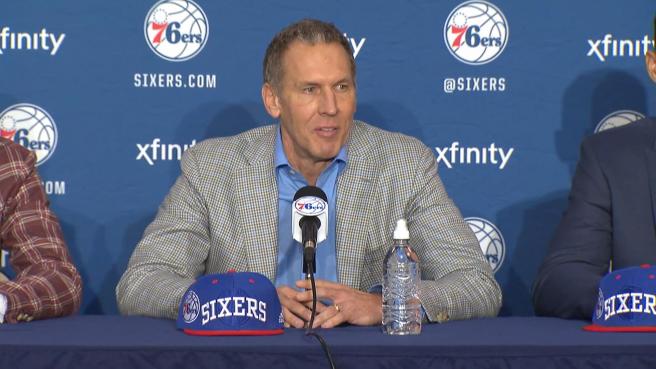 What’s really changed in the 10 months since Bryan Colangelo became the president of basketball operations for the Sixers? Sam Hinkie resigned from his post last April, with some Sixers employees citing his lack of public access as being a reason the Sixers were looking to pair Bryan Colangelo with him. After all, the Colangelos are highly respected in the NBA family, so being able to have at least one of them with the team [Jerry was likely just going to leave when Bryan came in, anyway] would quell some of those harsh feelings that were reported by other NBA franchises towards the Sixers.

However, here we are in February 2017. Ten months later. And what really has changed? Perhaps the expectations have – Joel Embiid is a bonafide superstar in this league. Yes, a Sam Hinkie pick at that. He’s looking towards the playoffs despite sitting 14 of the last 15 games. The Sixers are playing way better as a whole in each game. Maybe Brett Brown’s a good coach? However, the covering up of Embiid’s knee injury that was revealed as a torn meniscus over the weekend is the latest in what’s become a line of questionable acts by the organization. Were they trying to sell tickets during that time with nobody knowing exactly when Embiid would take the court again? Without a doubt. But there’s also the way Colangelo came off, especially in his interview on WIP, where he was standoff-ish and combative. And, according to some Sixers employees, that’s no different than Hinkie was portrayed by a lot of the media during his time in Philly.

I’ll never forget how one source explained it after Hinkie’s ouster: “It’s kind of like asking your kids to clean their room. You’re not really asking.”

That, more than anything else, is why, according to team sources, Hinkie was out and Bryan Colangelo was in. Now, some of those same Sixers employees fear Colangelo is making similar mistakes. One member of the organization used the word “stunning” to describe the aforementioned botched sports radio interview and allowed that Colangelo has been as hard to pin down as Hinkie. We should note that over the course of the past month, The Ringer repeatedly asked to interview Colangelo. Those requests were alternately denied or ignored. “Definitely one of the reasons they canned Hinkie,” a league executive said. “Same stuff.”

Hinkie could not be reached for comment. That might sound like standard operating procedure for him, but the largely unknown truth about Hinkie is that, despite the conventional understanding of the man, he was frequently available to the media. You could get him on the phone, and if you saw him before a game, it wasn’t uncommon to sit and talk with him. He just didn’t usually do it on the record. It was mostly used for deep background or to point you in the right direction. And he almost never did radio or TV appearances — which did not go over well in a town still dominated by older radio and TV personalities with atavistic ideas about “access” to general managers.

Given all that, and given Hinkie’s unrepentant and open embrace of tanking, it’s not surprising that he got pushed out — but it is surprising to watch Colangelo ape parts of the approach that made Hinkie haters so mad in the first place.

Does that surprise anyone? I mean, we were sold that Colangelo would be completely different than Hinkie. A 180-degree turn, even. But after his two interviews on local sports talk radio last week, one has to wonder: What is really different about this team? And I have yet to mention the avenue the organization has taken regarding Jahlil Okafor. How the hell can he play a game for the Sixers now? They told him to go home and wait for a trade to happen. Now he’s back with the team in Boston for the last game before the All-Star break tonight. What good does that do? Does that mean they won’t trade him before the deadline next Thursday?

Colangelo was brought in to make Hinkie’s Sixers less confusing. But during his time so far, he’s made them even more confusing.