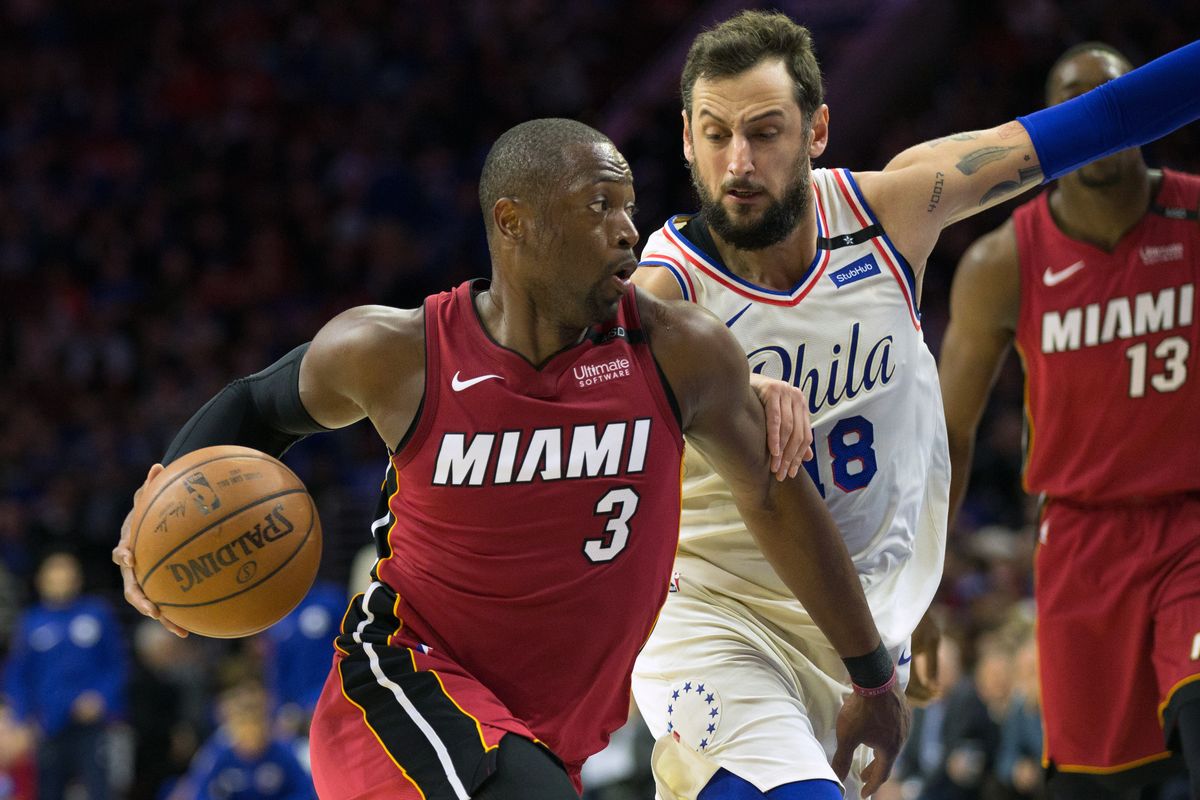 Dwyane Wade lulled Ben Simmons to sleep before rising over him and knocking down one final dagger with 45.9 seconds to play.

Father time hasn’t caught up to the 36-year-old just yet.

The Philadelphia 76ers fought back valiantly from a 16-point, fourth-quarter deficit, but Wade played the role of closer like he’s done so many times before in his illustrious NBA career. The 17-game winning streak is over and this first-round series between the Sixers and Miami Heat is now tied as it shifts toward South Beach.

Which begs the question, will Joel Embiid be making his much-anticipated return on Thursday night?

Wade scored 28 points on 11-of-16 shooting and the Heat held off the Sixers 113-103 in Game 2 to snap their 17-game winning streak at Wells Fargo Center on Monday night.

Wade wasn’t the only reason why Philadelphia tasted defeat for the first time since March 13th when it lost at home to the Indiana Pacers. The Sixers were just 7-of-36 from behind the arc (19.4 percent) after knocking down a playoff franchise-record 18 (18-of-28) from long distance in Game 1. They struggled as the Heat slowed down the pace and turned it into much more of a halfcourt affair. Miami also shot 48.8 percent (40-of-82) and Philly’s lack of stops on the defensive side of the floor limited its opportunities to push the tempo.

By the time the Sixers finally began to get some stops, they were staring at a 16-point hole with 11:04 to play. They used a 21-7 run to claw within 98-96 with 4:29 left, but never got any closer. That’s when Wade checked back into the game, stole the ball from Dario Saric and finished with a dunk at the other end of the floor. Then he recorded an assist on a James Johnson dunk, Goran Dragic knocked down a jumper and suddenly the Heat were back up eight, 104-96, with 2:27 to play.

It’s unclear whether or not Embiid will return for Game 3, but according to his Instagram he’s “f-cking sick and tired of being babied.”

Yea, I think we’ll be seeing him on Thursday night.

This was Embiid getting some shots up before Game 2.

The Heat were a lot more physical on the defensive side of the floor, doing a much better job fighting through screens. They also inserted Rodney McGruder to help out on 3-point snipers J.J. Redick and Marco Belinelli, who combined to go 3-of-15 from three.

Miami outscored the Sixers 34-13 in the second quarter, with Philly not recording a point in the frame until the 8:11 mark. In the meantime, the Heat used a 20-2 burst to turn a 29-20 first quarter deficit into a 40-31 advantage a little past the midway point of the second. Wade poured in 15 points in that pivotal frame and the Heat led 56-42 at halftime.

Philly had eviscerated its competition 514-385 (30.2-22.6) coming out of the locker room in the third period during its 17-game winning streak, but were only able to trim that 14-point gap to 11 heading into the fourth. The Sixers had outscored their opponents by double digits in seven of those games, but it was only a 33-30 advantage in the third quarter of Game 2.