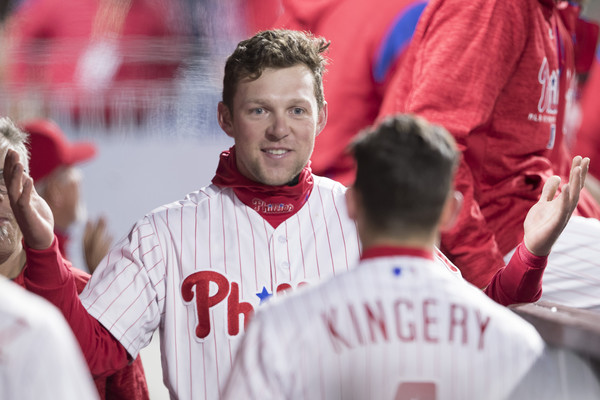 Very little went right in the Phillies’ first five games of the season. Actually, the trips to Atlanta, GA and Flushing, NY were borderline nightmare-ish for a team with heightened expectations.

It all started when Gabe Kapler’s pulled Aaron Nola after 68 pitches on Opening Day. I still stand by this decision, for what it’s worth. If it were previously outlined that Nola would throw about 70 pitches in his first start then this was the right time to pull him. Regardless, the decision ended up back firing as Hoby Milner allowed a full count homerun to Freddie Freeman and the Braves inevitably went on to win the game in the bottom of the ninth inning. The Phillies went on to take one game of the three game series.

Next, the Phillies took a trip up to New York to play the Mets. In the infamous “Facebook” game, a poor defensive alignment in right field allowed Amed Rosario to hit a two run triple to seal the game for the Mets. Much like Milner v. Freeman, this is a case of the statistics failing Kapler.

With a 1-4 record and a fan base ready to can the manager, the Fightin’ Phils returned home for the first time in 2018. The players were greeted with cheers, Kapler was booed when he took the field. Nick Pivetta started the home opener against the Marlins where he threw 5.2 innings of shutout baseball including nine strikeouts. He was pulled after throwing 97 pitches yet the crowd still booed the skipper. The Phillies went on to win the game 5-0. On Saturday night they went on to win 20-1 on a night where the bats came alive. On Sunday Jake Arrieta made his first start of the season. He threw four innings, allowed three runs, three hits, and five strikeouts. Despite only throwing four innings, he was really in a groove after the first inning. The Phillies went on to lose that game. The Phillies went on to sweep the Reds in a memorable series to bring their record to 6-5.

At the end of the day, I think that this past homestand against subpar opponents was just what the doctor ordered for this Phillies team. Over the past six games the pitching has looked superb and the bats came alive. Nick Pivetta looked really good in his last two outings, Aaron Nola is looking like the ace we expect him to be, and even Vince Velasquez looked good in his game against the Marlins. Maybe the double digit lead gave him some confidence.

The young guys like Rhys Hoskins and Scott Kingery proved their offensive worth to the team. The veterans like Carlos Santana, Cesar Hernandez, Odubel Herrera, and even Maikel Franco proved what they bring to the table offensively. For the first time in what seems like forever, fans are arguing which eight players should be on the field day in and day out.

Guys who made their debut last season worked through some problems as well. JP Crawford hit his first big league homerun and batted in a clutch RBI in consecutive games. Nick Williams spoke his mind early on but apologized for his statement and made the best of his time. He hit the ball well and hit a pinch hit homerun to seal a game against the Reds.

The thing that most stands out to me is that Gabe Kapler has grown as a manager since the first five games of the season. He has shown that he is adaptable and learns from his mistakes or missteps. Take for instance Aaron Nola. Nola was pulled after 68 pitches in his first start. In his last start he dominated the Reds to the tune of six strikeouts, three hits, and one earned run.

These past six games were perfect for the entire organization. From the coaching to the players everyone on this team grew. This is a young team that will surely have more ups and downs over the course of the season, but right now they are riding high after a 5-1 homestand. It’s a long season but this was a great building block.

The Phillies travel to Tampa Bay to take on the Rays starting on Friday at 7:10 P.M.