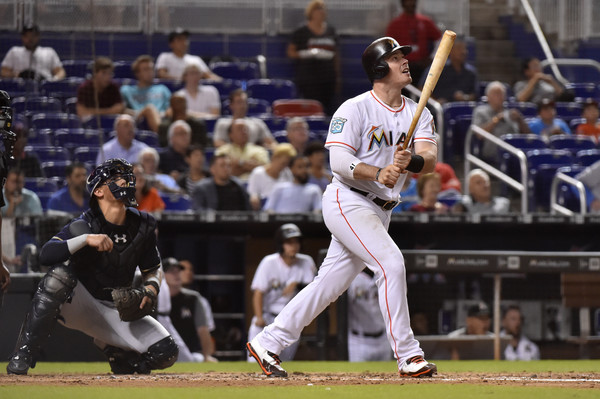 The Phillies traded for Marlins’ first baseman Justin Bour, according to The Athletic’s Ken Rosenthal who broke the news on Twitter this afternoon.

#Phillies acquiring 1B Justin Bour and cash from #Marlins for a minor-league pitcher, sources tell The Athletic.

Bour owed about $900K, the balance of his $3.4M salary. Two years of control after this, so #Phillies might trade or non-tender him. #Marlins could have simply let him go on trade waivers, but included cash in deal to acquire minor-league pitcher. Not simply giving him away.

The Phillies send minor league left-handed pitcher McKenzie Mills to the Marlins for Bour. To make room on the 40-man roster, right-hander Jake Thompson has been designated for assignment.

Bour will come in and give the Phillies another option off the bench. The bench keeps getting deeper and deeper as the Phillies look like a legitimate contender for the NL Crown. Be bold indeed, Matt Klentak.

This move reminds me a lot of when the Phillies acquired Matt Stairs in 2008. Cue “Bour rips one into the night!”

Mills responded after the trade was made official on social media.

I just want to thank the Philadelphia Phillies for giving me the opportunity to continue my baseball career. I’m proud to say, that I’ve been traded to the Miami Marlins! Can’t wait to get started! Go Marlins‼️ #round2