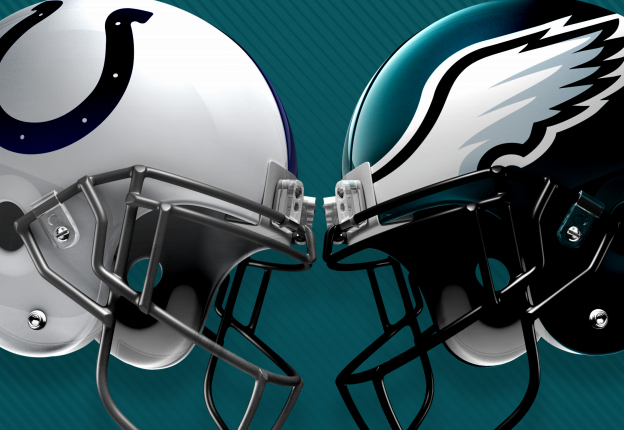 Well, we all crashed and burned last week with our picks. Who would’ve thought Ryan Fitzpatrick would channel Joe Montana in the first two weeks of the season? Certainly nobody.

But alas, the Eagles are 1-1 and in the same boat as they were last season at this point. Only this time, Carson Wentz is back for his first game action since December. It’s like another opening day of the season. The Linc is going to be rocking.

I would like a Men In Black neuralyzer for the performance I saw last week. The offensive struggles were to be expected, but the defense got absolutely shredded. Ryan Fitzpatrick’s post-game and three-chain swag session didn’t help either. With the beginning of the year always leading towards inconsistency, I’m going to ride with the mainstay of this team under Doug Pederson: we are a juggernaut at home. The Colts certainly don’t have the offensive firepower that Tampa Bay has and, for some reason, finger-waving Mills shows up at The Linc. I predict Carson’s return to be a victorious one.

I want to start my prediction by wishing the best of luck to Frank Reich with the Colts. After this week, that is. I don’t wanna put a label like “must-win” on a Week 3 game but it wouldn’t be great to have back-to-back bad losses. That said, this is a super winnable game for the Birds. The defense balls out at home and Brandon Graham is predicting a good day against Colts tackle Joe Haeg. The offense should be rejuvenated now that Carson Wentz is back, this is a recipe of success for the Eagles. I’ll take the Birds.

The Birds getting seven points vs. anyone right now seems extremely high. Yes they are playing at home, but their 2 RB’s 3 WR’s, and T, are all listed on the injury report today and might not suit up. The return of Wentz can certainly help, but who is he throwing it to? With all these injuries and players not yet ready to play, it’s just win, baby.

We all know the narrative. We all expect the same result. Will it happen? Carson Wentz had to sit on the sideline and watch his team win a Super Bowl without him. Now he’s back and to think he will be anything less than determined to win would be unjustified. The Eagles have not looked in tune on the offensive side of the ball since training camp started, but change is on the horizon. The Colts come in to The Linc, but have no idea what they are about to face. A Super Bowl atmosphere, an MVP QB and the best fans in the NFL.

Like Tampa Bay last week, Indianapolis doesn’t possess a potent secondary, so it’s a good week to have bad receivers. It’s also good to have Carson Wentz back to potentially make those bad receivers look good. I say he throws for three scores and the Eagles win.

Well, after a tough loss in Tampa, the team probably spent no time even thinking twice about it this week with the return of the chosen one, Jordan Matthews! Hah… I kid, obviously its all about Carson Wentz this week.

The Colts are a tough team and Frank Recih who was the OC for the Eagles last season is now the head coach for Indy and that means whatever weaknesses he knows of, their going to exploit. I expect another tough game but Wentz will work some late 4ht quarter magic to get the Birds into field goal range. Elliott for the win as the Eagles improve to 2-1 with a 27-25 win.

It’s become apparent just how good the Eagles defense is at home vs. just about any team. It doesn’t matter if Andrew Luck was in his prime or just coming off an injury, I would firmly believe the defense shows up on Sunday. Away from home is an entirely different story, and one that must be fixed as soon as possible. But this week, we don’t have to worry about that.

Don’t think Carson Wentz being back won’t juice the defense. They’re playing for him, too. This could turn into a laugher because the Colts seriously don’t impress me. But again, I thought that about the Bucs last week, too. 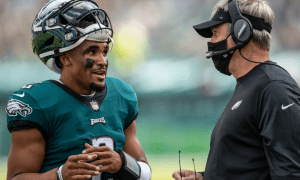 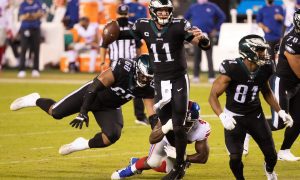