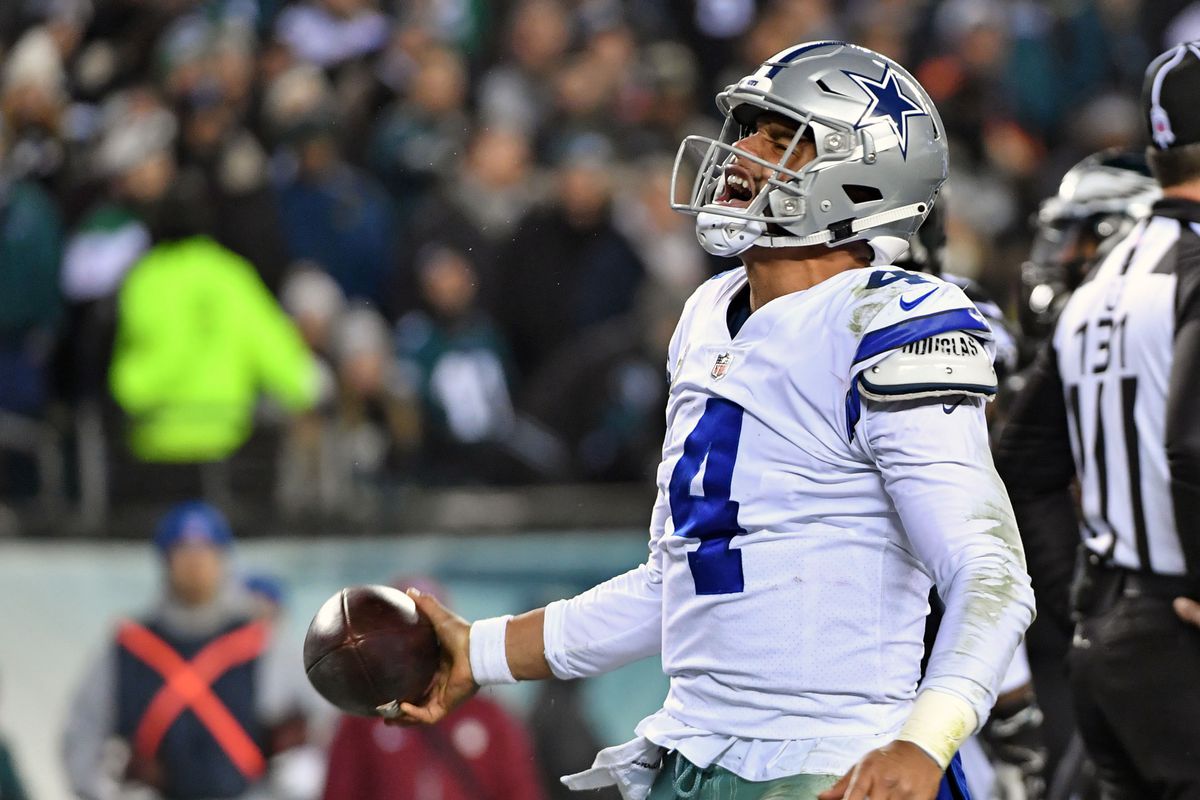 Two weeks to tinker with the offense.

Two weeks to tinker with the defense.

Two weeks to motivate the team.

Two weeks to make changes and not a damn thing changed.

“All of us need to look in the mirror,” Philadelphia Eagles head coach Doug Pederson said after the 27-20 loss to the Dallas Cowboys on Sunday night. They needed to look themselves in the mirror after the overtime debacle in Tennessee, following the Carolina chokejob a few weeks ago and you’re telling me they never even looked into the mirror these last two weeks.

This was a disgusting loss.

“Are we doing enough? Are we giving enough? You have to strain yourself to make plays. We didn’t do it. Each person, each coach, each player in the locker room has to look at yourself and decide every day to give your best.”

Ezekiel Elliott ran for 151 yards and the Eagles fell to 4-5 after the 27-20 defeat to the Cowboys on Sunday night at Lincoln Financial Field. Philadelphia had no answer for Dallas’ offense in the fourth quarter.

Is it time to get concerned?

“You scratch your head and try to put your finger on some things. But at the same time, I understand it’s still — our division is right in front of us again. We have seven games remaining, and it’s a prideful group. That’s the thing. I trust those players in there. They’ll get it figured out. Just comes down to, like I said earlier, each man. We can’t worry about two, three, four games from now. You can’t worry about the post season or any of that. You have to worry about the next game and focus on the next game and do everything you can to try to win that game.”

The same old mistakes kept occurring, including a pivotal point before halftime when the Cowboys were faced with a 3rd-and-15. Instead of forcing a punt and getting the ball back with the possibility of getting some more points before the break, Michael Gallup moved the chains on a wide receiver screen. Rasul Douglas went a bit too far inside, which allowed Gallup to get the necessary yardage. Two nice throws by Dak Prescott followed to Cole Beasley and Allen Hurns for 21 and 17 yards, respectively, before he snuck it in for a 13-3 Dallas lead.

It's been a consistent theme all season on 3rd and 4th-and-long. IT'S UNACCEPTABLE!!! Eagles put themselves in position to get ball back. Instead Dak makes two big throws and sneaks in for TD. It's 13-3 and Dallas gets ball to start 2nd half. It's nauseating pic.twitter.com/Rq6lfmEyCr

By the time the fourth quarter came around, the Eagles’ defense had no answer for Zeke as they allowed a pair of consecutive 75-yard touchdown drives. Once Ronald Darby exited with a knee injury, Dallas feasted on the Eagles’ depleted secondary with Sidney Jones and Jalen Mills already out.

Pederson stated that the team didn’t do a good job of tackling Elliott.

“Zeke [Cowboys RB Ezekiel Elliott] is a big back, powerful back. Probably some of that a little bit. But I thought, overall, we didn’t tackle great. That’s one of the areas we got to get better at, too. Tackling in space, tackling in the box, and just making sure that we get the guys on the ground. There were too many yards after contact and things like that. So those are areas we have to concentrate on.”

Rasul Douglas got the start and he certainly didn’t look better than Mills. He was responsible for the 3rd-and-15, missed several other tackles and got burned bad on this key 3rd-and-8.

Zeke walked in from a yard out to put Dallas back in front.

Carson Wentz, who was 32-of-44 for 360 yards with two touchdowns and an interception, tossed both of his scores to Zach Ertz as the Eagles were able to answer Dallas’ previous scoring drives. But they were unable to go in for one more tying march.

Carson Wentz hits a wide-open Zach Ertz for the TD and this game is tied pic.twitter.com/wsjTqQe1pn

Speaking of those two possession, Wentz floated this 51-yard beauty right into the lap of Nelson Agholor.

Carson Wentz with a dime to Nelson Agholor for 51 yards, he dropped it right into his lap pic.twitter.com/PxZlEFb1SZ

But when the Birds were faced with a 3rd-and-2, Leighton Vander Esch made a great play behind the line of scrimmage for a loss of five and Ertz was unable to get to the sticks on his 4th-and-7 route.

Great play by LVE on 3rd down, Ertz short of sticks on 4th down pic.twitter.com/bAE5FckV2a

Pederson commented on the 3rd-and-2.

“We anticipated pressure and we got it. The throw right there was to [RB] Corey [Clement], and without watching the tape because it was on the far sideline, can’t really tell you exactly what happened. But anticipated the pressure, got it, tried to get the ball out quick, and tried to execute the play. We just failed to do that.”

And what about Ertz unable to get to the first down marker?

“It’s a route that’s going to get you the fourth down or any down really. I give credit to Dallas and to [Cowboys S Jeff] Heath. He came up and it was a contested catch. Zach did a great — ball was a little bit high, but he came down with the ball and we were just about a half yard short. So just a great play by them, and it was a play that I would call again. You’re putting it in [QB] Carson’s [Wentz] hands, you’re putting it in Zach’s hands and that’s what you want.”

It doesn’t get any easier next week with a date in New Orleans looming.