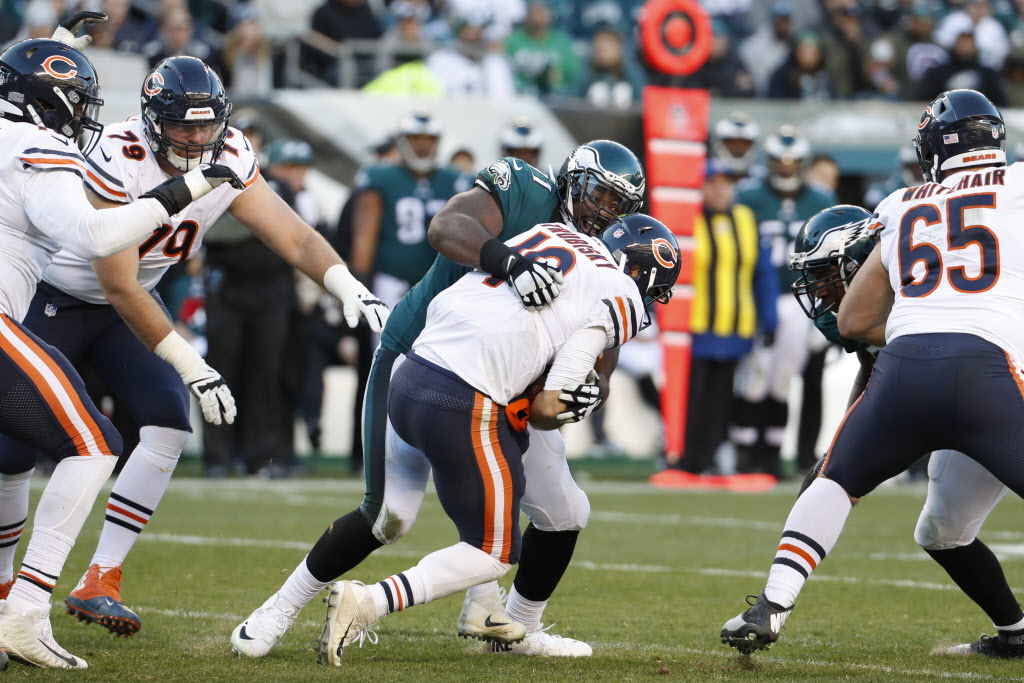 The Philadelphia Eagles are in and now they’re going to go play the team that helped get them in.

The sixth-seeded Birds (9-7) head to the Windy City to take on the third-seeded Chicago Bears (12-4) late Sunday afternoon at Soldier Field.

Can the underdogs do it again?

Bruised ribs and all, Nick Foles is good to go. Doug Pederson provided an update on Foles Friday.

“Each day it gets better. He’s doing everything he can, with treatment and rehab protocols we have him on and what he wants to do.

Yeah, he’s feeling good. He threw yesterday. Did a nice job and we just have to keep — see where he’s at again today, but each day he’s getting better.”

The Bears’ defense is ferocious, but statistically not as stout as the one the Eagles saw last year in the NFC Championship Game when they played the Minnesota Vikings. The Vikings allowed 15.8 points per game as opposed to the 17.7 Chicago surrendered this year. We all remember what happened in that game.

Circumstances are different, the Eagles are now on the road, but they won’t be intimidated. To move the ball against the Bears, Foles will have to get the ball out lightning-quick and be efficient. He’s been doing just that the last three weeks, averaging 2.23 seconds per pass. The Bears are 3-2 this year against teams who get rid of the ball in less than 2.5 seconds.

Nick Foles misses one play after the big hit by Jadeveon Clowney on the Alshon Jeffery reception, but leads the Eagles down the field for the game-winning field goal. Eagles win it 32-30! pic.twitter.com/WM3NszqaWc

Being efficient and maintaining possession also means Foles will have to convert on third down a ton, something he’s done at a high frequency. Since the start of last year’s postseason, Foles is 72-of-90 for 874 yards with nine touchdowns, just one interception and a quarterback rating of 135.8.

Can the Eagles’ offensive line keep Foles upright? Unlike the Rams when they double-teamed Aaron Donald a ton and Houston when they had the luxury of helping on J.J. Watt and Jadeveon Clowney, Sunday will be able winning individual matchups because the Bears are deep. They’ve got Khalil Mack, Leonard Floyd, Akiem Hicks, Eddie Goldman and company. Chicago is a lot like Philly’s defense last year, put pressure on the quarterback and create turnovers. The Bears led the NFL in interceptions (27), defensive touchdowns (6) and were third with 50 sacks.

Pederson explained why the Bears are so good at taking the ball away.

They have a lot of eyes on the quarterback and a lot of eyes on the ball and they are opportunistic that way and they do a great job of stripping and sort of punching the ball out from running backs, and it’s for them, it’s turning into points. I believe it’s 107 something points total I think in the NFL, first in the NFL. So a lot of respect for that, and I know that they will try to continue that. It’s our job to make sure that ball security is a premium obviously in a game like this.”

Where the Eagles could find some success is with Darren Sproles coming out of the backfield and working the slot with Golden Tate and Nelson Agholor. When the Patriots put up 38 points against Chicago in a Week 7 win, James White caught eight passes for 57 yards and two touchdowns. They also worked a lot of underneath routes with Chris Hogan and Julian Edelman. Bryce Callahan was Chicago’s nickel cornerback before he was lost for the season with a broken foot in early December. The Eagles have used more bunches and stacks in the slot since Tate’s arrival and this could be one of the few areas of weakness that the coaching staff might be able to exploit.

“I love the city of Philadelphia. Chicago is just where I was for work.”

Those comments from Jeffery made headlines this week. Jeffery has 16 receptions for 301 yards and a touchdown the last three weeks and will be going against Kyle Fuller, who is three inches shorter. This is also an area to watch because Foles has done a great job of putting the ball up for Jeffery to go get on 50-50 jump balls, letting him get outstretched so he can use his strong hands at the catch point to snatch the ball out of the air.

“He’s really kind of come on the last month of the season and when balls go his way, he’s aggressive to the ball, and he understands that. Of course, he’s excited about going back to Chicago and looking forward to that opportunity.”

Zach Ertz, of course, set an NFL record for most receptions by a tight end, but he goes against a defense which ranked third against them, so we’ll see if it’ll be a struggle to find the security blanket of the Eagles’ offense.

The Eagles are back to using the committee. Josh Adams emerged as the lead dog for a few weeks, but then Corey Clement got hurt and Wendell Smallwood re-emerged, and finally Darren Sproles is back in the fold as well.

Darren Sproles beats Zach Cunningham on a wheel route and Nick Foles hits him with a nice touch throw to pick up 21 yards on 3rd-and-1. pic.twitter.com/gSKHRDcfsw

Each has their own strengths. Adams is the in-between-the-tackles runner, Smallwood has been used more on the outside zones and Sproles is the swiss army knife. Balance has a big reason for Philadelphia’s hot play to close the year, but Chicago is extremely stout against the run. Will the Eagles attempt to stay balanced or start throwing the ball around the yard like they did against Houston?

Hicks and Goldman make it virtually impossible for backs to generate yardage up the middle.

Just like the offense, the Eagles’ defense is getting hot at the right time too.

Philadelphia outgained Washington 360-89 and didn’t allow a third down conversion in nine opportunities last Sunday. Fletcher Cox had three sacks and has 6 1/2 of them in his final five games. He led the NFL in pressures the last month of the year. Cox and Michael Bennett unleashed havoc on opposing offensive lines to close 2018.

Fletcher Cox was the NFL leader in total pressures over the final four weeks of the season. pic.twitter.com/TMUBXGzCX0

Deeeeeeeep penetration! Cox against Kyle Long will be a hell of a matchup.

If the defensive line can continue to pressure the quarterback, it’ll be a long day for Mitch Trubisky, but if the quintet of Charles Leno, James Daniels, Cody Whitehair, Long and Bobbie Massie have done a stupendous job of keeping Trubisky clean. The Eagles totaled 13 sacks over their final four games, good for 3.25 per game. For context, Pittsburgh and Kansas City led the NFL with 52 sacks, an average of 3.25 per game.

“This time of year, you’re starting to see that unit kind of gel together. There’s a lot of communication with games and stunts and different things. So, they are getting a feel for one another and what the — if it’s [DE] Chris Long and [DE] Michael Bennett, what their combinations are or [DT] Fletcher [Cox] and [DE] Brandon Graham and all that. That starts to come together obviously this time of year.

But, these guys have played a lot of football and a lot of playoff football. And some of the guys, like Chris Long and Michael who have been in situations like this, just know what it takes. And now Fletcher and BG have experienced it and it just sort of feeds to the group.”

Avonte Maddox and Rasul Douglas have settled things down in the secondary. Douglas had a beautiful interception and another big game against Washington.

Rasul Douglas with the pick! pic.twitter.com/s09mtBUHUL

The cerebral and charismatic 40-year-old Matt Nagy has gotten the most out of former No. 2 overall pick Mitchell Trubisky in his sophomore season after a freshman campaign with John Fox, which saw him throw for over 200 yards just three times in 12 starts.

.@ChicagoBears @Mtrubisky10 could someone please bump this throw to TRUBISKY’s resume reel. The @Vikings came into week 17 with an @NFL leading 50 sacks and left bounced out of the playoffs with 50 sacks. #BaldysBreakdowns pic.twitter.com/dQKQwXOxFl

The 24-year-old UNC product produced a quarterback rating of 120 or higher in four games in 2018, throwing for 3,223 yards, 24 touchdowns and 12 interceptions and a quarterback rating of 95.4. He also added 421 yards and three scores on the ground, averaging 6.19 yards per carry. The Eagles have had trouble with scrambling quarterbacks this season so we’ll see if Trubisky can cause them fits Sunday.

The Eagles’ run defense has been shaky all season long, but they’ve come on lately. Adrian Peterson didn’t register a single yard in four carries against them Sunday.

Nagy has gotten flack from the Bears’ fan base for not running the ball and Jordan Howard enough, but Howard has gotten the ball plenty over the final three games, finding the end zone four times and registering 222 yards. Howard, however, was completely shut down by the Eagles’ defense last year. He gained just six yards on seven carries.

The quick, shifty and diminutive Tarik Cohen will also be a handful, especially on third down coming out of the backfield.

PREDICTION: The Eagles have the recipe to beat the Bears. Foles has to get the ball out of his hands lightning quick and if he does, the Eagles’ offense might be able to put up enough points to win. Experience in the playoffs means something and this is the first taste of playoff football for Nagy and a lot of his players. Cody Parkey misses a game-winner at the horn and the Eagles are going to win!