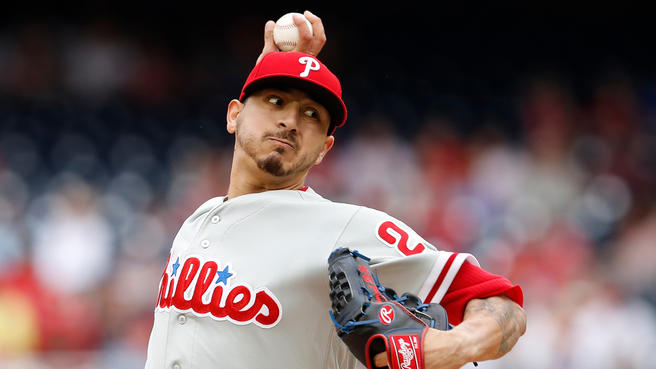 The Phillies find themselves again with a question mark in their rotation. Much like Nick Pivetta in April, the club needs to make a decision on a struggling starter. Vince Velasquez was inefficient again Monday night against the St. Louis Cardinals.

Velasquez could not finish five innings for the second consecutive start, giving up five earned runs and five walks in 3.2 innings in a 6-0 drubbing. He threw 98 pitches, just 59 for strikes. Of his 30.1 innings so far this season, only 11 have been completed in under 15 pitches, with only one such inning in his last two starts. The Phillies have lost three of his last four times out.

After an incredible beginning stretch that saw his ERA at 1.99 after an April 24 start against the New York Mets, fans are beginning to kick themselves for thinking Velasquez has changed.

Last night marked the 14th time in the last 18 starts that Vince Velasquez didn’t pitch into the 6th inning.

If you’re pitching like that, I don’t think it’s wise to think that you know better than anyone which pitch to throw.

Has Vince Velasquez been demoted yet?

Always a strikeout pitcher, Velasquez’s 32 “punchies” (thanks, Bryce!) this season are in line with his 9.7 K/9. His numbers may even indicate that he should be destined for a role in the Phillies bullpen. In 14 career relief appearances, opponents are hitting just .219 against him, compared to .256 as a starter. The numbers get even worse the deeper in games Velasquez pitches. In 23 career innings in the seventh or later, his ERA is 6.65, more than two runs higher than innings one through six. Not to mention that in 96 career major league appearances, 23 is an awfully low number of late innings. He has only pitched past the seventh in 13 of those appearances.

Hitters are crushing Velasquez after they have seen him a few times, as well, to the tune of a .302 batting average the third time through an order.

Does this all sound familiar?

The Phillies made the bold move to option the promising Pivetta to AAA in order to get himself right in the minors. They could recall Pivetta and give Velasquez the same chance with the Lehigh Valley Iron Pigs.

With a power arm and major league caliber arsenal, Velasquez has value on the Phillies; the question remains of what role he would best fill? I took to Twitter to find out:

What would you do with Vince Velasquez if you were in the Phillies shoes?

Reports from NBC Sports Philadelphia, among other outlets, suggest Velasquez has been trying to call his own game. He shook off J.T. Realmuto on multiple occasions Monday, directly leading to two Cardinal home runs.

“It definitely affected the game,” Realmuto said of Velasquez shaking him off. “It’s surprising. I don’t really know, for some reason we couldn’t get on the same page tonight. Obviously, it had an affect on the game. It’s never good when a pitcher and catcher can’t get on the same page. We’ve already discussed it. We talked about it right after the game. So hopefully we fixed it for next time.”

My suggestion is a bit out there, but could benefit both Velasquez and Pivetta [I am still a Pivetta believer].

What if Velasquez and Pivetta combined to be one of the best starting pitchers in the National League, maybe all of baseball? The two pitchers have very similar struggles, but both also possess top-of-the-rotation “stuff.”

Gabe Kapler could use Velasquez as an opener, in the same vein as the Tampa Bay Rays, who currently lead the AL East and have the best winning percentage in the Majors. He could pitch one or two innings, while Pivetta could give the team five out of the pen. That would bridge right to the back end of the bullpen to close games out.

Even crazier, why not use both Velasquez and Pivetta for four innings each and only need the rest of the pen for one inning?! Obviously this is a blueprint and won’t work out perfectly every turn in the rotation. This approach would allow both pitchers to remain in a routine to pitch every fifth day, but also give Kapler the flexibility to use them both out of the pen as long men or in extra innings, if need be. It can’t be any worse than the Phillies current options. You could also flip the order in which you pitch them dependent on match-ups or career splits against certain teams/hitters.

Shaking off Realmuto (or Andrew Knapp) would not be a factor if Velasquez were a reliever. He can simply rear back and let it fly. Maybe less so if the Phillies go the four inning split with Pivetta route, but he would not have to be as worried about pitching deep into games.

He would undoubtedly be claimed on waivers and still has plenty of trade value, although I do not see those as viable options. There are 29 other teams that would be happy to take Velasquez on as a reclamation project. His arm is too powerful and his stuff is too good to just let him walk, but the chances are high that he will do more harm than good if he remains in the same role for the rest of the season.