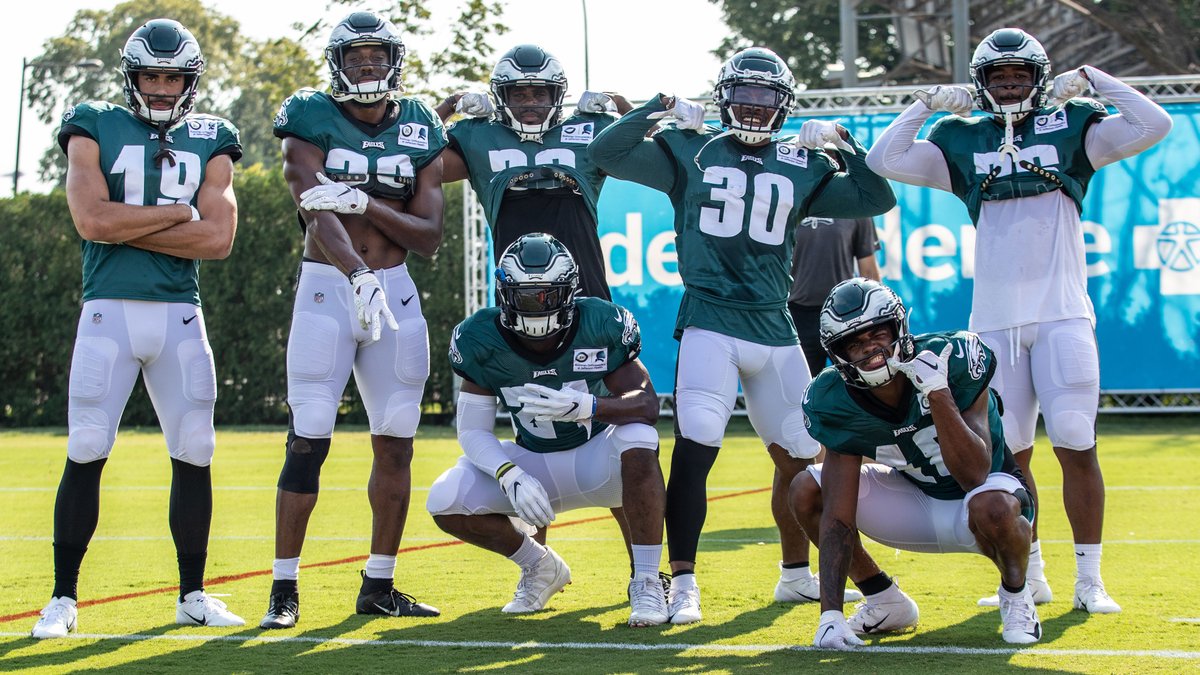 The second week of Eagles training camp did not come without new faces and bruises. The team’s week of practice culminated with a massive open practice at Lincoln Financial Field on Sunday. Here’s a rundown of the latest Eagles news, highlights, commentary, and more.

Check out our Eagles Training Camp highlights from Week 1!

• The Eagles took the field on Sunday at the Linc to a roaring crowd. The playmakers were on full display and the game-like atmosphere ramped up the excitement on Sunday night.

• Coach Pederson talked to the media about the pleasant surprise Jordan Howard has been, how to maximize Aghlor and Goedart at the same time, the positional depth, and more. Carson Wentz alluded to his freedom to audible and check out of plays at the line of scrimmage.

Watch live as Doug Pederson and Carson Wentz meet with the media. https://t.co/fC7INSMT4f 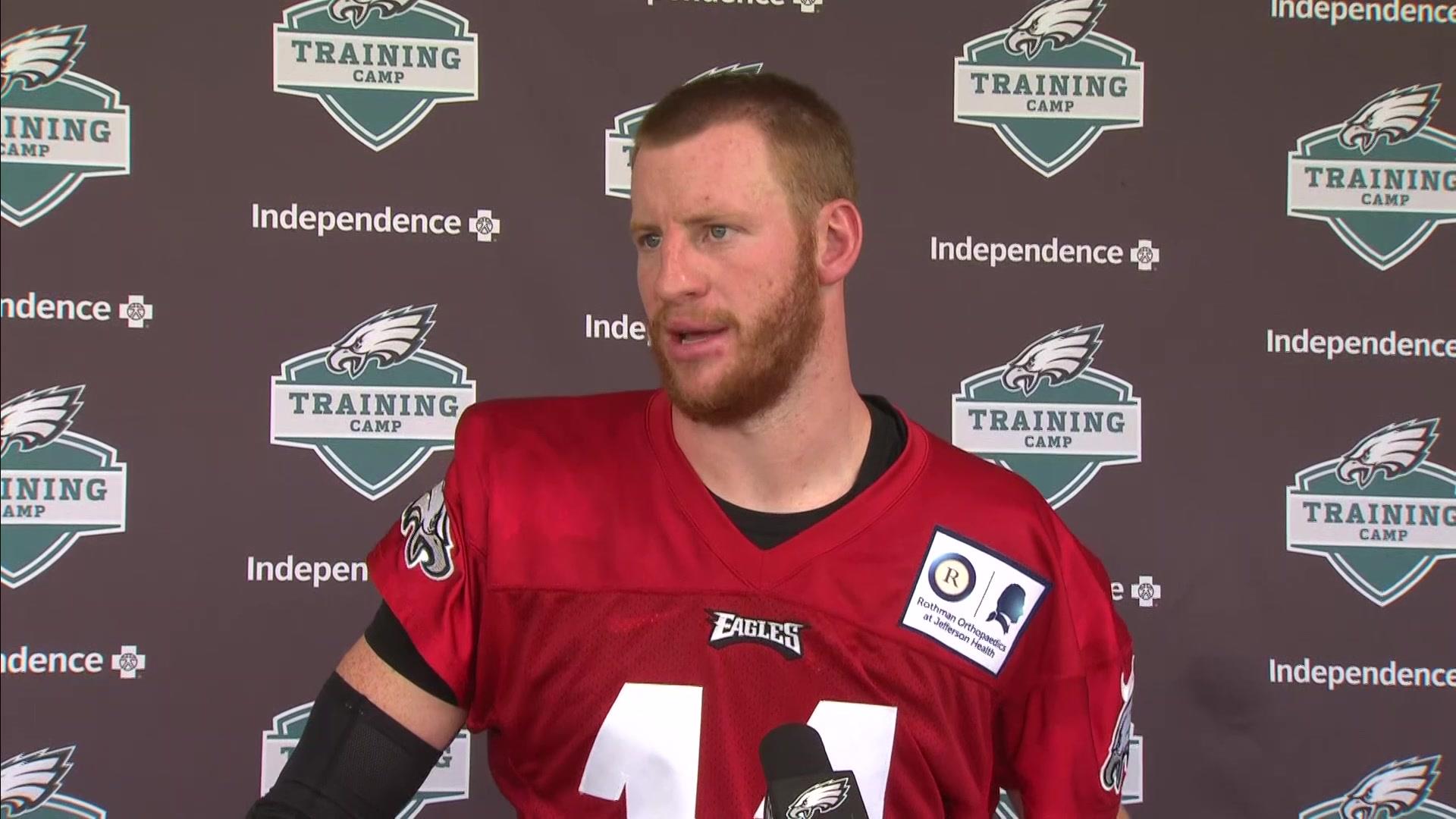 • Doug Pederson talks about players which players stood out when evaluating the tape and Wentz goes in-depth on chemistry development amongst the team.

Watch live as Doug Pederson and Carson Wentz meet with the media. https://t.co/mlRD2kbvUV

• The injuries to Kamu Grugier-Hill and the addition of Johnathan Cyprien started off the press conference for Doug Pederson this Sunday. The Super Bowl-winning coach also expressed why he believes Donovan McNabb deserves Hall of Fame consideration. 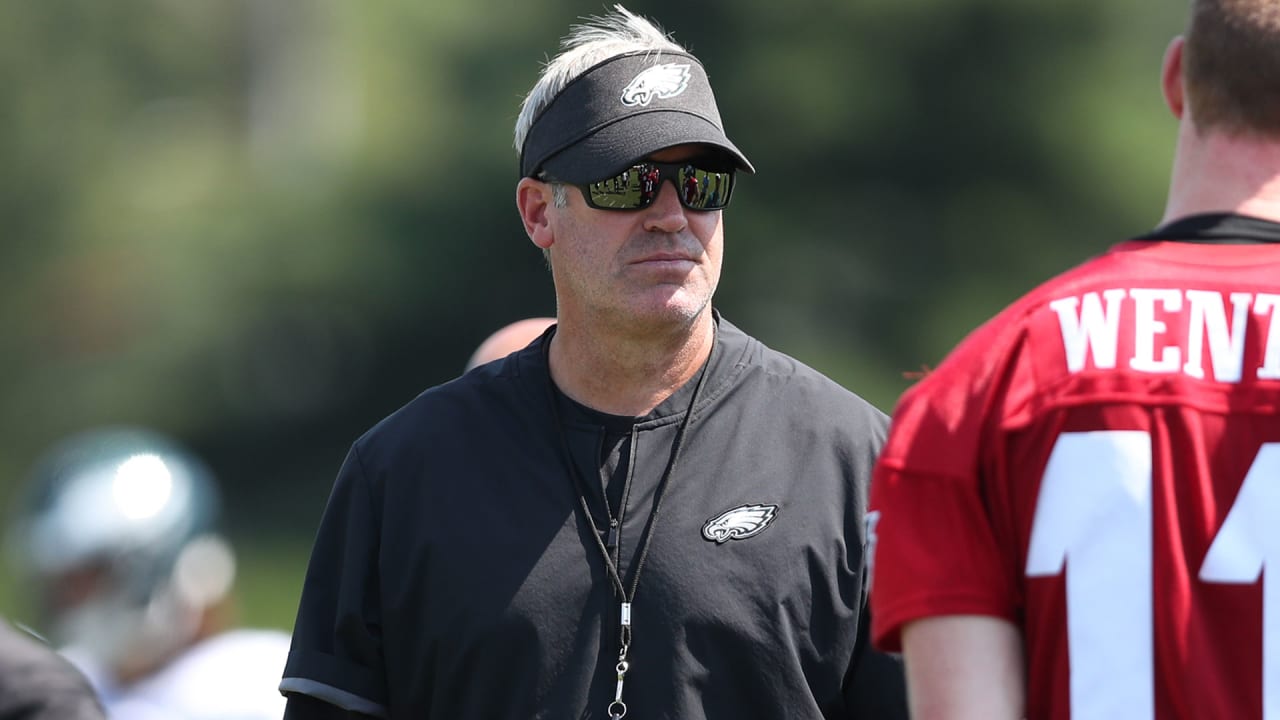 Q: Is there a good way to maximize both what TE Dallas Goedert does and what WR Nelson Agholor does because with Nelson playing out of the slot? I imagine it makes it harder.

Doug Pederson: It does. Again, who do you want on the field, who do you want off the field. There’s a fine line there. Both guys are talented and very explosive in our offense, and it’s all about the match-ups in this league, and however we can create the match-up value, we try to do that. You notice when we go 12 personnel, [TE] Zach [Ertz] goes to the slot receiver more and [TE] Dallas [Goedert] is the primary tight end, so Dallas is working against safeties and linebackers, where you get Zach working against either safety or a nickel defender. It’s just a matter of just the match-up you want. But right now, it’s about getting everybody sorts of equal opportunity, especially with [QB] Carson [Wentz]

Q: Even if some of your defensive starters who aren’t practicing do return over the next few weeks, at what point do you worry about this time they’re missing affecting them at the start of the season?

Doug Pederson: The one thing that’s good for a lot of these guys like — I think of [S] Rodney McLeod as an example; [DT] Fletcher [Cox] is another one. They’re getting individual work with their players. They’re out here listening to the team. All the team reps they’re watching. That’s valuable.

And again, these guys are veteran players who have been in our system for a long time. It’s now more about the physical, the actual conditioning of, you know, being game ready, so to speak.

But no real concern over them missing this time right now.

• Defensive coordinator Jim Schwartz touched on how the injuries and new additions will affect the defense. 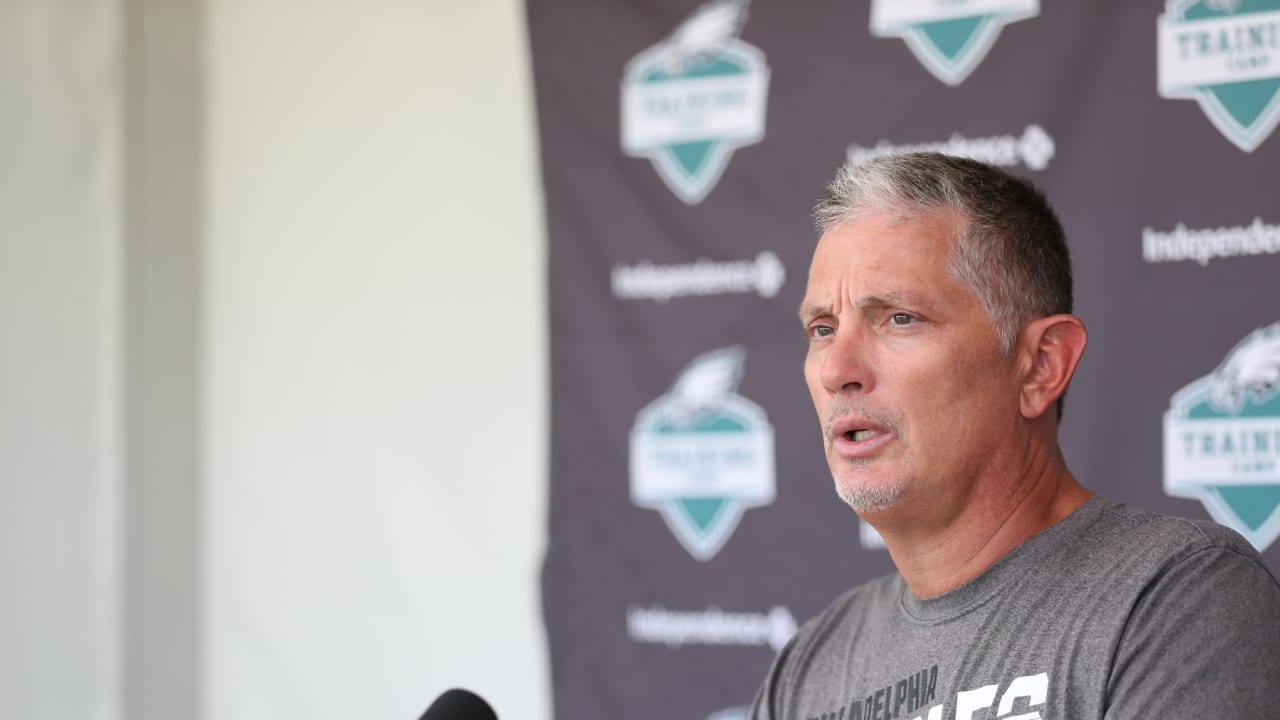 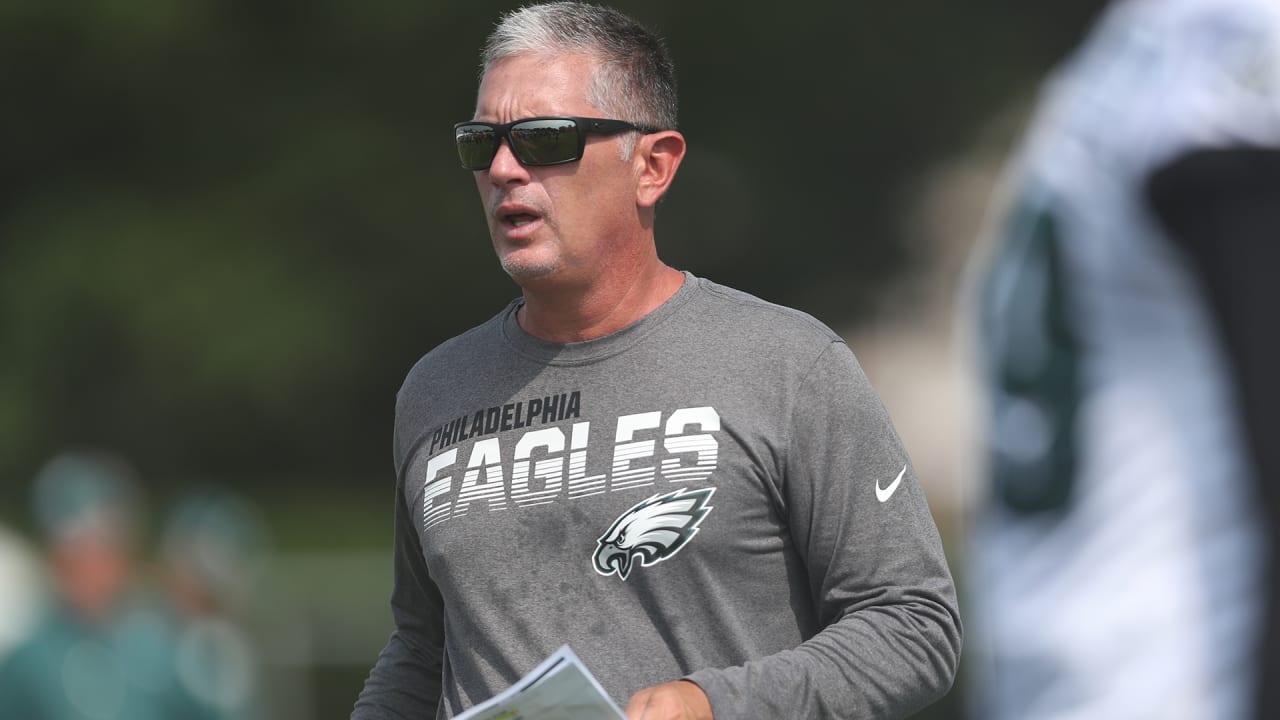 Q: Is there a silver lining? You mentioned last season with all the injuries in the secondary, and now CB Rasul Douglas and CB Avonte Maddox have shown up, who are self-assured. LB Nathan Gerry getting all the first-team reps that he has gotten, is that sort of a silver lining that maybe can be built on?

Jim Schwartz: We won some important games down the stretch last year with [LB] Nate [Nathan] Gerry as a starting linebacker for us. So we’re certainly confident putting him in games, and he has confidence in himself. One thing about him is you know he’ll be ready.

From Nate’s case, Nate played a lot of snaps for us in the opener last year when [LB] Nigel [Bradham] wasn’t available. And then when [former Eagles LB and current Cardinals LB] Jordan [Hicks] got injured down the line, played some really important snaps.

So I don’t know how much — we haven’t paid that much of a price for him being on the field. He’s helped us win. He’s made some big plays. Like I said, he was a key part of the winning those games down the stretch that was able to get us to the play. 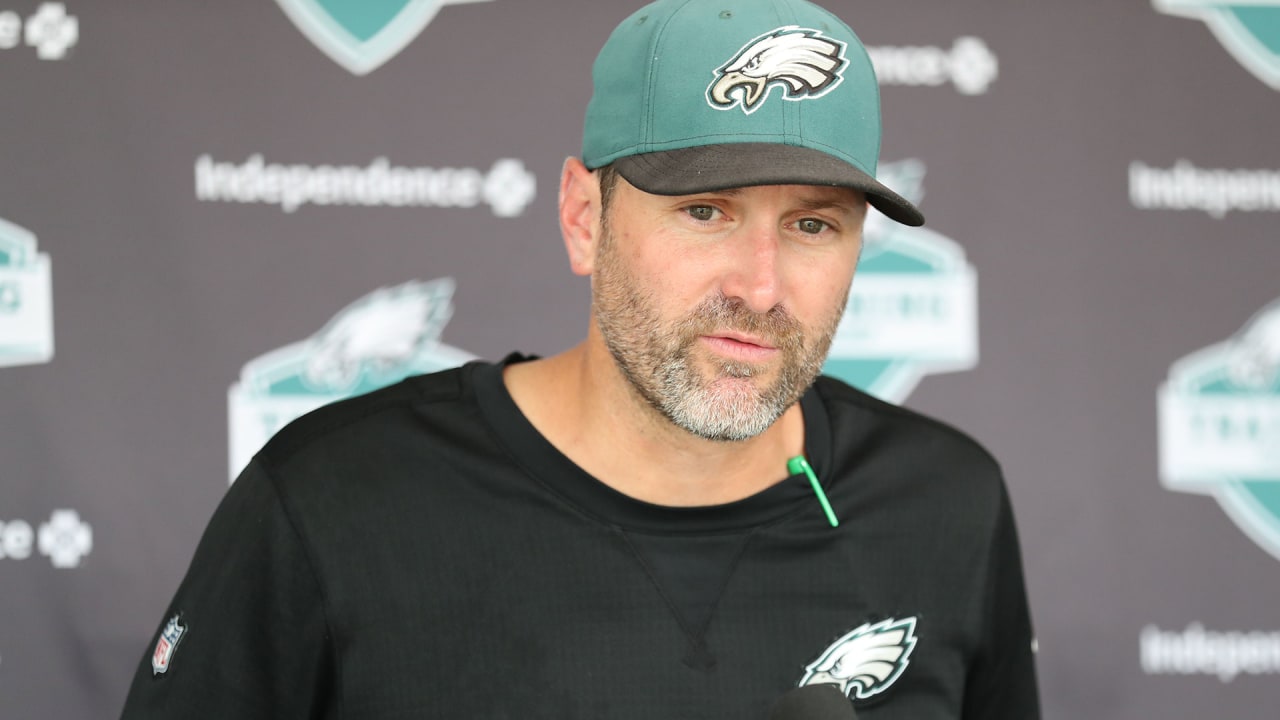 • Mike Groh talked about the stand out of camps so far on the offensive and defensive side of the ball. He also addressed the struggles and progression of the backup quarterbacks in camp. 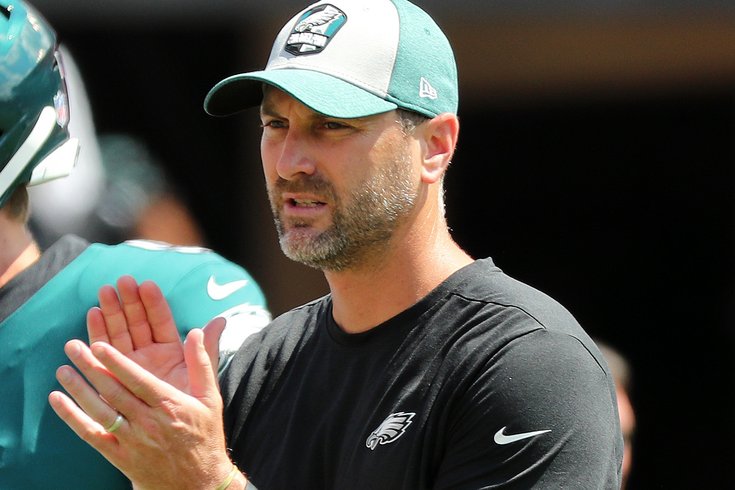 Q: The last time we spoke to you, in RB Miles Sanders’ case we had not seen much of him yet. You’ve had three more sessions. What’s stood out now that you’ve had exposure to pads and things of that nature?

Mike Groh: Like you said, we’ve been able to get him in there more. I think he’s feeling good with his fitness level. I think he’s getting more confident coming off the hamstring there in the spring. Again, he’s just learning how to run our plays. But there have been some plays where you are standing at it from behind, you say, “Wow, that was a really good cut right there,” unique skill level in the hole and in a short area and being able to make quick cuts and then get vertical, and he’s made some plays in the passing game down the field. I know it was [DE] Vinny [Curry] peeling out on him on the one down the field the other day, but it was still an over-the-shoulder throw and catch, really good throw by [QB] Carson [Wentz] and good play by Miles. 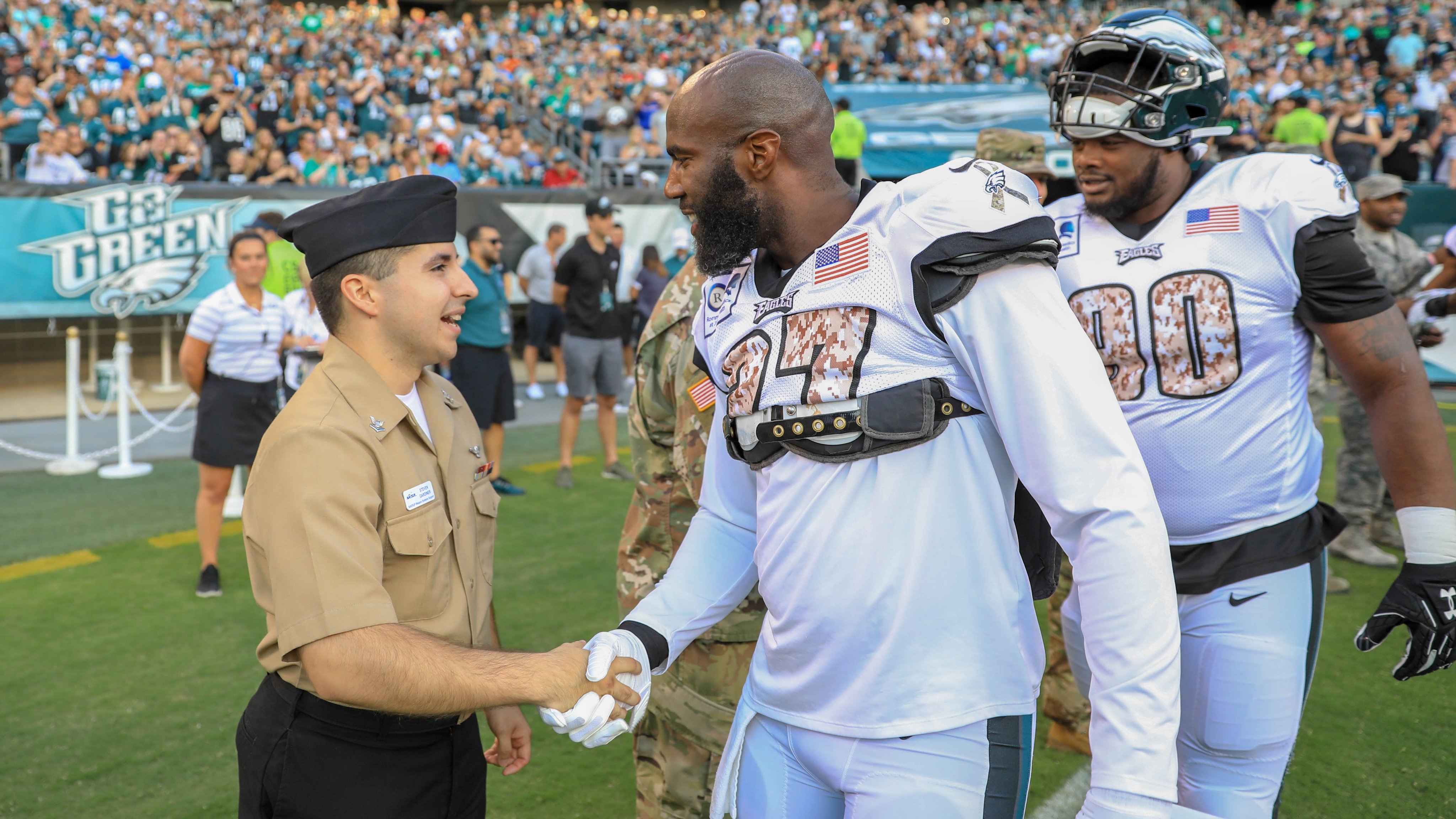 • Throughout the week Carson Wenz his a wide variety of wide receivers. The terms that were used to classify him were “razor-sharp” and “dialed in”. Wentz continued his sizzling summer throughout the multiple practices. 6-6 receiver Carlton Agudosi is constantly mentioned when Doug Pederson and Mike Groh are asked about depth guys. On the DeSean Jackson rest day, Agudosi made several contested catches. The Eagles don’t have many open slots at the position but with good tape, he may get a shot somewhere else.

• With the injury to Kamu Grugier-Hill, Zach Brown and Nate Gerry took first-team reps on Sunday night. It will be interesting to see the shuffle of the linebacker lineup once Nigel Bradham is healthy.

• Clayton Thorson continued his putrid spree in camp. Cody Kessler has supplanted him in reps and has begun getting third-team reps. An Eagles beat reporter tweeted, “Clayton Thorson just had a terrible throw down the field. Wobbled the entire way… channeling his inner Daniel Jones …” There’s not much experience behind Wentz. Thors was one of only five picks we had in the draft. Without improvement, the selection will remain baffling.

• The Miles Sanders praise continues to grow. He has an amazing jump cut in the open practice on Sunday night. The coaches, players, and media have lauded him all week long:

“Miles Sanders flashed another sweet jump cut in the red zone, getting around the edge for a score. Later, on a run to the right, he patiently let his blocks develop, and then boom, he accelerated through the hole with impressive speed. And finally, a hole opened up on a play in the middle of the field and he exploded through it to the second level, then juked a safety for added yardage. He’s the best running back on the team. Period. And it isn’t close.”

• Sidney Jones, Rasul Douglas, and Avonte Maddox maintained their impressive camps. The trio, who have been mixed in nickel packages, has several pass breakups last week. Jones stated that he’s “striving for perfection”.

• Rodney McLeod returned to team drills. Corey Clement has yet to do team drills in practice but he did tap some punt return reps and continued individual drills. 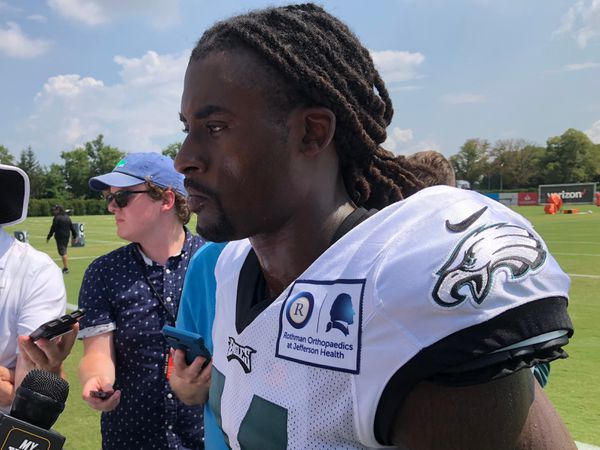 • Johnathan Cyprien: The Eagles signed former Titans and Jaguars safety Johnathan Cyprien to a one-year deal last week. Cyprien will wear number 41 for the Birds. defensive coordinator Jim Schwartz told reporters that Cyprien will be used all over the field, “We are going to plug him in in a lot of different places. We expect a lot from our safeties. We need multi-dimensional players; we think he is. We’ll just see where it takes us. . . . I think he fits well with us.”

• Injury Reaper Swings His Axe: Both DE Joe Ostman and LB Kamu Grugier-Hill were injured last week. Grugier-Hill and Ostman were sharing great camps. They each were distinctively single-out by staff in press conferences. Grugier-Hill was pegged to be a starting LB in the season. Ostman was in-line to clinch a roster spot as a rotational defensive end.  The Eagles have arguably the deepest team in the league. It appears that this league-wide belief will be put to the test.

• Roster Ranking: Speaking of rosters, ESPN ranked the Eagles as the second-best overall roster in the league. This isn’t really surprising considering the PFF ranking and the power rankings praise the team has received over the past few weeks.

•Deion Sanders on Eric Allen: NFL great Deion Sanders tweeted that former Eagles cornerback Eric Allen deserves a Hall of Fame induction. Sanders wrote, “WHEN IS HIS TURN ? COME ON WRITERS or WHOEVER Y’ALL ARE! @EricAllen619 and while you’re checking this out I have several more because I heard next year is a free for all so to speak.”

• Eagles Open Practice: More than 40,000 fans attended the Eagles open practice this Sunday night. It was also Military Appreciation Night and featured a jersey swap between members of the armed forces and the players. Don Smolenski, Philadelphia Eagles President, had this to say about the charitable and fan-favorite event,  “We have incredible fans and are excited to have their support as we honor the men and women in uniform while also raising more than $475,000 for cutting-edge autism research.”

Bonus Points: The Best Player Interactions of the Week. 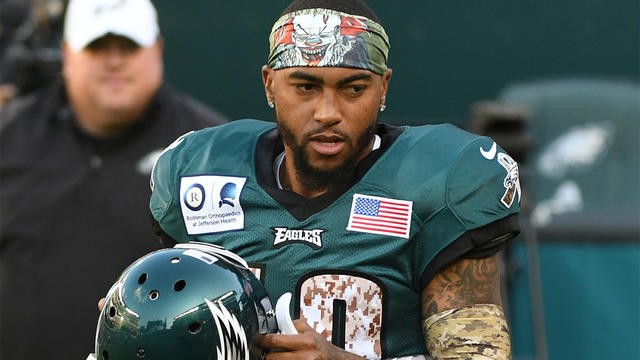 • Watch below, as DeSean Jackson made his return to the Linc. The speedy wide receiver spoke on the amazing moment,  “It’s been like five years since I came out that tunnel. The support is always great. It ain’t changed one bit. I’m happy, I’m excited for this year. Iit’s Philadelphia, it don’t get no better than this!”

DeSean Jackson. In an Eagles Jersey. At the Linc. Again. @FOX29philly #FlyEaglesFly pic.twitter.com/oPSAJtqjcZ

• The jersey exchange from last night really signifies what the night is all about.