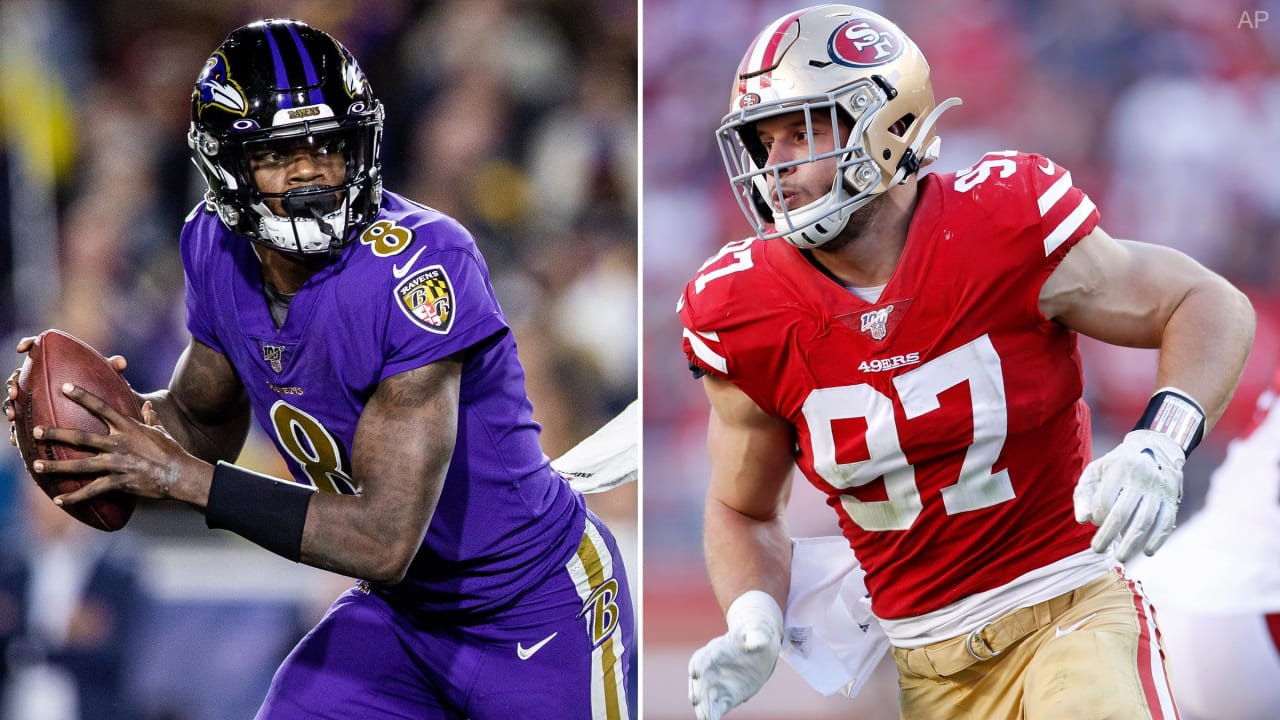 As we enter the last week of another unpredictable NFL season, it faces us with our biggest challenge. The final week brings a high level of uncertainty. Teams are positioning themselves for the postseason, fighting for the future of the coaching staff, or just ready to turn the page and prepare for the offseason. Motivations are mixed, as are the results in one of the most difficult weeks of the season to forecast.

If you are uncomfortable investing in this weekend’s games, there is an opportunity on the team future’s board to pencil in your picks for the conference championship and Super Bowl Winners. Now that we have to 16 weeks of data to use for our playoff push, the odds are more in your favor to make an informed decision than ever. Before we dive into the team futures, let’s check out the players future available and recap how we did this season.

We will remember 2019 as the year of Lamar Jackson. The Baltimore Ravens are the top team in the NFL and Jackson has been the best player in the league by a significant margin. I recommended that you grab Lamar Jackson at +150 this time last month. It’s been a remarkable year for the Baltimore QB, but the ship on his value left the dock weeks ago. It’s hard to grasp Jackson was at +6600 before the season and even +5000 after his dominating Week 1 performance in the Ravens 59-10 win against the Dolphins. After Week 6, Jackson’s odds to take home the award were still as high as +3000. That’s a better value than the current odds (+2000) for Russell Wilson, the man poised to finish as the runner-up in this race. If you don’t already have a ticket with Lamar Jackson’s name on it, your best bet is to remain on the sidelines for this one.

New England’s lockdown corner has been leading the way for this award for most of the season, and it’s no surprise he is the odds-on favorite. Gilmore has two interception returns for touchdowns and leads the NFL in interceptions and passes deflected. He has only allowed a 35.7% completion percentage while consistently being tasked to cover the opposition’s most dangerous receiving threat. In a league that makes it impossible to impede pass-catchers, Gilmore’s accomplishments this season are definitely worthy of the award.

Gilmore’s only true threat to the award is ex-teammate, Chandler Jones. Jones now with the Cardinals has 19 sacks this season and is zeroing in on Michael Strahan’s all-time sack record. Despite being only the third player in NFL history to achieve multiple four-sack games in a season, he would need another four-sack performance to break Strahan’s record. Jones joined Robert Mathis as the only two players in history to rack up over 15 sacks and eight forced fumbles. The Rams did a nice job of keeping Jones at bay in their first matchup, so I think the Strahan’s record is safe as well as Gilmore’s grasp on this award. At +550 odds, I wouldn’t recommend reaching for Arizona’s sack specialist.

Most of the other player futures are off the board. Jameis Winston and Nick Chubb are both in full control of the passing yards and rushing yards titles. Winston leads Prescott by 308 yards with 4,908 yards total on the season. Nick Chubb has a 94 yard lead on Christian McCaffrey and will look to add on to his season total of 1,453 yards. I recommended grabbing Winston at +1400 and Chubb at +1000 after Week 4. Congrats if you took advantage of the opportunity on these two as it appears they should both cash in big this weekend.

There are plenty more opportunities on the team futures cards as the battle begins next week for the NFL’s most prized possession. With the Lombardi trophy on the line, let’s look at who might bring some value in early 2020 as the playoffs unfold.

The entire season I have been a strong proponent of grabbing the New Orleans Saints at value. They were +1200 in early October, and +600 at the end of November. As we get the final week of the season and the odds have moved to +550, I am less confident in their ability to let Drew Brees ride off into the sunset. The San Francisco 49ers should be able to secure home-field advantage Sunday night with a victory over the Seattle Seahawks. Based on the way they could score with ease in the Big Easy during their 48-46 win versus the Saints, I can’t see Sean Payton getting past Kyle Shanahan this post-season. Injuries have left the Saints defense comprised to where the 49ers, who are at equal value with the Saints at +550, are the best bet to come out of the NFC and upset the Ravens. If you are not a believer in the Ravens, take San Francisco at +550.

I am a believer in Lamar Jackson and will be backing the Baltimore Ravens to win the Super Bowl at +275. The Ravens are at the forefront of the favorites and see no reason they can’t continue their dominance in the postseason. The Ravens are a team built to win the playoffs. Baltimore is the consensus best team in football and ranks No.1 in both overall DVOA and offensive DVOA. They posted a historic season rushing the football and rank No.1 in both offensive explosive plays and rushing explosive plays. They rank 4th in defensive DVOA and have held opponents to 13.7 points per game in the second half of the season. More impressively, since facing the Chiefs in Week 3, Baltimore faced five teams that will qualify for the postseason this year. They held those teams to an average of 15.4 points per game and not one scored more than two touchdowns. That list includes their biggest challenges, New England and San Francisco.

The narrative throughout the NFL is that Bill Belichick will “figure out” Lamar Jackson. However, history paints a much different picture. Per NFL research (via si.com), the Patriots struggle in this scenario. They are 0-5 in the postseason, the last five times they faced an opponent that beat them in the regular season. They are only 3-6 since 2001. This is a great advantage for Raven’s backers, as the public perception of the Patriots is bloating the Raven’s odds. I see a significant value with a Baltimore team that has enjoyed postseason success against New England. I will jump at the chance to take such a dominating team at +275.

The Saints are still the favorite to come out of the NFC at +200. I discussed above some concerns I have with New Orleans being able to overcome having to go through San Francisco. Defensively, I don’t have the confidence their success can travel outside of the Superdome. If the 49ers and Packers win as I expect, they will lose the luxury of a first-round bye. Take into consideration their path to the Super Bowl would travel through Green Bay and San Francisco, and I think it’s time to look elsewhere in the NFC.

Aaron Rodgers and the Packers continue to impress, and I think their style of play lends itself to playoff success. They can stand in the Saints way, but the 49ers are a different animal. As we saw in their head-to-head matchup in San Francisco towards the end of November, the 49ers matchup perfectly with the Packers. The 49ers defense held Rodgers to 104 yards passing, 3.2 yards per completion and racked up five sacks. If you believe like I do that the 49ers wrap up home-field advantage on Sunday night, then it’s time to cash in on them at +200 to win the NFC.