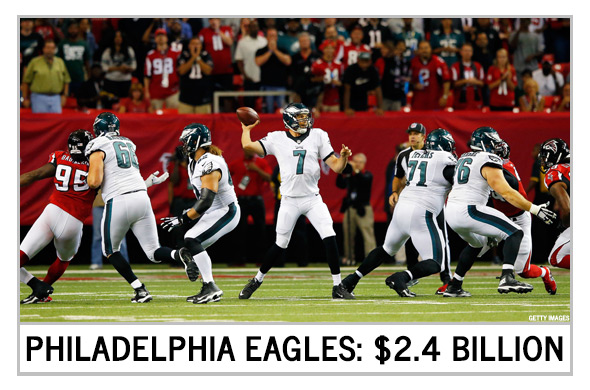 It might not seem like it, especially this last week, but the Eagles are the ninth most valuable franchise in the NFL, according to a recent report in Forbes Magazine. The Eagles are more valuable than the Green Bay Packers, a team that’s publicly owned, but are worth almost half than their rival Dallas Cowboys are. Not something you needed to hear today, is it? More on the Eagles:

Jeffrey Lurie bought the Philadelphia Eagles for $185 million in 1994. Today, the team is worth $2.4 billion, with $370 million in revenue and $88.7 million in operating income.

Forbes points out that the Eagles refinanced about $120 million of stadium debt and $70 million of debt related to its Lincoln Financial Field renovations, taking advantage of low interest rates. The stadium, which opened in 2003, cost $360 million to build.

The Eagles’ player expenses are $167 million, but one famous player not included in the mix is quarterback Tim Tebow. He was cut by the team before the start of the season in September.

This is why losing is so frustrating. The Eagles are valuable, but they’re the least valuable team in the NFC East right now. When does that translate to Super Bowls? We’re still waiting, Jeff.