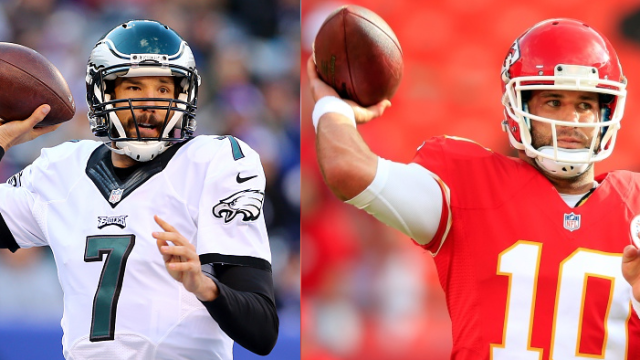 Everyone’s favorite CBS Sports NFL Insider, Jason La Canfora, seems to think he knows it all. Except he doesn’t. He’s known for throwing some wild ideas out there to get the speculation train going. He recently did a write up on what his crystal ball says about Sam Bradford and six other quarterbacks. We all know that the Bradford situation is a messy one and it’s likely that it lingers on into the season as long as he’s on the team.

Bradford recently attended training camp and rescinded his trade demand because at the end of the day, he really had no other options but to return to the Eagles. The Broncos seemed the likely and logical destination, but Bradford’s agent, Tom Condon, said that despite negotiations, a deal couldn’t be reached.

So while we all like to speculate how the Bradford saga will eventually play out, here’s what La Canfora had to say about the situation, via CBS Sports.

Aw, poor Sam. My thoughts and prayers remain with him and agent Tom Condon during their time of introspection in the face of the indignities perpetrated by the Eagles, which inspired the lamest trade demand in the modern era of professional sports.

I only hope these guys found a yogi, a higher-being — maybe the Dali Lama had some free time? — to help guide them through the abyss they faced for these past few weeks and the horror they had to live through watching the Eagles draft Carson Wentz second overall. I bet the climate control in his mansion was a few degrees off and the finger sandwiches weren’t cut properly either that night.

Tough gig, man. But let me let you in on a little secret — this holdout/trade demand/temper tantrum has had the durability of an average Bradford season. He’s got nowhere to go, nobody else wants him (which is why he signed a bloated Band-aid contract in the first place, and only so many shoulders to cry on besides Condon’s).

He’ll be back to work soon enough, probably even Monday, and he’ll try to say all the right things. The problem is he’s still a guy with like a .300 winning percentage.

My crystal ball says: Forget Wentz. Bradford loses his job to Chase Daniel — the new coach’s handpicked backup, by Thanksgiving. If that’s the case, again, godspeed out there on the open market next year.”

He, of course, went with the predictable option. But I’m not even sure that Bradford lasts that far into the season, unless he’s a good soldier and shuts his mouth and plays with a chip on his shoulder. The ball is clearly in his court and I just don’t see how this story ends up with a happy ending.

I see this remaining a distraction until he’s off the team. But heck, I’ve been wrong before, so maybe this turns out differently. I just highly doubt it.