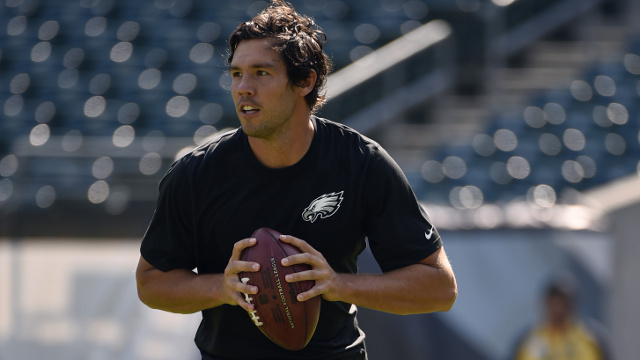 As I mentioned earlier, WWE Hall of Famer Jim Ross joined The Straight Shooters wrestling podcast last night to preview WWE’s upcoming SummerSlam pay-per-view after my in-depth preview for the event was posted on PhillyVoice.com. Ross is also a connoisseur of college football being probably the biggest fan of the Oklahoma Sooners in the country.

We talked to Ross about Lane Johnson [you can read his thoughts on Johnson here] and Sam Bradford because we knew he’d be well-versed in the subject. He gave his thoughts on Bradford and as someone who followed him all throughout college and his years in the NFL since he was drafted by the St. Louis Rams, and I’m borderline thrilled with what Ross said. If, you know, Bradford stays healthy.

“I have a lot of respect of what Gil Brandt says about football. If you’re an NFL fan and you don’t follow Gil Brandt on Twitter, you ought to [Editor’s note: You can do that here]. I know the guy, so I don’t have a dog in the hunt here. I just know that he’s really, really smart. He said that Sam Bradford’s Pro Day here in Norman was the best Pro Day he’s seen in his entire career aside from Peyton Manning. So if Peyton Manning and Sam Bradford had the same eye-level Pro Day, that tells you how Sam Bradford is as a quarterback when he’s healthy and doing things he’s comfortable doing. So if the coaching staff there can find his comfort level as far as throwing the ball and what he does best, and Sammie can stay healthy – and Lane could’ve helped that with being on the field as the big left tackle – you got a great quarterback there. He really is.

“And I understand that people are gonna say, ‘Oh God, JR is just being a Sooner homer.’ I’ve seen him play. I saw him win the Heisman. I saw him play and throw the ball. Uncanny. I know that he was on the traveling ice hockey team in Oklahoma City. I know that he was All-State baseball shortstop at 6’4″. I know that he owns double-double in basketball in high school. I know he got a degree in Economics at OU. So I know all these things about this kid. He’s a good kid, great athlete, great leader, and even though you got [Carson Wentz] in the first round, good for him. Sam Bradford, if he’s healthy, he will never want for a job in the National Football League. He’ll win games for somebody. Whether it’s in Philadelphia or somebody else at some point in time.”

This just hasn’t translated to the NFL yet, though. Sam Bradford’s career in the NFL has been virtually nonexistent, whether it’s been injuries or never being given a chance to succeed with the front office building a team in front of him. People will always disagree with his ability to be successful in the NFL.

I also wanted to know what Ross thought about Bradford demanding a trade:

“I think he was justified in following the advice of his agent. I got an agent and I sometimes disagree in what we ought to do. And I think, well, I’m paying this guy and he’s pretty good at what he does. So, maybe I should listen. Sam made a judgment call to listen and it was a mistake. I can tell you for a fact, knowing him, I’ve had dinner with him, I’ve been around him socially – I’m not trying to be Larry King here dropping names – we got a little town here in Norman. He’s a local kid that played high school football in Oklahoma City. He’s just not that guy that a lot of people in Philadelphia probably thought he was. I think he is now on his decision to ask for a trade.

“He took the advice of his agent. The advice was, the people here were saying, ‘What’s up with Sam? That’s not Sam.’ So we all knew there was an ulterior motive here. It wasn’t Sam’s fault to demand a trade. Sam didn’t demand anything. He’s a good kid.”

What he thinks has been the biggest thing keeping Bradford from breaking out in the NFL:

“He’s the last No. 1 overall pick that got the big, big money in the NFL. He got $50-something million I think. The Rams didn’t have enough sense to put an offensive line around or get him some receivers that could get open. He kept having to hold the ball, hold the ball and then they had no line that could block. Two ACL rebuilds. That’s how that worked out.

“I was on the sideline in the OU team box for every game he ever played at OU. Every game. Home and away. And I often wondered that I don’t know Sam is gonna be the leader we need because he won’t say anything. He’s quiet. He didn’t want to hurt anyone’s feelings. And finally, his last full year there, and going into his senior year, he got over that. He became less extroverted. He’s such a nice kid with good parents. He’s just not an overbearing prick. He’s a nice guy. I think he’s a hidden gem there in Philadelphia.

“I understand the fans in Philly are tough and I don’t have a problem with that. They pay hard-earned money. They work hard for their bread. Tickets aren’t cheap to see the Eagles play. They’re frustrated. They want a winner. I understand that and I appreciate that. But give him a chance and and make sure that [offensive] line is decent and keep him healthy and you’ll be very surprised at how productive he’s gonna be.”

I don’t think many people would argue with Ross here. Give any quarterback protection, they’d have a better chance at succeeding than not. For our sake, I hope Ross is right and Bradford somehow makes us forget about that deplorable offensive line in front of him.

You can listen to the entire podcast, including an in-depth SummerSlam and NXT TakeOver: Brooklyn II preview, right here.