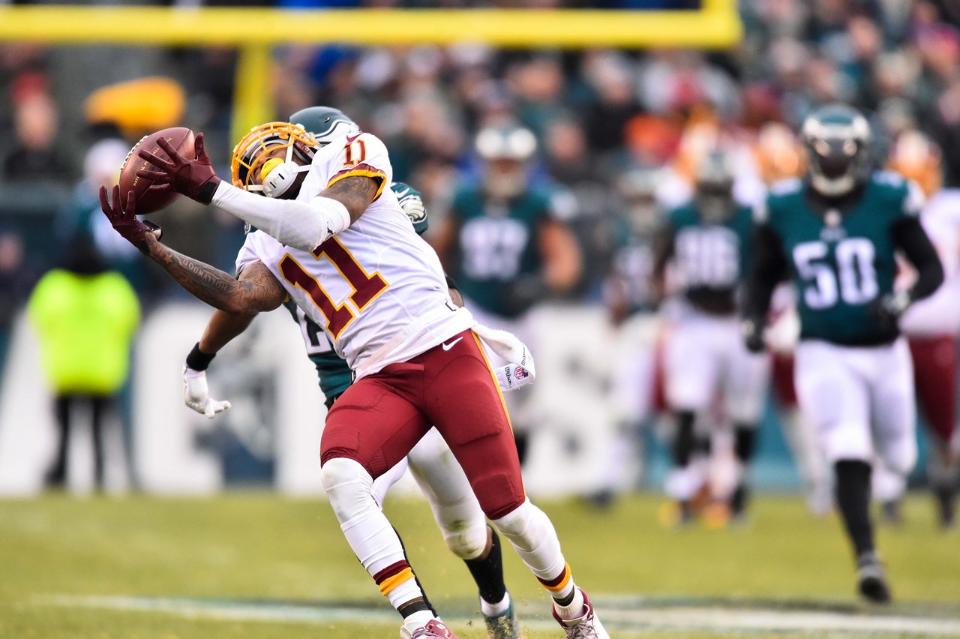 Here’s a topic that’s been debated the last few weeks, stemming from DeSean Jackson’s comments in October in which he didn’t rule out returning to the Eagles next season after he’s set to become a free agent this offseason. Should the Eagles go after DeSean Jackson in free agency when they clearly need some wide receiver help? It’s an interesting question. Jackson still has some speed, which we saw on full display yesterday at The Linc, but he only seems to have that extra mojo when it comes to playing the Eagles. Sure, in October, he only made four catches for 55 yards, but yesterday, he scored an impressive 80-yarder to go with two other catches for 102 total yards.

He’s still a sort of one-trick pony, but that’s sure as hell a better pony than anything the Eagles have at the wide receiver position. Jordan Matthews and Nelson Agholor, along with Dorial Green-Beckham, have made some nice grabs for the Birds in recent weeks, but there’s nothing sustainable when it comes to those three guys. They’re never consistent. Sure, Jackson isn’t exactly, either, but giving Carson Wentz the opportunity to utilize Jackson’s speed? I’d sure as hell sign up for that, even in 2017.

After Sunday’s game, Jackson talked about returning to Philly and how the fans didn’t boo him. Here’s what he said, via ESPN.

“[It’s] interesting, man,” said Jackson, released by the Philadelphia Eagles in the 2014 offseason. “First time ever … You never know. I’m not sure. We’ll see what happens. You never know how it plays out.”

“I wish I could do that every game, not just when I come back to Philly,” Jackson said of the touchdown. “Fortunately I was able to come back and make big plays against my former team, but regardless of who it is, I enjoy doing it.”

“Who wants to get booed, especially with all you’ve done and you started somewhere,” Jackson said. “I definitely don’t want to get booed, but it’s always great to get support regardless of who it’s coming from.”

Interesting that Jackson said “former team” when he didn’t have to say it at all. I still think he harbors some resentment – who wouldn’t? – but I don’t think he’d scoff at a return to Philly. He’d probably go to the team that offers the most money, but he isn’t a top flight receiver anymore. He probably won’t get much. Which means he’ll get five years and $100 million.