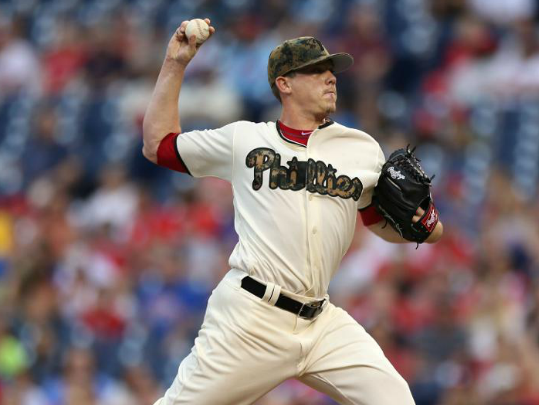 It should come as no surprise, but Jeremy Hellickson was named the Opening Day starting pitcher for the Phillies.

Manager Pete Mackanin made it official when speaking with the media at spring training this weekend. He had the following to say in regards to Hellickson taking the mound to start the 2017 campaign, via CSN Philly.

“He opened up for us last year and he had a real good year for us. I have a lot of confidence in him. I think he earned the right after last year.”

Hellickson was 12-10 with a 3.71 ERA a year ago, his first campaign with the Phillies, and he is ready to kickoff the season once again for the team, according to what he said below.

“Everyone wants to take the ball on Opening Day. To do that is a huge honor and I’m excited for it. It’s going to be a fun atmosphere. Last year being my first one, it was something I’d dreamed of, and Cincinnati was an awesome place to do that so it will be fun again this year. I’ll try to do the same thing I did last year because it was one of my better starts.”

Although Hellickson was the odds-on favorite to get the nod for Opening Day, he wasn’t the only candidate. Jerad Eickhoff also was under consideration by Mackanin and the coaching staff, according to reports. The 26-year old Eickhoff was a constant in the rotation last year for the Phillies as he led the team in starts and ERA a year ago.