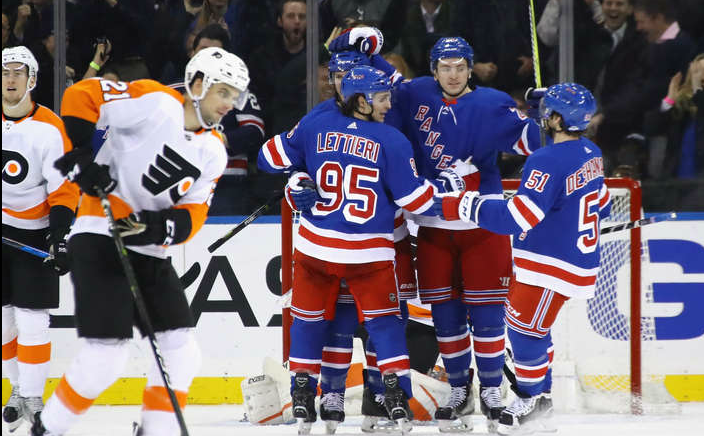 In typical Philadelphia Flyers fashion, the Orange and Black fell flat on their collective faces Tuesday night with a chance to climb into a playoff spot for the first time in a long time this season.

To start the night, the Rangers were only one point ahead of the Flyers in the Metropolitan Division standings, and if the Flyers would’ve won the game, they would have gotten into the second Wild Card spot in the east.

Alas, it was not meant to be.

The Flyers started well, opening up the scoring with a great tip by Jordan Weal off of a point shot by Radko Gudas. Unfortunately, that was the Flyers’ lone score of the night.

The Rangers scored five, yes FIVE, unanswered goals. It was not a good night for Brian Elliott who got the start but was pulled at the end of the second period in favor of Michal Neuvirth, who pitched a third period shutout. Postives.

The game was not the story.

The Flyers had a four-game winning streak coming into this game and tried to exorcise their demons at Madison Square Garden and prove to the world on national television [the game was also aired on the NBC Sports Network] that they are an up-and-coming team and that they are going to make the playoffs this year.

Let’s not kid ourselves, the Flyers were a playoff bubble team to begin the year and they still are, especially in the “Metrodome” Division.

If you would have told me at the beginning of the year that both Giroux and Voracek would be on pace for 90+ points, Couturier would be top five in goals scored at the midway point of the season and Gostisbehere would have over 30 points with half the season to go, I would have said the Flyers have to be first in their division!

This team lacks serious consistency and it has been that way for as long as I can remember. They do not have consistency in goal, which the spot that needs to be the most stable in the NHL, nor do they have consistency on defense.

Dave Hakstol has decided that putting the two worst defensemen in Andrew MacDonald and Brandon Manning on a pairing is a good idea and they got seriously exposed against the Rangers. Both players show a serious lack of hockey IQ, positioning, and speed which are all things needed to excel as a defensemen in today’s NHL.

The Flyers do have some great talent in Giroux, Voracek, Couturier, Gostisbehere and Provorov, but as long as players like Lehtera, Manning and MacDonald get into games on a consistent basis, this team will not have a shot at the playoffs, let alone the Stanley Cup.

The Flyers are back at it against the young and speedy Toronto Maple Leafs on Thursday at home, hopefully they can shake the demons from this game and get back on the winning track before they lose more ground in the Metro.

lights, via the Rangers’ feed, below.