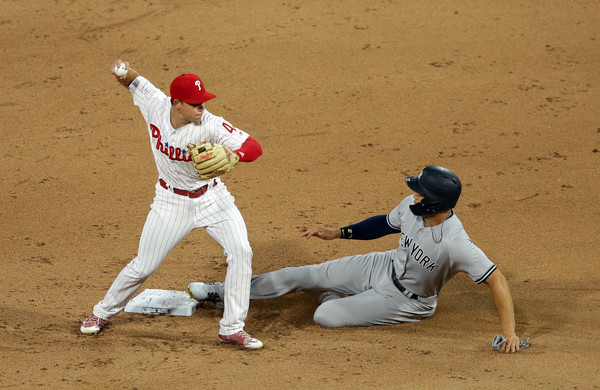 The Phillies could have easily tucked their tails between their legs and phoned in the third game of their series with the Yankees after falling down two games to none. Instead they came out and played well behind a strong performance by Zach Eflin.

Eflin who threw seven innings, allowed four hits and struckout six – set the Phillies up for success against one of the best teams in baseball. Rhys Hoskins hit a three-run homerun in the second inning was enough to win the game.

Taking game three was a huge testament to the heart and fight of this Phillies team. It also gives them a good boost before their four game series against the Nationals that starts on June 28.

The starters for the series for the Phillies will be Aaron Nola, Nick Pivetta, Vince Velasquez and Jake Arrieta. Before the season I would bet that Nola and Arrieta, for sure, would put up quality starts and give the team a solid chance to win. On the other hand I would be worried about Pivetta and Velasquez. right now, I’m confident that Nola will give the team enough to win game one. Pivetta and Velasquez are still question marks but they have been trending upwards this season. Arrieta has been struggling since he called out Scott Kingery earlier this month. He needs to turn it around if the Phillies want to – at least – split the series.

For what it’s worth, Nationals are saying they will not use Max Scherzer this weekend vs. Phillies. Probables: Roark, Fedde, Hellickson, Gonzalez.

It’s huge that the Phillies could possibly avoid Scherzer. I see no reason why the Phillies can’t take three of these four games against those starters. The Phillies offense will have plenty of chances to score runs against those four guys. It all falls back on the Phils starters to keep a potent Nationals offense in check.

I already mentioned it, but the pitching needs to show up if the Phillies want to take this series. I’m not just talking about the starters, I mean the bullpen too. Seranthony Dominguez can’t do it alone; he needs help from the other guys. There’s a chance the Phillies will see Pat Neshek for the first time this season as he’s finishing up a rehab assignment.

Pat Neshek will make another rehab appearance on Friday. Chance that he could be activated following that game.

If Neshek comes up, over the weekend look for him to get immersed later in the series. He will provide an immediate upgrade to the bullpen and could steady the ship.

Taking game three of the Yankees series was huge. It showed that this team puts the “Fight” in Fightin’ Phils and it will give them a huge confidence boost to take on a division rival with direct implications to the standings.

My prediction for the four games: the Phillies take three games behind excellent starts by Nola, Velasquez and Arrieta. Scott Kingery stays hot at the plate and mashes his fourth major league homerun and contributes on the defensive end as well. If the Phils take three games they will have a two game cushion over the Nationals while closing the gap on the Braves. They would take a 45-37 record down to Baltimore where they’ll be able to build on an impressive stretch against one of the worst teams in baseball. In the first game of that series Zach Eflin will take the mound after going 5-0 in June.  It’s an exciting time to be a Phillies fan, isn’t it?