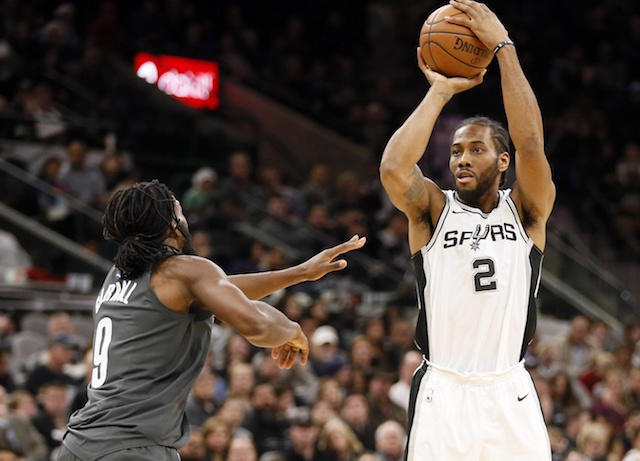 Earlier today, ESPN’s Adrian Wojnarowski tweeted that the San Antonio Spurs were ready to move on from Kawhi Leonard, after weeks of back-and-forth reports of the team wanting to keep him while he wanted out. According to Woj, the Los Angeles Lakers and Boston Celtics were at the forefront of those trade talks, with the Celtics possessing the assets the Spurs coveted most.

Just yesterday, Woj reported that the Celtics were among the teams to have already made offers for Leonard to the Spurs, along with the Cavaliers, Clippers and, yes, the Sixers.

Today, the picture may have gotten a little bit more clearer from the Sixers side of what they might potentially offer the Spurs in a trade, according to SI’s Jake Fischer. And, according to Fischer, the Sixers haven’t yet made a formal offer to the Spurs.

The Spurs are ramping up Kawhi Leonard trade talks and two Eastern Conference teams appear to be jockeying for position. The Philadelphia 76ers have recognized the Spurs’ and L.A. Lakers’ urgency to complete a deal, sources say. And while the Sixers have not made a formal offer to San Antonio at this time, Philadelphia has held serious internal discussions about acquiring Leonard over the last 48 hours. The front office has presented team ownership with several trade scenarios for discussion, sources say.

In the article, Fischer notes the Spurs have made it known the target they want to the most is the Celtics’ Jayson Tatum, while Boston would prefer to make a deal with Kyrie Irving as the centerpiece. But then the more interesting note, for Philly’s sake, is the report includes trade packages the Sixers were looking to put together to try and get Leonard.

The Sixers reportedly declined any trade offers that included Saric and Covington to move up in the NBA Draft. However, these two talents would hardly be labeled “irreplaceable” should a deal for Leonard be worked out between the two teams.

Then there’s always the possibility of the Sixers signing a big free agent. Rumors have ramped up that LeBron James would likely go to Los Angeles or stay in Cleveland, but the Sixers still have a realistic shot of signing him.

One thing’s for sure – the next few days in the NBA off-season certainly won’t be boring.