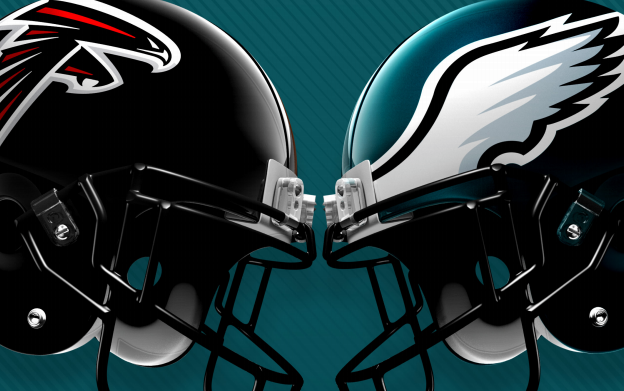 I typed those same exact two sentences during our last predictions post – Super Bowl LII. As you might’ve expected, nobody on the Pi staff thought the Patriots would beat the Eagles in that game. Call it destiny. Call it fate. Call it whatever you want.

But we’re finally here. We’re finally going to see a Super Bowl banner raised at Lincoln Financial Field on Thursday night. We’re going to see the Philadelphia Eagles, for the first time in team history, begin a Super Bowl championship defense. And they’re doing it against the team that almost defeated them in last season’s first playoff game in the Atlanta Falcons.

People are high on the Falcons. People are low on the Eagles. Remember, the Eagles didn’t look too good during last year’s preseason. You really think Doug Pederson was going to show, oh, I don’t know, anything during preseason?

There’s a lot of negativity swirling about the defending champions, and understandably so. Nick Foles was brutal in the preseason. It doesn’t sound like Alshon Jeffery will be suiting up in the opener. The Birds are missing the suspended Nigel Bradham, who was instrumental in eliminating the Falcons last postseason.

But, fear not. While the oddsmakers changed the line in favor of Atlanta with the news of Foles starting, it appears they may be forgetting one crucial element – Lincoln Financial Field. Why did the Eagles make it to the Super Bowl? Home-field advantage. Even if the players completely ignore the pomp and pageantry, the fans will more than soak up the unveiling of the city’s first Super Bowl banner. South Philadelphia isn’t a friendly place to be. As long as the game is close, the energy will be electric. Good luck to Matt Ryan and company, who haven’t fared well historically at The Linc. It’s going to be ugly. Foles will need to be better. Truth is, he can’t get any worse. Doug Pederson’s game planning will do Foles a world of wonders. And even minus Bradham, the Birds’ D will step up enough and hold the Falcons to field goals at worst. Get out the underdog masks!

There was only one defense that slowed down the Eagles offense in the 2017 playoffs, the Atlanta Falcons. Atlanta comes into this game virtually healthy while the Birds will be relying on Doug Pederson’s creativity and some unproven pass catchers to win matchups. The mainstay of last season was how lights out the Eagles defense played at home. I think that trend continues along with Matt Ryan’s struggles in Philadelphia. The Eagles win in another brutal Battle of the Birds.

There’s no doubt in my mind that the Eagles will win on Thursday night. The crowd will be electric once that Super Bowl banner is raised. This team is hungry to repeat and the Falcon offense isn’t going to be able to do a thing against this Eagle defense.

Nate Sudfeld could start this game and I’d still take the Eagles. Nick Foles will get the job done just like he did in the Divisional Round of the playoffs.

Now that we know who the starting quarterback will be, the biggest question for the NFL’s opening night is which Eagles team will show up? Will it be the Playoff Eagles or the Preseason Eagles? There are more questions on the Eagles’ side than the Falcons’ this early in the season and some late scores put the Falcons up for good and spoil Banner Night at the Linc.

As we still come off our Super Bowl high, the Eagles are back in a familiar place for Week 1. The Atlanta Falcons have a chip on their shoulder as they were left with an image of their crown jewel just missing a winning touchdown catch as time expired on the same field they will be Thursday night. That was then, and this is now. Another year with a whole new set of conspiracy theories.

With Carson Wentz still on the mend, BDN will be leading the charge, hoping to ride the same wave he rode last year. However, he will be facing an underrated storm against Atlanta and one that needs a bigger surfboard to ride to victory. Either way, the banner will be raised, and we finally say we are the defending Super Bowl Champions.

The energy felt inside Lincoln Financial Field as the Super Bowl banner is raised will be the switch needed for Philadelphia to flip following a lackluster preseason. Jeffery’s absence will be felt on the outside, but I see Nelson Agholor, Zach Ertz and Dallas Goedert getting a bulk of the work in the passing game and faring well. I like the Eagles in this one.

LET’S GO! The Super Bowl Champions take the field as a two-point favorite and some of the most die-hards are worried. Come on! That’s not how a CHAMPION acts. Think about Conor McGregor and how he owns every octagon he gets in. I WANT THAT! Is the only reason why a small minority are worried is because Carson Wentz isn’t playing? The offense has looked sluggish? What is it!? Well, for me, I think the defense is ready to explode. Week 1, banner drops, all eyes are on us, we ain’t losing. Eagles start out 1-0.

It doesn’t seem like Atlanta’s struggles in Philly are being played up enough. Sure, they had a close playoff game here in January, but during their Super Bowl year, the Eagles handled them with ease at The Linc. Had Wentz started that playoff game against Atlanta, it might not have even been a close game in the second half.

And, most importantly, Jim Schwartz knows what it takes to beat the Falcons. Atlanta scores a cheap one at the end to make it close.