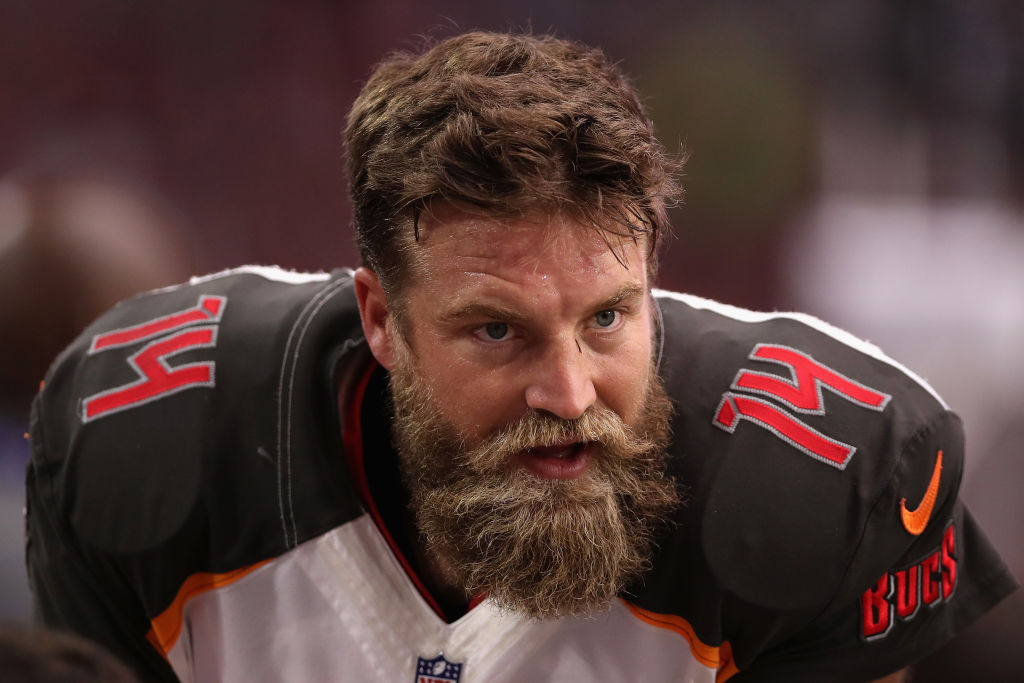 Carson Wentz has yet to be cleared, so Nick Foles gets at least one more week as the Eagles’ starting quarterback.

Philadelphia squares off with the pesky Tampa Bay Buccaneers, who come in riding a high following their 48-40 season-opening win in New Orleans.

Foles struggled to get going against Atlanta in Week 1, going 19-of-34 for 117 yards and averaging just 3.4 yards per pass attempt. His Alshon Jeffery-less receivers didn’t cause much separation.

“I thought Nick had a really good week of practice last week leading into the game. You’ve got to give credit to Atlanta defensively, so it’s a little of both. But Nick gets better each week, and the more reps he gets, just continues to get better.”

Pederson explained what he could do as a coach in an attempt to get Foles into a rhythm.

“One, we could hurry up tempo. I think it’s a good way to get the quarterback into rhythm. Then, early in games, find plays that are completion-type plays, that are kind of the no-brainer; you don’t have to think a lot; you’re not necessarily into the heat of the battle yet.

You always have those types of plays in your game plan that are just — the ball is out. Whether it’s a quick throw or quick play-action or something of that nature that becomes a quick little completion play for the quarterback, [it] can help him settle in and get into the game.”

Eagles offensive coordinator Mike Groh knows that the wideouts need to create more explosive plays, but did admit that they had some chances against Atlanta.

We had some chances down the field and didn’t capitalize on them. Atlanta has got a lot of talent over there. They’ve got excellent defensive backs. They made some plays on the football, too, which kept the production down.

We know that we’ve got to create more explosive plays and push the ball down the field.

Foles does get an easier secondary this week as Tampa Bay’s cornerback tandem of Carlton Davis and Brent Grimes is far less potent than the one of Desmond Trufant and Robert Alford in Atlanta. Maybe the receivers can get open this week and we see the good Foles. Tampa Bay was dead last in the NFL last year in passing yards allowed and sacks.

Zach Ertz needs to step up after an underwhelming debut. If the receivers on the outside aren’t getting open, Ertz’s success will be instrumental towards the Eagles moving the football. Ertz led the team in receiving yards last week with 48, but hauled in just five of his 10 targets.

I was hoping to see more out of rookie Dallas Goedert as well, but he had only one catch for four yards and bobbled a pass which led to an interception.

Nelson Agholor will have a mismatch in the slot with Tampa Bay announcing that slot cornerback Vernon Hargreaves is out for the season with a shoulder injury. He caught eight balls last week, but totaled just 33 yards on those receptions.

Darren Sproles could be a key component coming out of the backfield or in the slot. Kwon Alexander didn’t fare well with the speed and quickness of Alvin Kamara last week, he allowed nine receptions for 112 yards and a score. Sproles is obviously not as explosive as Kamara, but with Alexander struggling to keep up with Kamara coming out of his breaks, maybe Pederson tries to get Sproles involved in the passing game.

Jason Peters picked up where he left off last season, it’s like he never tore his ACL. He’ll be squaring off with Jason Pierre-Paul, while Lane Johnson battles former Eagle Vinny Curry.

Pretty amazing that a guy could miss all that time and step right back into one of the premier positions in the National Football League like he did for us. We know he’s just going to keep getting better week in and week out now that the games have started and he gets back out there and knocks a little bit of the rust off.

For week one, he played really well.

Jay Ajayi and the offensive line’s emergence in the second half against Atlanta was instrumental in the Eagles’ victory. Ajayi carried the ball just three times for 11 yards in the first half, but gained 49 on 12 totes in the second and scored a pair of touchdowns. The offensive line generated consistent push up the middle.

Clement for 21 on 3rd down and it’s Ajayi from 11 yards out with a key block from Peters. Eagles get the 2-point coversion as well to go in front 18-12. pic.twitter.com/0rC0rKCrbm

Groh was asked this week if Ajayi’s workload in the second half was part of the game plan.

“I think that was one of those things that just happened organically. It wasn’t something we set out to do. We didn’t have a lot of snaps in the first half and weren’t as productive as we wanted to be. That limited a lot of guys’ playing time in the first half in particular.

We really got the running game going in the fourth quarter, and Jay was a big part of that. I thought he ran really well and he looked strong running the football. Made some good plays, guys were bouncing off him, and he showed good vision.

He’ll continue to be a big part of what we do in the run game.”

The Buccaneers have two of the best linebackers in the game when it comes to stopping the run in Lavonte David and Alexander. Pro Football Focus ranked David as the second-best linebacker against the run.

Tampa Bay did, however, miss tackles on 13.5 percent of run plays last year, which was 26th. It attempted to improve its run defense with the first-round selection of Vita Vea and the free-agent acquisition of Beau Allen.

Ryan Fitzpatrick was 21-of-28 last week for 417 yards and four touchdowns, that isn’t going to happen again, right?

Fitzpatrick is a streaky quarterback like Foles and when he gets protected as well as he did last week, he can go off. But against the ferocious defensive line of the Birds, Fitzpatrick is in store for a reality check.

The Saints might have Cameron Jordan, but their pass rush is so bad that they spent two first-round picks to trade up for Marcus Davenport. That’s obviously not the case with Philly, tackles Donovan Smith and DeMar Dotson are going to have a tough time with Brandon Graham, Michael Bennett, Chris Long and Derek Barnett. And along the interior, Caleb Benenoch is no match for Fletcher Cox.

“They made a lot of big plays. [Buccaneers WR] DeSean Jackson down the field, [WR Mike] Evans, tight end. A lot of big plays. [QB Ryan] Fitzpatrick has been around for a long time. He got hot, and New Orleans had a hard time getting him stopped.

Yeah, it was eye opening to watch it for sure.”

Mike Evans led Bucs receivers with seven receptions for 147 yards and a touchdown against New Orleans. After going against Julio Jones and holding his own, Ronald Darby will square off with one of the game’s best receivers again. Marshon Lattimore couldn’t handle Evans last week.

DeSean Jackson brought in five passes for 146 yards and two scores. Jackson, however, is in concussion protocol and his status for Sunday’s game is uncertain. Chris Godwin is Tampa Bay’s third receiver, he’s a second-year player out of Penn State who scored a touchdown last week.

“DeSean Jackson has always been a guy that can take the top off the defense. We played him in a game two years ago and he made a lot of big plays like that. Took us a while to get adjusted to it.

And then you get a guy like Evans, even if he’s covered, he can still be open. He’s a very physical player. You have to be physical with him.

So there certainly is two different styles of player. They use them in different ways, also.”

O.J. Howard and Cameron Brate are a good tight-end pairing that the Eagles will have to account for as well.

“All their tight ends are huge, 6’6″ guys. Gives the quarterback a big strike zone to be able to throw it to.

You’ve got to be careful in man-to-man coverage of keeping good vision on the quarterback as well as seeing your player, because the quarterback has such a big area that he can throw a guy open. I mean, that’s a lot with their tight ends.”

Nigel Bradham will be back from his one-game suspension and Jordan Hicks looked outstanding last week in his first game back since injuring his Achilles.

“He looked a lot like he always has. I thought one of the biggest plays in the game was his sack. It wasn’t just getting the sack, but just the way he did it. It was such a physical play with such a – it really helped our defense sort of catch on fire.

I’ve said a lot times that Nigel Bradham has played that role for us and has been the heart and soul of our defense. Well, Jordan was able to give us that same kind of spark. I thought it was a really key part of the game. It was such a physical play.”

Tampa Bay’s ground game was ranked just 27th last year and it used a second-round selection on running back Ronald Jones, who was inactive in the opener.

Peyton Barber, last year’s leading rusher with just 423 yards on 3.9 yards per carry, toted the rock 19 times for 69 yards. At 235 pounds, Barber is a power back with vision, while the explosive Jones is more of a home-run threat.

PREDICTION: The cornerback tandem of Desmond Trufant and Robert Alford in Atlanta is one of the best in the NFL, but now the Eagles face one of the poorest in Tampa Bay. I think the receivers can get open. Philly’s pass rush is also a completely different beast than New Orleans, which needed an edge rusher so bad it traded up in the NFL Draft and traded two first-round picks for one. The good Nick Foles and the bad Ryan Fitzpatrick will show up in this one.