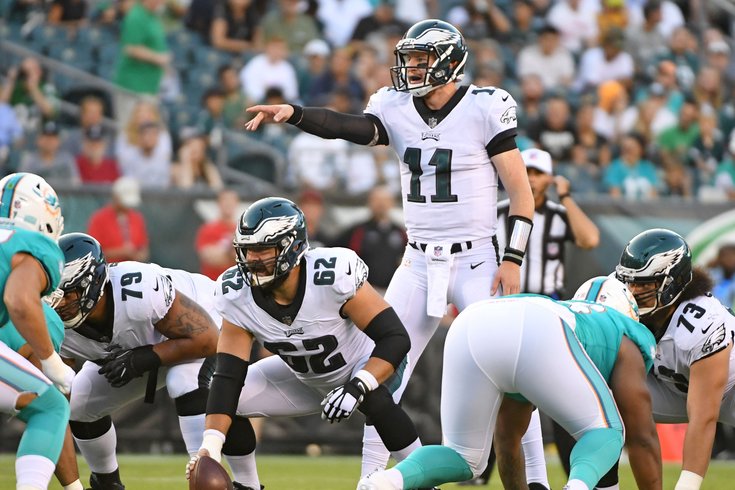 Can the Philadelphia Eagles’ offense be fixed in time?

They’ve got five games to figure it out, beginning with the Miami Dolphins on Sunday.

I thought Carson Wentz’s performance last Sunday against Seattle was the most disappointing of his career.

He was without right tackle Lane Johnson and right guard Brandon Brooks, he didn’t have his top three wide receivers Alshon Jeffery, DeSean Jackson or Nelson Agholor, nor his No. 1 running back Jordan Howard. It didn’t surprise me that the offense was struggling to move the ball, what disappointed me was the five turnovers in 14 possessions and the fumbles lost from Wentz.

This was a game where Wentz needed to step up in the absence of all the Eagles’ playmakers, instead he pressed trying to do too much. He held onto the ball too long in the pocket at times, looking to make the big completion downfield instead of looking for Miles Sanders coming out of the backfield. He wavered with his accuracy, especially in the first half and those two fumbles lost give him 17 since he’s come into the league.

Eagles head coach Doug Pederson didn’t think the tape was as bad as it initially appeared after re-watching the game.

“We pride ourselves with the offensive line, the backs, the tight ends, trying to keep our quarterback as clean as possible, especially early in a football game, it gets him into a flow.

But as the game progressed and again watching the film this morning, if you remove the turnovers, it’s really not as bad as it appears. The turnovers make it worse than it was because we didn’t capitalize [and] we didn’t stay on the field. We had some drives and then turnovers stopped us. Those are the things we have to clean up.”

“It’s not about one guy, honestly. Obviously the quarterback and the head coach get either the credit or the blame and as a play caller, rightfully so, and I’ll obviously take the heat for that.

We just, again, have to continue to work and everything is right in front of us.”

Speaking of Jeffery and Agholor, they appear to be on track to play Sunday.

“Yeah, they’re both doing well and trending in the right direction,” Pederson said Friday. “We’ll get through today; see where they’re at today and hopefully get them to the game.”

Johnson and Brooks will be back as well, with Johnson clearing concussion protocol.

“We’re excited to get Lane back. He’s had a good week and he’s in the right frame of mind. He’s excited to be back out there. Brandon is excited to have him back next to him. It’s good to get that offensive line back together.”

Second-round rookie J.J. Arcega-Whiteside will see more snaps on the outside now that Jordan Matthews has been released.

“J.J.’s been kind of cross training at a lot of different positions,” Pederson said. “We kept him at X, he’s learned Z, he can play Z. [WR] Mack [Hollins] obviously he can play all three. But J.J.’s kind of the guy now. He’s the one that’s in that position and he’s done some nice things these last couple of games. He’s gaining a little more confidence in that. Nelly [WR Nelson Agholor] obviously can play over there. And then bringing [WR] Greg [Ward] up obviously gets some flexibility in the slot. So J.J. and Mack can kind of fill that spot and really kind of back up a couple spots.”

Jordan Howard, who has missed his last two games due to a shoulder stinger has still not been cleared for contact.

Sanders would see the bulk of the load again and he comes off a solid game where he carried the ball 12 times for 63 yards. I’ve seen improvements in his vision and decisiveness over recent weeks, he’s seeing the cutback lanes better and hitting the hole harder than he was earlier in the season.

Jay Ajayi saw his first action of the season last Sunday, but was limited to 16 yards on six rushes.

If the Eagles’ defense has an Achilles’ heel, it’s going against quarterbacks who get the ball out quickly.

Fitzpatrick was 27-of-33 for 402 yards with four touchdowns and an interception against the Eagles as a member of the Tampa Bay Buccaneers last year in Week 2. Fitzpatrick doesn’t have the same weapons at his disposal nor as good of an offensive line in Miami, but he’s been an upgrade over Josh Rosen and has led the Dolphins in their two victories.

With that being said, the Eagles’ defense has turned the corner. Before the bye when Buffalo and Chicago failed to score more than 14 points, Philadelphia’s defensive performances were cast aside due to the pedestrian offensive talent that both teams possess.

But to hold the Patriots and Seahawks both to 17 points, yes this defense is rolling. Pressure from the defensive line has increased and the play of the secondary has improved considerably since Jalen Mills and Ronald Darby came back from their respective injuries.

The blitzes from defensive coordinator Jim Schwartz appear to be getting home more than they did earlier in the season.

“I think the corners obviously have a lot to do with it,” Schwartz said. “Now, I put an extreme amount of pressure on the corners in this last game. I mean, it’s hard to play [Seahawks QB] Russell Wilson and try to contain not only the passing game, but all his scrambles, unless your corners are going to have to shoulder an extremely heavy burden.

We also knew going into the game that they weren’t going to be perfect. Our message to those guys was, ‘You give up a completion, bounce right back and compete the next play,’ and I thought those guys did a good job with that, but we put a lot of pressure on those guys to make those plays.

I think the other thing with blitz is, it’s never just one guy. It’s everybody doing their job within the scheme. All 11 guys need to execute or you can look bad in blitz, whether it’s a physical mistake or a mental mistake.

Wilson was blitzed 14 times out of 31 pass plays, which is unlike for Schwartz to blitz so many times, but the formula is working right now. The Eagles haven’t allowed an opponent to score more than 17 points since Week 7.

The Dolphins are averaging a league-worst 3.1 yards per carry and are challenging the franchise record for the worst mark at 3.12 set in 1997.

Miami traded Kenyan Drake earlier in the season and released their best back on the roster in Mark Walton a few weeks ago after another run-in with the law. Kalen Ballage, the starter on the depth chart, is mustering just 1.9 yards per tote.

The Eagles have one of the best run defenses in the league, I’d expect Fitzpatrick to throw it a TON!

PREDICTION: The Eagles have to be careful here because the Dolphins are playing better football as of late and might give the Birds more trouble on Sunday than either the Giants or Redskins do. With that being said, I don’t think we see a letdown.