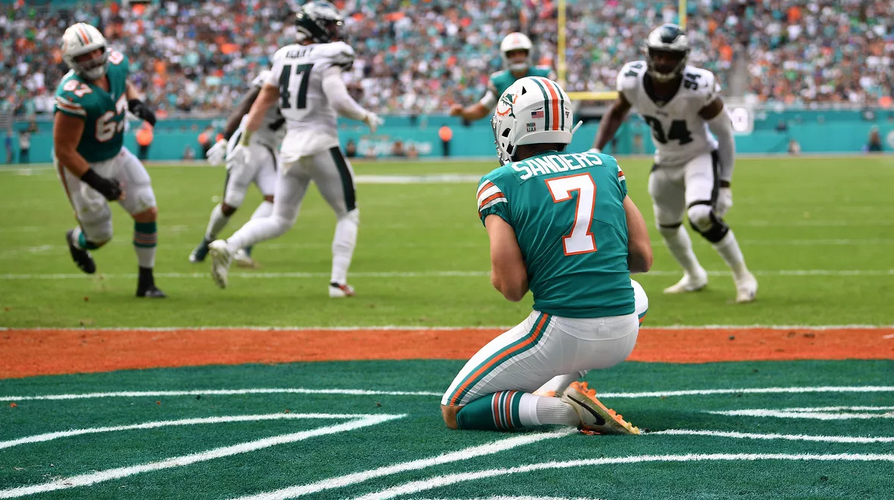 Not only did the Philadelphia Eagles lose to the Miami Dolphins, they blew a 14-point lead to them in the process.

But because of the ineptitude of the NFC East, the Eagles still somehow and miraculously have a chance to win the division because they are still just a game behind the Dallas Cowboys. Philly hosts Dallas in Week 16 and can win the NFC East if it wins out — possible considering the Eagles’ other three games are against the Washington Redskins and New York Giants twice. Then again, with a loss against a now-3-9 Dolphins team, nothing is assured at this point.

Fitzpatrick, who was 27-of-39 for 365 yards with an interceptions, led Miami to five straight touchdown drives at one point, including six straight scoring series. His favorite target DeVante Parker hauled in seven receptions for 159 yards and two scores.

The Eagles did sack Fitzpatrick three times and the pressure was relentless in the first half, but as it went on, Fitzpatrick was able to get to the top of his drop without getting hit consistently. Fitzpatrick moved to 4-0 in his career against Jim Schwartz defenses and has recorded a 106.1 passer rating in those four contests.

I talked about it in my preview coming in, the Eagles’ biggest Kryptonite defensively are against quarterbacks who get the ball out quickly.

That’s exactly what Fitzpatrick did on Sunday.

It was a trio of fourth-down conversions that turned out to be the difference in the game. Parker came down with a 43-yard touchdown catch to get the Dolphins on the board late in the opening frame. He snatched a back-shoulder ball at its apex with Ronald Darby draped all over him, kept his balance and maintained it along the left sideline before making it into the end zone.

Then there was this. A fake field goal where they punter Matt Hack took the snap and pitched a pass to punter Jason Sanders for a touchdown, giving the Dolphins a 14-13 lead at the 4:40 mark of the second quarter.

The third fourth down came in the final frame, but we’ll come back to that because even after all of the chicanery, it was Philadelphia which built its lead back up to 14, 28-14, following its opening march of the third quarter. The Eagles used a 12-play, 75-yard trek to put another touchdown on the board seconds before the half with Carson Wentz being flushed to his right on a 3rd-and-goal and finding J.J. Arcega-Whiteside for a 15-yard score. Alshon Jeffery’s 10-yard TD catch made it 28-14.

But the Eagles mustered just three more points the rest of the way and the defense couldn’t get a stop. Three more touchdown drives from the Dolphins followed, but a drop by Zach Ertz and a subsequent missed field goal by Jake Elliott were costly as well.

Little things have plagued the Eagles all season long, little things continue to get the best of them.