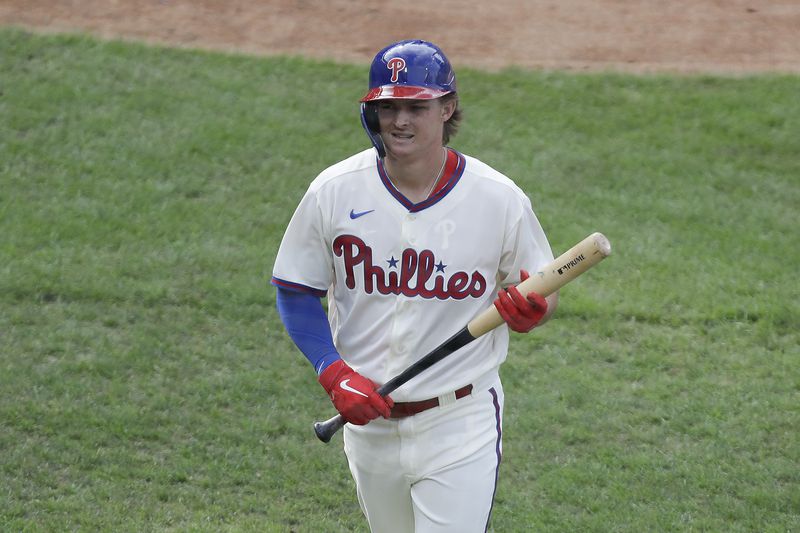 Pardon my French, the Phillies center field situation is an absolute shitshow.

That felt good. Can’t think of a better way to rip off the proverbial Band-Aid.

It started in spring training. There were plenty of options for center field on the roster: Adam Haseley, Roman Quinn, Odúbel Herrera, Scott Kingery, and Mickey Moniak. The unfortunate fact of the matter is nobody stepped up and seized control of the starting position, leaving manager Joe Girardi to decide on a platoon of Haseley and Quinn.

This decision was short-lived as Quinn had one hit in 23 at-bats, while Haseley stepped away from the team for personal reasons. Moniak was called up in his absence and, well, you can guess how the 22-year-old who hardly played double-digit games is doing so far.

Mickey Moniak has struck out in seven of his first 11 plate appearances. Phillies haven’t had a hit from a center fielder in 10 days.

It seems the team is at an impasse, stuck between a rock and a hard place with the center field situation. On one hand, you have the former No. 1 overall pick on the roster getting at-bats every day, but on the other hand, he really isn’t doing much of anything besides playing good defense.

Mickey Moniak lost sight of this flyball before coming in to make a crazy diving catch! pic.twitter.com/hVlWCxHWRw

On the other, other hand, you have Herrera and Kingery at the alternate site, who both can play the position, but each have their flaws. Kingery can’t hit his way out of a paper bag right now and Herrera comes with off-the-field baggage and a streaky bat.

We’re too early in the season, with too obvious a need for a trade. At best, the front office could strike up a deal in the late spring, early summer for a replacement, but 20 days into the season? That’s almost unheard of.

This leaves the team with one logical solution, in my opinion: keep starting their 2016 No. 1 overall pick.

Why? Because Moniak is 22 years old and finally seeing Major League pitching on a consistent basis for the first time. He just cracked double-digit MLB games, which is hard to believe since he’s been in the Phillies’ system for almost five years at this point. Why cut his legs out from under him when there’s no slam-dunk upgrade that can be made in the immediate that will take this team to the next level? It’s not like Moniak is in the way of a Ronald Acuña Jr. or Juan Soto type player who can step in and become the face of baseball. [Could you imagine if the Phillies drafted well enough to land those types of players?]

Off-field issues aside, I wouldn’t take a five-year veteran who last slashed .222/.288/.341/.629 over a 22-year-old who’s seeing his first action in the majors. Not at this point, anyway. The Moniak Experiment needs to continue. The Phillies need to see what they have in him. If he plays well, great! A homegrown guy panned out and he can be a cornerstone of the team for years to come. If he flashes, also great! He has something to build on, and can compete for a starting job next season when left field opens up and center field still has a massive question mark, or he can be thrown in as a trade chip later in the season. Because who wouldn’t want to take a flier on a former first overall pick?

If he’s bad, then we’re screwed. They’ll be taking pennies on the dollar in a trade, or he’ll waste away in the farm system like many other Phillies prospects have. Looking at you, Dom Brown.

At any rate, the answer has to be Moniak, at least for now. While Dave Dombrowski made some good moves this past off-season, the team is currently in this position because he did not address a huge need and decided to roll with what they have in the farm system.

Nonetheless, give Moniak some time and pray to whatever higher power you believe in that he can figure out Major League pitching and contribute to our Fightin’ Phils.