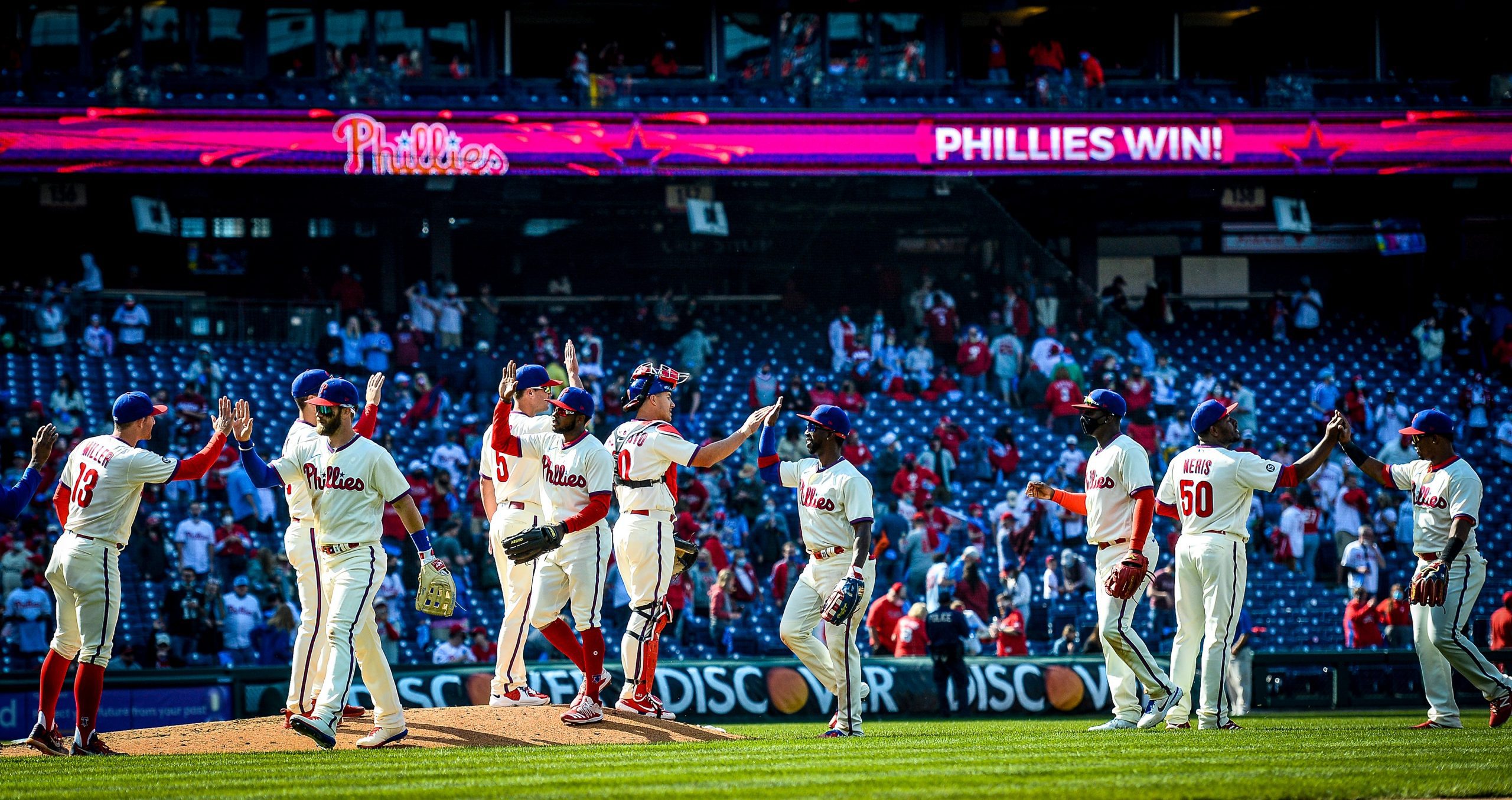 After what seemed like forever, Major League Baseball is back! The Phillies swept the Braves in an impressive opening series. The Men’s and Women’s Final Fours started over the weekend. Gonzaga and UCLA put on a thriller.  Jalen Hurts will be wearing a new number to start the season. All this and so much more in this week’s Brew. Let’s get to it!

And it feels so good

Break out the Brooms!

Scott Franzke with the call on the walkoff winner

Didi Gregorius had a spectacular catch

Didi Gregorius with the chest catch!!

Zack Wheeler was fantastic on Saturday

Miguel Cabrera has departed the field of play via the BIG FLY.#DetroitRoots pic.twitter.com/aQebyTB7eJ

Miguel Cabrera is the 3rd player to hit 350 HR with the @tigers organization.

Benches cleared on Saturday during the Reds-Cardinals game

Benches have cleared in the Reds-Cardinals game.

Fernando Tatis Jr. blasted his first of what I’m sure will be many dingers this year

There were MVP chants too. pic.twitter.com/TaPAAOl9VN

Gonzaga will face Baylor for the title on Monday Night

GONZAGA VS. BAYLOR FOR THE CHAMPIONSHIP pic.twitter.com/0KTVlYqczV

Was that a better game and finish than this one in 2016?

Or who could forget Duke vs Kentucky from Philly in 1992?

Back to the Zags & UCLA… this headline says it all

Sometimes the copy editors who write our headlines are exceptional. Other times, as in today, they are even better than that. pic.twitter.com/CGkgU9VHip

BAYLOR IS GOING TO THE NATTY! 🐻🏆 pic.twitter.com/WZl7tEEFJo

The final field goal of the game cashed the over.

Houston had no answer for Baylor

Houston looking for an answer to stop Baylor rn 😅 pic.twitter.com/Z6j0DFJY3u

With Stanford and Arizona set to meet, it will mark the first women’s national championship game featuring two schools west of the Mississippi River since 1986, when Texas defeated USC.

The Champs are here

It came down to this

The way that Lexie Hull (guarding the inbounder) knows where Aari McDonald is heading behind her to slide and deny the initially open inbound disrupts the whole final play.

Of course, Stanford then defended McDonald incredibly from there, too. #WFinalFour pic.twitter.com/47wQGhswcI

South Carolina’s season ended in the Final Four in heartbreak

This court-side view of the South Carolina and Stanford ending 😱

Arizona coach with the double finger and a “Fuck everybody” pic.twitter.com/vbN25V4ThX

Jalen Hurts will have a new number this year

Full list of Eagles players that will be wearing a new number in 2021, including QB1 Jalen Hurts.#FlyEaglesFly | @JackPConnell https://t.co/k2rmRBJ6P2

Huge news: Major League Baseball announces it will be moving the All-Star Game from Atlanta in response to the new voting laws passed by Georgia.

Meanwhile, the Braves seem to be missing the point

The Braves statement regarding the moving of the MLB All-Star Game: pic.twitter.com/0Iapm3eIre

And the Anti-Cancel Culture mob are of course being hypocrites

They can’t help themselves

Chair of the RNC: https://t.co/cw7hLQPFmc

My investigation into what happened:https://t.co/vu10yWJaEs

One of Former President Trump’s Fluffers wants to join Newsmaxx

Gaetz has told some of his allies he’s interested in becoming a media personality, and floated taking a role at Newsmax.

One of the sources said he has had early conversations with the network about what a position could look like.https://t.co/dhlyDgvkqU

Well well well… look at what we have here

“Sources said Gaetz was part of a group of young male lawmakers who created a “game” to score their female sexual conquests, which granted “points” for various targets such as interns, staffers or other female colleagues”
https://t.co/KJbD1eVMHn via @ABC

More about the Creep

The Post has fresh allegations that Gaetz showed people videos of naked women he had encounters with https://t.co/3j9XIDjJ9c

Matt Gaetz responded to news he’s under federal investigation by talking to Tucker Carlson. It was a disaster. https://t.co/JW1DQVgZni

This had to get the Curb Your Enthusiasm treatment

Tucker Carlson had Matt Gaetz on his show and Gaetz thanked him by dragging Carlson into his teen sex trafficking scandal.

This guy is straight delusional

Mike Lindell declares that as a result of voter fraud lawsuit he’ll soon be filing, “Donald Trump will be back in office in August.” pic.twitter.com/5Ewtd9SZ1O

DMX had a health scare

UPDATE: DMX has reportedly been taken off life support and is breathing on his own.https://t.co/O4qqKQSojR

The Canucks have a huge Covid problem on their hands

Via sources, here is the latest on the Canucks outbreak. Again, hockey is secondary.
There are 16 players and three coaches currently affected but that list is likely to grow.
More developments ⤵️@TSNHockey @TheAthletic pic.twitter.com/sAoh5ghJUc

Space Jam is back

Tunes vs. Goons. Watch LeBron James and Bugs Bunny in the new trailer for Space Jam: A New Legacy. In theaters and streaming on HBO Max* – July 16. #SpaceJamMovie pic.twitter.com/7KOEPJP06i

What in the Blue Hell is Serge Ibaka wearing?

With Governor DeSantis’ track record, what could go wrong?

Florida Gov. Ron DeSantis says crews are working to prevent the collapse of a large wastewater pond in the Tampa Bay area while evacuating the area to avoid a “catastrophic flood” (via @AP) https://t.co/JbfXKLQaz6