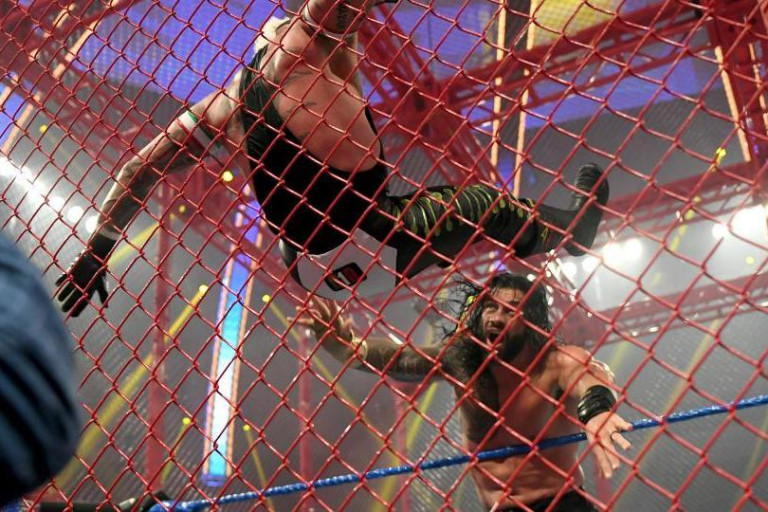 We’re back at it again, fresh off of Father’s day weekend. That familiar smell in the air is the scent of disappointment for Philly sports fans. The Sixers choked their series away against the Hawks. Ben Simmons forgot to put his big boy pants on and now some would even say that the process is dead. In other news,  the ugly red cell was back for the WWE Hell in a Cell Pay-Per-View and there were no major title changes at the event. So let’s get right to it. It’s Brew time.

76ers‘ Joel Embiid has been fined $35,000 by NBA for altercation with Hawks‘ John Collins in Game 6. Atlanta’s Bruno Fernando suspended one game for running onto court.

Jalen Hurts was in the building for the series finale

The @ATLHawks defeat Philadelphia 4-3 and advance to the #NBAECF presented by AT&T! #NBAPlayoffs #ThatsGame pic.twitter.com/g3J9ZYPVt4

How does that happen?

THE HAWKS ARE ECF BOUND ‼️

Trae Young and Atlanta take Game 7 from the Sixers. pic.twitter.com/1AmRvwgRK0

Yep.. we felt this

With a minimum of 70 attempts, Ben Simmons’ 34.2% free throw percentage this postseason is the worst in a postseason in NBA history. pic.twitter.com/G12fiDSXVN

Rivers on if he still believes Simmons can be a title winning point guard: “I don’t know the answer to that question right now.”

This sums it up

I see no lies

Seth Curry has the biggest balls on the @sixers everyone else is touch and go.#NBATwitter

I could keep going… pic.twitter.com/mZ3QqNVTy1

Imagine telling Sixers fans in the beginning of this season, the remaining teams that stand in your way for a title is the Bucks and the Suns or Clippers…first you just have to get through Kevin Huerter…

Bucks took down the Nets

MILWAUKEE IS MOVING ON 😤

The Bucks defeat the Nets in OT in Game 7 to clinch their spot in the Eastern Conference Finals! pic.twitter.com/zAlF52Tbmp

What a shot to force Overtime

“My big ass foot stepped on the line. I just seen the little screenshot, how close I was to ending they season off that shot, but it wasn’t in God’s plan.”

KD on his final shot in regulation: pic.twitter.com/7wnBEUkB8G

Maybe this is why the Nets lost

This why they lost. https://t.co/inzzV7t9DI

The Celtics are trading Kemba Walker, the No. 16 overall pick in the 2021 draft and a 2025 second-round draft pick to Oklahoma City for Al Horford, Moses Brown and a 2023 second-round pick, sources tell ESPN.

Man’s got Thor’s hammer for a leg tho 🇳🇴#DOOP pic.twitter.com/anR9tDCxZN

“The Goal of his Life Yet Again!” @DaveLenoTV with the call on Jakob Glesnes’ equalizer. pic.twitter.com/JeoUv3SreM

They couldn’t wait til the PPV

Bianca Belair not only won, but she hit this wicked move too

Bianca Belair with the KOD to Bayley onto a ladder! #hiac #hellinacell pic.twitter.com/oJdxWrwbUN

Alexa Bliss was on the right side of the win column

Throwback Hell in a Cells

Scenes from Mankind and @undertaker‘s unforgettable #HIAC Match at King of the Ring 1998.

Then there was the debut of Kane in 1997

Kane’s first ever debut, Hell In A Cell 1997 pic.twitter.com/gZXFAo3hJX

This was an amazing aerial shot

Awesome aerial shot of The Undertaker and Shawn Michaels during the first ever Hell In A Cell 📸 pic.twitter.com/wVyjbBHcEM

In honor of Father’s day

The new big lie from Republicans

Very good detailed breakdown by @MarshallCohen of the nonsense-filled The FBI Did It conspiracy theory about the Capitol riot, which went from a bad right-wing website to Tucker Carlson to Republican members of Congress. https://t.co/hGIKuEb1y2

This will never not be such a disgrace

Here’s my breakdown w/ @jessicadean of the new videos from the Capitol insurrection.

These videos are ugly. they are profane. they are difficult to watch. But they tell us the truth.

And this truth is currently getting washed away in a sea of lies and disinformation….. pic.twitter.com/14JfNfR8d2

The skies are not friendly to Matt Gaetz

Yes we can confirm this is us. We have been up in the skies of Florida all week flying these planes: Cokehead Matt Gaetz tried to drug test welfare recipients pic.twitter.com/NceHcZCDLw

It’s Father’s Day so we have this plane flying around Florida for Trump and Ron DeSantis pic.twitter.com/OyHMDS1UJa

But who really is the daddy?

Looks like DeSantis beat Trump in a straw poll…

Republican male politicians will stop at nothing to stay in power

Just an incredible scoop from ⁦⁦@MarcACaputo⁩

A federal judge wants every attorney whose name was on court filings seeking to overturn Michigan’s presidential election results in the “Kraken” suit there to show up for a sanctions hearing on July 6. pic.twitter.com/816zUMHZ4l

They’re just now figuring it out that Don is a Con?

“”So basically the August thing is a bunch of bull…”https://t.co/a0Y17pwD6B

This says it all

The Proud Boys are as embarrassing as it gets

Proud Boy in Oregon loses his shit and assaults a veteran over a peaceful signpic.twitter.com/kpfLPvqHmM

Opinion | I Am Breaking My Silence About the Baseball Player Who Raped Me – The New York Times https://t.co/V3EntopthB

These scumbags need to be caught

WAITRESS ABDUCTED: Police in South Jersey are searching for multiple suspects wanted in connection with the abduction and assault of a waitress Saturday night. https://t.co/icRj4oKL3a

Who could forget this moment?

In the 1992 Olympics, Derek Redmond tore his hamstring in the 400m semifinal.

His father, Jim, ran onto the track to help him finish the race ❤️

Sang Ho Baek recently completed his sophomore season with the George Mason baseball team where he appeared in seven games for the Patriots and made his collegiate debut against UMBC.https://t.co/zEIOgorPZF

Qatar will require 2022 World Cup attendees to be vaccinated against coronavirus https://t.co/HfqaoqmVsc pic.twitter.com/Qe7vKHfBwW

A star is born

So many emotions from Sha’Carri Richardson after her win tonight.

BRAH! Sha’Carri Richardson just toying with everyone out there 😂🤣.

And the point at the end. She not playing. pic.twitter.com/Cvi1SnlXge

I have some questions here

Today was the day.

Remember where you were, relish fans. pic.twitter.com/4LL08BowOt

Joey got to meet his biggest fan, Abigail. ❤️ pic.twitter.com/S6GySOo6BK

The Rays announce that baseball’s top prospect will be called up on Tuesday. 👀 pic.twitter.com/X4PhOepG8N

A moment Wander will never forget

The moment Wander found out he was heading to the show

The 15 minutes of fame are not up yet

In Phoenix, this behavior is somehow glorified