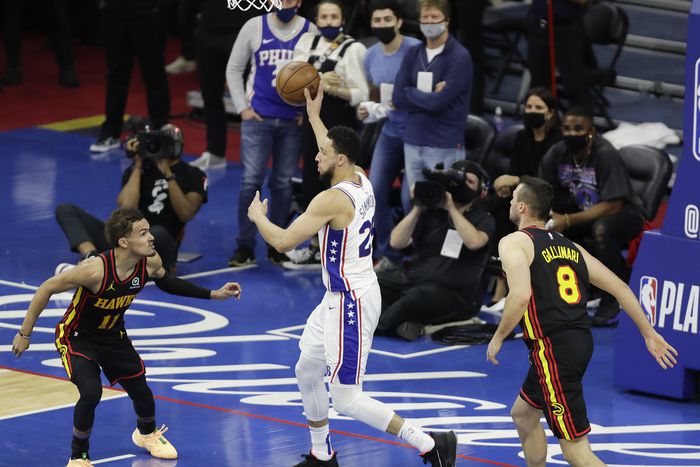 The Sixers’ season is over. The season ended in disappointing fashion… again. With Milwaukee knocking out Brooklyn, it appeared for a second that the Sixers had a great path at least to make it to the NBA Finals. But then reality struck. The Sixers failed to take care of business and were eliminated in the second round of the playoffs by the Hawks. Yes… the Atlanta Hawks. Yikes! From some poor coaching decisions from Doc Rivers to cold shooting by the team in the second half of a couple games to one of the team’s stars pulling a disappearing act in the Series – the Sixers just couldn’t get the job done.

Let’s take a look at Ben Simmons, though. By now we’ve all seen the footage. When the lights were bright on the grand stage, Simmons choked and became stage fright. It’s one thing to try and fail. It’s another thing to be petrified of the moment like Simmons was. As if the poor performances throughout the Hawks series weren’t bad enough, when all eyes were on Simmons in Game 7, he did this:

This sums up Ben Simmons unfortunately 💩

Passed on layup/dunk. Thybulle goes on to make just 1 of his 2 free throws in crunch time.

In a Game 7 with a Conference Final on the line. The Sixers may not take next step with Ben around, sadly.#NBA #NBAplayoffs

Let’s see a replay of that…

Oh wait, that wasn’t a replay – it was just the mockery that all of this has become. Unfortunately, that play may go down as the play that Simmons will be known for in Philadelphia sports history. Now, we all know how this ends. Simmons will likely get traded somewhere and go onto eventually win a NBA Championship, and the Sixers will somehow bungle the Embiid years and fail to take home a title because that’s just what happens in this city. It’s almost as if part of the suffering is part of the baptism in becoming a Philly sports fan. But… this many times? With that being said, there’s no way that Simmons can be brought back to Philly for another season, right?

The Sixers’ head coach was asked if Simmons could be a PG on a championship team. His response:

“I don’t know the answer to that right now.”

-Doc Rivers after being asked if Ben Simmons could be a point guard on a championship team. pic.twitter.com/rw51V7rkRE

Darryl Morey at his press conference was asked about Simmons shooting more and improving his performance in the pressure of the moment. Morey replied:

Daryl Morey was asked how the #Sixers can get Ben Simmons to shoot more and improve his free throw shooting during the pressure moment of the playoffs. pic.twitter.com/bUnvf1tNps

So, what does this all mean? Absolutely nothing. As we all know, anything can happen and what we heard from Morey and Rivers were just words. The fact of the matter is as we all saw, this Sixers team is not good enough to win a championship as currently constructed with Simmons on the team. There was no reason for the Hawks to even take the Sixers to a Game 7, let alone beat them. I mean, Simmons played 34 minutes in the fourth quarter of Games 4-7 (in which the Sixers lost three of the four games). He had zero field goal attempts in those 34 minutes. I’m not saying Simmons is the only reason the Sixers lost the series, because he’s not – but when you have a “star” player that folds like an accordion, it just can’t be tolerated. The team shouldn’t tolerate it and the city shouldn’t tolerate it.

At this point though, what return value would Simmons bring in a trade? Kevin O’Connor of The Ringer thinks that a Ben Simmons to Portland for CJ McCollum deal is fair and may work for both teams. O’Connor states:

Consider Portland. McCollum for Simmons as the main piece in a Blazers-Sixers deal is what executives around the league, just like fans, think is a reasonable trade that makes sense for both sides. Simmons could be like a supercharged Draymond Green to Damian Lillard’s Steph Curry. For years, the Warriors have shredded teams because Curry would often draw a trap and pass the ball to Draymond, who could get to the rim or make a clutch pass to a teammate. Simmons would thrive in a role like that since Lillard feels the same type of pressure in the pick-and-roll.

McCollum, in turn, would help the Sixers. Any player who can create their own shot at a high level would. But it’s not a no-brainer deal. McCollum is 29, and he has underperformed in past postseasons. A backcourt of McCollum and Seth Curry would also make for a weak defensive duo. Blazers fans have just about had it with McCollum, just as Sixers fans have with Simmons. But they could each drag their problems to a new team too.

There’s also these hypothetical trades that are floating around the internet.

I don’t know about you, but if I could get Zach Lavine for Simmons straight up, or Brogdon and Warren for Simmons, I would do those deals in a heartbeat. I’m just not sure that the other teams would. What I do know, though, is that Simmons’ game has not changed over the years, and I’m not expecting it to miraculously change over the summer. A change of scenery is needed for both Simmons and the Sixers, the latter of which needs to bring in a PG with fire in his eyes. A PG that takes it to the rack like their life depends on it when when they see an opening to the rim. The Sixers need to make this right, and I have all the faith in the world in the Sixers’ president.

In Morey we trust.