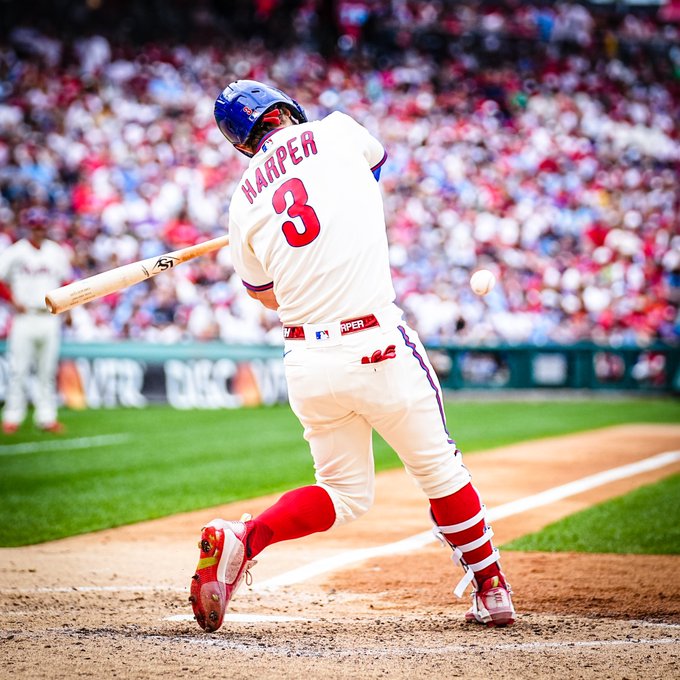 It’s a new week and we’re back at it again. It was a tremendous weekend for the first-place Phillies. Yes – you heard right; first place. NBA free agency kicked off last week and while the Lakers are bringing in all the help in the world for LeBron James, the Sixers have made some minor moves – including a rather shocking pick up with Joel Embiid’s enemy Andre Drummond. New York hip hop was represented at the Verzuz battle between The Lox and Dipset. We have a lot to cover, so let’s get to it, it’s Brew time.

Today’s for you, 34. ❤️️ pic.twitter.com/uHpPnAiO1P

34 would be proud. #RingTheBell pic.twitter.com/BSNWpk2PuI

This is amazing: Zack Wheeler today was the first Phillies pitcher to retire 22 consecutive batters in a start since May 29, 2010 — Roy Halladay’s perfect game.

Look at that Bomb

Franzke on the final out… need this in October#RingTheBell pic.twitter.com/E82WMNTSM1

It’s gotten so bad for Mets fans they’ve resorted to fighting each other pic.twitter.com/gBz223CrgN

Andre Drummond to the home team

No options on the two-year, $20M deal that will keep Danny Green with the 76ers, his agent Raymond Brothers of @RocNationSports tells ESPN.

Furkan is back with Philadelphia

In a quiet Sixers free agency, Furkan Korkmaz — and his odds of breaking out — deserve a deeper look after his new deal https://t.co/tLJvfzLnoF

Dwight Howard is heading back to LA

76ers have added Phil Beckner as a coaching consultant, the team confirmed. Beckner, hired in July, is expected to assist the coaching staff in several areas.

Beckner is a former Weber State assistant coach and the longtime trainer for Damian Lillard.

On the Miami Heat, reloading again with Kyle Lowry and P.J. Tucker — how they keep doing this, and what they look like for next season: https://t.co/7Fm8AW1s97

Carmelo Anthony to the Lakers

Breaking: Lonzo Ball is landing on a four-year, $85 million contract with the Chicago Bulls in a sign-and-trade agreement, his agent and Klutch Sports CEO Rich Paul tells @wojespn. pic.twitter.com/8fdrLpl9yz

The Bulls aren’t playing around

DeMar DeRozan and the Bulls are closing in on a three-year, $85 million-plus deal, per @ShamsCharania pic.twitter.com/ZIdAyLv6jy

Chris Paul is running it back with the Suns

Run it back ☀️ pic.twitter.com/wOjynkMBXV

ESPN story on Steph Curry agreeing on a four-year, $215M contract extension with the Warriors: https://t.co/02D9mpkbuQ

John Collins is back with Atlanta

Kemba Walker is finalizing a contract buyout with the Thunder and the New York Knicks will sign the four-time NBA All-Star as a free agent, sources tell @TheAthletic @Stadium.

But somehow LeBron’s teams never get investigated for tampering

Sign-and-trade deals between the Bulls and Pelicans for Lonzo Ball, and the Heat and Raptors for Kyle Lowry are under NBA investigation for possible tampering violations, sources told @wojespn and @ramonashelburne. https://t.co/YJeeaoz1Pe

This story is hilarious

Allen Iverson tells a hilarious story about smoking hash with Biggie and not being able to feel his feet 🤣pic.twitter.com/ZTXeCKyZnq

Republicans never do this when it comes to their own

Cuomo Is Losing Allies Quickly, But Shows No Sign Of Resigning—Here’s What Could Happen Next https://t.co/CKk5Aegaa6 pic.twitter.com/cVHp1qbwjW

What is Don the Con hiding?

Just in: Trump’s attorneys are trying to forever block the release of his tax returns after DOJ said Treasury must relinquish them to Congress, again arguing that the congressional request is rooted solely in desire for political gain. https://t.co/bqUQtZZy7l

MAGA is threatening to do it again…

MAGA rally organizer Matt Braynard just announced on Bannon’s show that he has many “high profile speakers, including Members of Congress,” on Sept 18 to “push back on the narrative” that Jan 6 was an insurrection. “It’s going to be huge .. we are going back to the Capitol.” pic.twitter.com/meuFEZ7C7l

They can’t even get the spelling right

Tucker Carlson is in Hungary this week meeting with their authoritarian leader. This cannot be ignored.https://t.co/GGDdFcBGr0

Murdoch is quietly scrubbing incriminating Covid-19 misinformation videos from websites ahead of a grilling by the Senate on Friday. Dozens of videos have vanished with no correction or apology for spreading dangerous lies. But don’t worry; we have copies. #MurdochRoyalCommission pic.twitter.com/4oYXB4mV3t

This isn’t church, this a cult

Just a normal Sunday at Global Vision Bible Church as right-wing pastor Greg Locke literally screams at his congregation “do not get vaccinated” while saying that only “crack-smoking, demon-possessed leftists” think Biden is the legitimate president. pic.twitter.com/humGnQnBoC

My favorite part of the #verzuz .. talk yo shyt JASON!! pic.twitter.com/Qyn53n8WJB

When all was said and done

WHO MADE THIS?! 😩 #VERZUZ #JADAKISS pic.twitter.com/84eSErWI1G

Fans react to Dipset and The LOX’s ‘Verzuz’ battle: https://t.co/BEPngb1QfG

Fat Joe’s recap of The Lox and Dipset #VERZUZ is too much 😭🤣pic.twitter.com/2Vib7AgnuK

I had 2 hop on this 1… strictly business with legends EpMd & the legendary @Nas … get tha bozack! https://t.co/qdCl90n4wv pic.twitter.com/b79zuxwec0

A Frontier flight from Philly to Miami had a disruption

Shout out to Yelp

Yelp is now adding some businesses’ COVID vaccine information to their listings. https://t.co/siL6X2kMvM

Anti-vaxxers protest the vaccine outside a hospital in Texas while we average over 100,000 new COVID-19 cases a daypic.twitter.com/CwI737gMHX

The National Wrestling Alliance is Saddened to hear about the passing of the legendary ‘Beautiful’ Bobby Eaton.

We send our love to his friends and family.

His impact & legacy will always be remembered. #NWAFam pic.twitter.com/8jaqErv2bc

This entrance theme was amazing

This throw by Aaron Rodgers at Packers training camp was INSANE. 🎯🔥