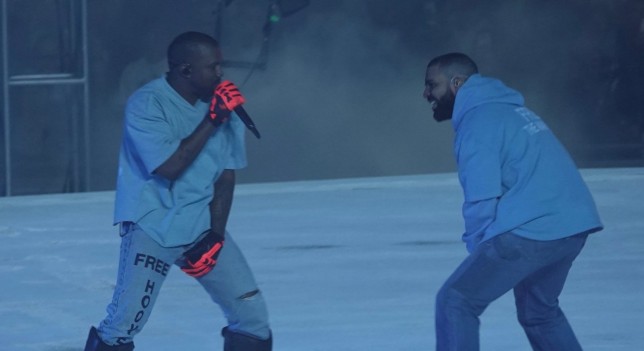 We’re back at it with an all new Brew. Our beloved Eagles are on a bye week. Kanye West and Drake squashed their beef to perform together at a benefit concert for a convicted murderer. The Army/Navy game took place this weekend at MetLife stadium. Rutgers basketball got a huge win. Tom Brady keeps on proving that he’s the G.O.A.T. We have this and so much more to get to, so let’s do this. It’s Brew time.

Well this is a kick to the groin

Damian Lillard would like to play with three-time All-Star Ben Simmons, sources tell @ShamsCharania and @sam_amick.

Under Neil Olshey, the Trail Blazers discussed the framework of a trade for Simmons.

But other deals may be brewing

Not in our house

Matisse Thybulle wanted to prevent Steph Curry from making history on his watch. With help from his teammates, who he credited as the real key to his success, he carved out a small piece of his own: https://t.co/jfPanjzF3w

The Flyers have fired their head coach

Rutgers takes down number one Purdue

Sad news from the NFL

We are devastated and completely heartbroken.

Demaryius’ humility, warmth, kindness and infectious smile will always be remembered by those who knew him and loved him. pic.twitter.com/0GLZIr6UP3

The Walter Payton NFL Man of the Year Award

The Walter Payton NFL Man of the Year Award presented by @Nationwide honors players who have exhibited excellence on-the-field, and whose passion to impact lives extends beyond the game. #ItTakesAllOfUs to make a difference. See the nominees here: https://t.co/R9P2JLXGBm #WPMOY pic.twitter.com/aMOBKbY0Tg

TOM BRADY TO BRESHAD PERRIMAN FOR THE WALK-OFF WIN 🔥

The mission for Army

For those watching, the Army-Navy Game serves as a tribute to all of those who serve our country.

For those playing, it serves as the origin for a lifetime of memories. pic.twitter.com/nqUpj2oZGS

Plz don’t do this 😅 pic.twitter.com/fTGMKj7vIR

Not a bad view

Not a bad scene for my first Army Navy game. Wow. Unreal!!! pic.twitter.com/nqW593W6d3

Navy wins a close one

NAVY FOR THE WIN 🔥

Kanye West and Drake on stage together

It appears to be all love between the two

Drake dancing and singing along while Ye performed “All Falls Down” tonight. pic.twitter.com/RiieVdpFSp

Drake was rehearsing “24” by Kanye West at the LA Coliseum last night 👀 pic.twitter.com/GerOQJ005q

Does Krasner owe an apology?

Mayor Nutter: “I have to wonder what kind of messed up world of white wokeness Krasner is living in to have so little regard for human lives lost, many of them Black and brown, while he advances his own national profile as a progressive district attorney.”https://t.co/ML3c9wkSP6

Subpoenas for the Don the Con

Republican politicians want you to die

Listerine has explicitly stated that no research data proves that its mouthwash prevents or treats COVID-19. https://t.co/oH3LkpxXEk

These people make me sick

Latest: Trump White House chief Mark Meadows turned over to Jan. 6 committee an email that referred to a PowerPoint calling for Trump to declare a NatSec emergency and have VP Pence delay Biden’s certification pic.twitter.com/D2wgLS6AoD

This section stands out. Cmte wants to know about Jan 5 Meadows email about getting Natl Guard to “protect Pro-Trump people” https://t.co/dpfHeQLavS pic.twitter.com/jCcy9WzMPW

“Do you need something from me?”

Trump called the Taliban. “According to an official who listened to the exchange, Trump told him, ‘You guys are tough fighters.’ Then Trump asked, ‘Do you need something from me?”https://t.co/qEAifXM2gk via @NewYorker

In other Kanye West news

We’re thrilled to welcome Chris Wallace to CNN as an anchor for @CNNPlus. His new weekday show will feature interviews with newsmakers across politics, business, sports and culture & will contribute to CNN+’s slate of live programming available at launch. https://t.co/6dgFzBd2QT pic.twitter.com/h8djkxClsB

Ah, so she doesn’t understand satire either. There enlies the problem. https://t.co/pyjZPYDnVV

Gavin Newsom is playing the game

If that’s the precedent then we’ll let Californians sue those who put ghost guns and assault weapons on our streets.

If TX can ban abortion and endanger lives, CA can ban deadly weapons of war and save lives. https://t.co/N5Iur9PEUZ

Fentanyl is no joke

Democratic Rep. Ted Deutch and his sister-in-law Dr. Beth Weinstock, whose son Eli Weinstock died from a fentanyl overdose, are pushing for Congress to act on drugs laced with fentanyl.

“We’re making sure that people understand that this is an emergency,” Deutch said. pic.twitter.com/R3UqkYzE0q

This is a terrible way to be laid off

Imagine this: You’re on a Zoom call with 899 of your co-workers. Then the CEO logs on to tell you that you’ve all been laid off, effective immediately.

The shenanigans have already started for Jake Paul’s next fight

Tommy Fury has pulled out of the fight due to a “medical condition” and Tyron Woodley is stepping in for December 18th for the official rematch. pic.twitter.com/t1OFVQQBBt

So you’re saying this doesn’t just happen in Philly????

The homeless are banned from Popeyes

Josh Duggar was just found guilty by a jury in his child pornography trial. https://t.co/7IreMJKxjj

The “Gay Tupac” as he calls himself has been convicted

The next phases of the case of former “Empire” actor Jussie Smollett, found guilty on five counts of felony disorderly conduct for making false reports to police, will address his potential punishment and opportunity to appeal https://t.co/Z7luIhChz9

All is right in Atlantic City again

Let’s check in on Harrahs Atlantic City (video from a friend)…. pic.twitter.com/Wj3pVyEjVN

JUST IN: Medina Spirit, the 2021 Kentucky Derby-winning horse trained by Bob Baffert, collapsed and died during a workout in California. https://t.co/Y6KiblAzvW

Look at the determination here

This is amazing. Snead’s teammates acted like children and he was like the parent going behind them cleaning up their messes. Jamal Shead seems like a great young man. https://t.co/JvRupJAPzj

Jeff Hardy has been released by WWE

The Beast in overalls

The artist formerly known as Braun Stroman is here

The Titan @Adamscherr99 at #FinalBattle 😤

The moment NYCFC took the lead in MLS Cup 🎉

Winnipeg goes back to back

Pat McAfee is getting bank

The retired NFL punter Pat McAfee has struck a sponsorship deal worth up to $120 million with FanDuel Sportsbook for his sports-based YouTube channel and SiriusXM talk show. pic.twitter.com/oa1yDtUbAO

How not to dunk a basketball