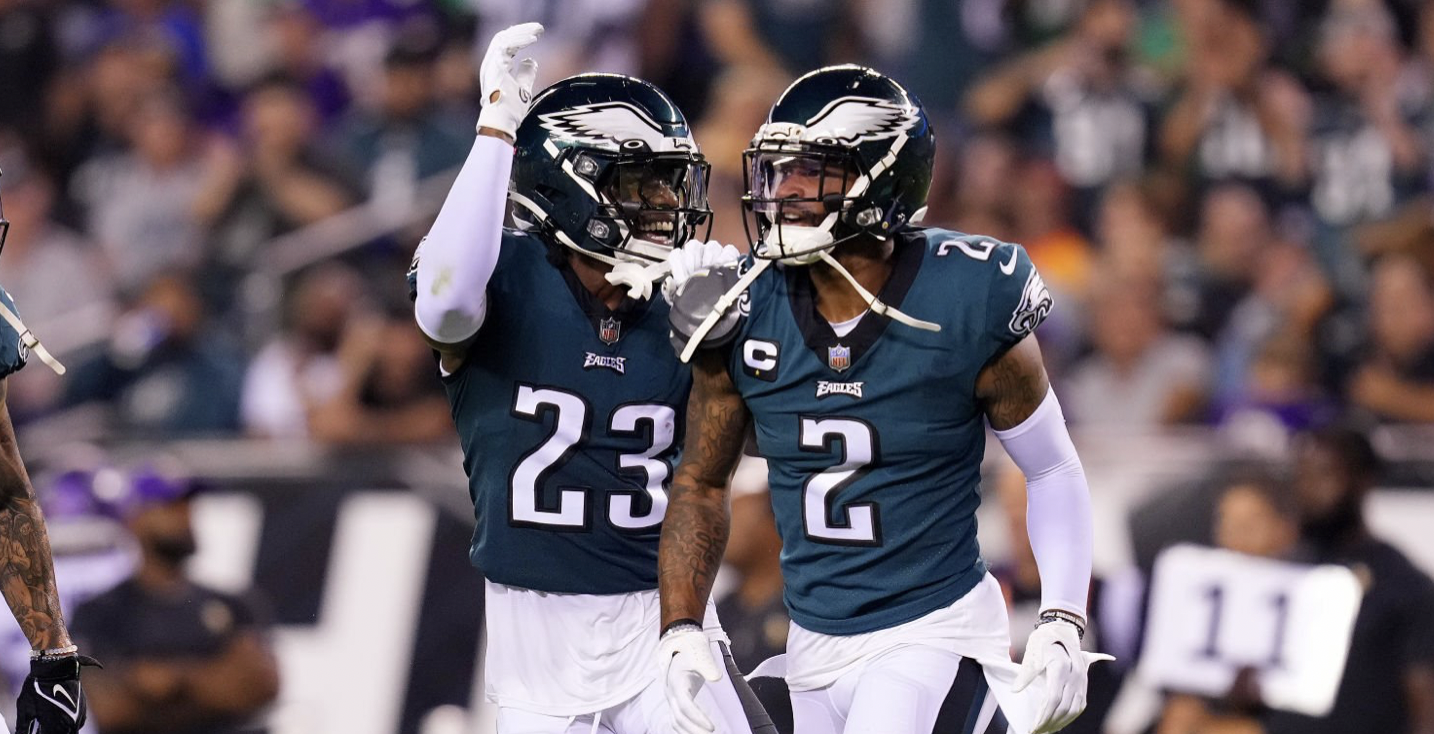 The Philadelphia Eagles were expected to struggle with the Minnesota Vikings’ dynamic offense on Monday night at Lincoln Financial Field, but Jonathan Gannon’s defense rose to the occasion to propel the hosts to a Week 2 victory.

Darius Slay and Avonte Maddox both recorded interceptions while the Eagles defense held the Vikings to — yards of offense in a 24-7 win. Eagles quarterback Jalen Hurts totaled 390 yards (333 passing) and three touchdowns, Dallas Goedert and DeVonta Smith both registered over 80 yards apiece, and the team rushed for 163 yards in a strong overall performance.

“We just wanted to come out here tonight and play our type of football,” Hurts said in ABC’s broadcast. “In the second half we could’ve done a lot better, Slay made a lot of players, our defense did a great job tonight. Our preparation all week was excellent, but now it’s about finishing games the right way. I still don’t think we have reached our potential yet.”

It was a fast start for the Eagles, who needed only 5:51 to take an early lead at home. Jalen Hurts’ orchestrated an 11-play, 82-yard drive on the opening possession for the Eagles, rushing in from three-yards out to give Nick Sirianni’s squad a 7-0 lead.

After the Eagles defense allowed only 10 yards on the Vikings’ opening two offensive drives, Hurts and the Eagles offense were at it again. Hurts connected downfield with wide receiver Quez Watkins, watching as the third-year man raced into the end zone from 53-yards out.

No better way to open the quarter!@JalenHurts ➡️ @Mronesx_ 53 yard 💣

Minnesota answered with a nine-play, 75-yard drive of their own to cut the deficit to 14-7. Kirk Cousins connected with tight end Ish Smith Jr. for a two-yard touchdown, giving Kevin O’Connell’s side their first points of the night.

With minimal time left in the second quarter, the Eagles successfully scored on their third drive of over 80-yards or more. Back-to-back catches from DeVonta Smith eventually led to Hurts calling his own number for his third touchdown of the night, scampering home from 26-yards.

Philadelphia’s defensive dominance continued in the third quarter with Darius Slay intercepting Cousins inside the 25-yard line. Slay jumped in front of Justin Jefferson and delivered the first defensive turnover of the game.

Jake Elliott’s field goal attempt later in the quarter was blocked by Patrick Peterson, but the Vikings could not take advantage of the good field position. Avonte Maddox rose high to intercept Cousins, continuing a dismal night for the veteran quarterback.

The Eagles would continue to frustrate Cousins and the Vikings offense for the remainder of the game, walking away with a statement win on home turf. Slay added his second interception late in the fourth quarter, denying Jefferson a touchdown catch in the end zone.

Even with one late opportunity to score a consolation touchdown, the Eagles defense did not let down, sacking Cousins on the final play of the game.

It was Philadelphia’s first head-to-head win over the Vikings since the 2018 NFL Playoffs, and a first regular season win since 2016. The Eagles next travel to Fedex Field on Sunday for an NFC East showdown with the Washington Commanders.