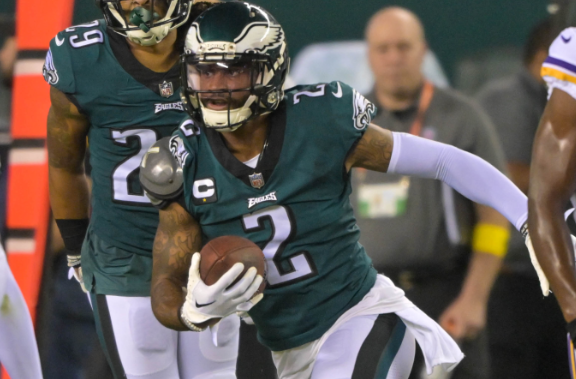 There was early season pressure on Philadelphia Eagles defensive coordinator Jonathan Gannon after his defense allowed 35 points in Week 1 to the Detroit Lions, but the veteran head coach made sure to set his team up for success in Monday’s dominating performance at Lincoln Financial Field.

Gannon watched as the Eagles intercepted Vikings quarterback Kirk Cousins three times in a 24-7 victory, boosting Nick Sirianni’s squad to 2-0 in the early stages of the 2022 NFL season. Not only did Gannon’s defense force three turnovers, they limited star wide receiver Justin Jefferson to only 48 receiving yards on six receptions and running back Dalvin Cook to 17 rushing yards, keeping the Week 1 standout under wraps for majority of Monday’s win.

The Eagles also fed off the energy from the home fans at the Linc, making Monday’s performance for the ages against a team that had recent success against them (winning the prior two head-to-head meetings).

“It felt great out there, it really did,” said defensive tackle Fletcher Cox, who had three total tackles, a quarterback sack, and a forced fumble. “It was electric. The crowd was awesome. You could feel the electricity and, man, we just came out flying around on offense and on defense.”

“We knew we had to rally to the football on every play and we had to be sound in our assignments,” linebacker T.J. Edwards said. “I think that’s what we did. We were solid. It’s something to build on.”

The Eagles excelled offensively, scoring points on four drives of 70+ yards or more, and watching quarterback Jalen Hurts total 390 yards and three touchdowns himself. However, the defensive was the big take away from Monday’s home victory, rising to the occasion against a veteran QB like Cousins and keeping one of the league’s best 1-2 wide receiver combo’s frustrated for 60 minutes of football.

The Vikings struggled on third down, successfully advancing on 4-of-12 opportunities, while only averaging 4.5 yards per play. Darius Slay made two big-time interceptions for the Eagles, and easily could’ve walked away with a few more, finishing the game with four pass break-ups. Slay remained a key figure on the squad coming into 2022 and praised Gannon’s game plan coming into a tough Week 2 match-up.

“You know how it always goes – the older you get, the more they think you’re falling of,” Slay said. “But I ain’t one of them guys. I’m still at an elite level. I deserve a lot of respect in this league.

“We had our minds set to go out here and dominate and play this game with a lot of effort and with a lot of talent,” added Slay. “Guys were out there executing their job. That is what we do. Coach [Defensive Coordinator Jonathan Gannon] put us in a great position to win.”

The Eagles moved to 2-0 with the victory, setting up an intriguing Week 3 road trip to face NFC East rivals Washington Commanders on Sunday afternoon. It will be the first meeting with former first round pick Carson Wentz, who has led his team to a 1-1 start.

Wentz might be familiar with what the Eagles defense brings to the table, but they will be tough to break down if they play with the same energy they did on Monday night.

“Let’s get right back to business,” center Jason Kelce said. “A win is great and it feels good, but we know it’s a long season and this is just one week. It’s good to leave here with a win and now it’s on to Washington and that’s what matters next.”