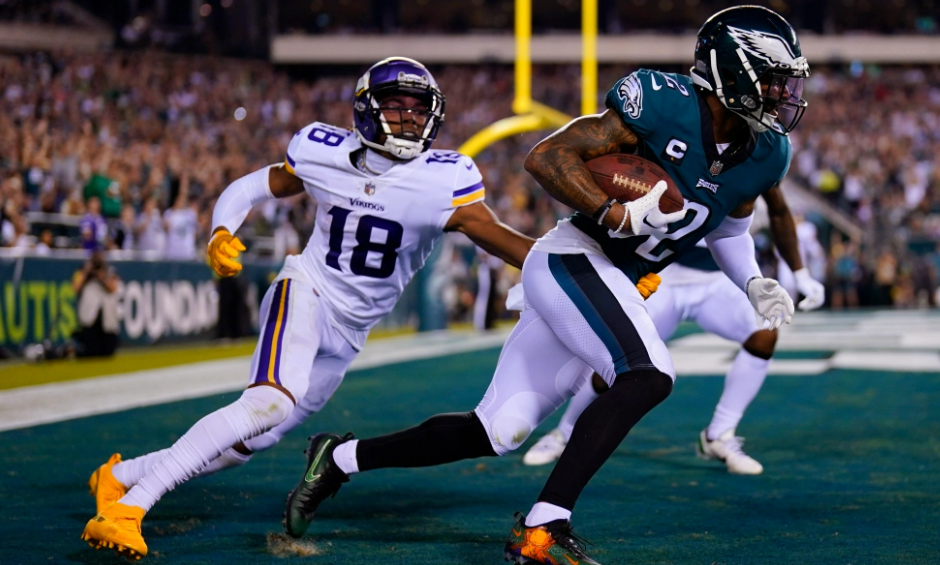 We’re back with an all new Brew. The Eagles and Darius Slay had a big week. Don the Con is facing a huge lawsuit. What does the WWE have up their sleeves with their “White Rabbit” teasers. Will we see Floyd Mayweather fight Conor McGregor again? We have a lot to get to, so lets do this. It’s Brew time!

Eagles take down the Vikings on Monday Night Football

One of the best CB performances i’ve ever seen.#Eaglespic.twitter.com/jFbSh6Oqsi

Tough scene for the Vikings

y’all are so embarrassing. this ain’t it pic.twitter.com/P604wh97Vq

The Nature Boy going to bat for Tom Brady

I Would Suggest EVERYONE Get Off @TomBrady’s Ass And Applaud Him!! His Personal Life Is His Business!! NOT YOURS! To Judge, Comment On, Or Laugh About Makes You All Look Bad!!! So Disrespectful @espn! He’s The GOAT! pic.twitter.com/UzvnQcFHOx

Donald Trump appeared to more fully embrace QAnon on Saturday, playing a song at a rally in Ohio that prompted attendees to respond with a salute in reference to the cultlike conspiracy theory’s theme song. https://t.co/k9Ay94J26Y

Lawsuit filed against the Con-Man

BREAKING: New York AG Letitia James has filed a sweeping lawsuit against Donald Trump and his family alleging they used false financial statements to defraud lenders and others. https://t.co/mPWwDNY9Ea

We already knew Ron DeSantis is a piece of trash…but Wow!!!

!!! a fake brochure promising eight months cash assistance, food, job training/placement, help with housing + more was given to migrants who were lured by @GovRonDeSantis into boarding a flight to martha’s vineyard. @JuddLegum obtained a copy: https://t.co/nSIwWOE6Zh pic.twitter.com/RLtqoeLPC8

This came across my Instagram feed today, and it’s 💯 pic.twitter.com/skCmOWLSAj

Matt Gaetz should not be allowed near any youth

This explains it all

THIS DOES NOT SURPRISE ANYONE @kanyewest.

🏠 The housing market downturn has moved into its second stage: falling home prices.

Jadakiss’ past life as Diddy’s ghostwriter still haunts him … mostly because he hated everything about the process!!! https://t.co/Z2niNP5bgO

Nicole Scherzinger slaying it out in Portugal

Nicole Scherzinger puts on a busty display during sun-soaked getaway to Portugal https://t.co/0JVelS1WEw

Kylie Jenner says “rise and shine” in nothing but a bra in SIZZLING selfie https://t.co/mrqhWvX1xY

EXCLUSIVE: Survivor Series is now SURVIVOR SERIES WARGAMES. Read our interview with @TripleH and deep dive into WarGames history. From me and Oliver Lee Bateman (@MoustacheClubUS)https://t.co/3Wx1mbEheF

The video teases the date 9/23

There’s a bunny referencing the “White Rabbit” song playing the past few days at WWE events.