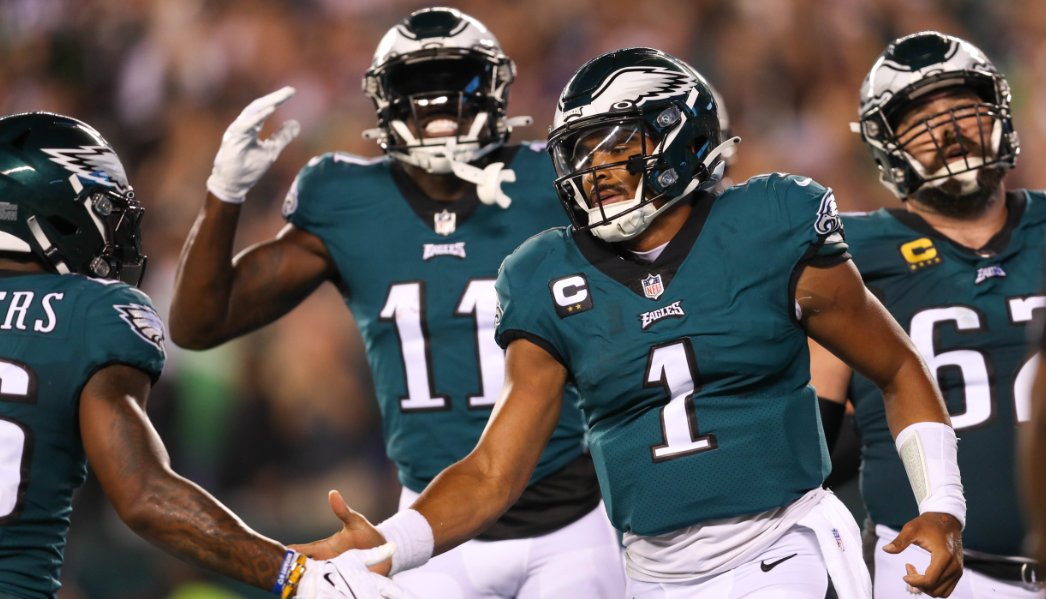 The Philadelphia Eagles have relied on a mixture of things to get to 2-0 in the early stages of the 2022 NFL season, but the most surprising might be the confident play of third-year quarterback Jalen Hurts.

Hurts has played exceptionally well in victories over the Detroit Lions and Minnesota Vikings, completing just under 70% of his passes, throwing for 576 yards, rushing for 146 yards, and totaling four touchdowns to only one interception. The former Alabama and Oklahoma product has made smart decisions with the football, choosing when to pass or run, and delivering the football to many open teammates.

With two years under his belt as a pro and two impressive performances against NFC North opposition, Hurts looks confident ahead of the start of NFC East play this weekend in Washington.

“It’s almost as if he’s grown up with a dad who was a coach,” Sirianni said about Hurts. “He’s been getting coached his whole life. Again, I just can’t say enough about Jalen, the person, that like we talk about all his abilities as a player, but the thing that makes you reach your ceiling as a player is when you have the other things: the toughness, the love of football, the football IQ. That’s what helps you reach your ceiling.”

“Now everybody is blessed with a different ceiling to reach as we know, right,” Sirianni added. “Everybody’s ceiling is different based off of what God gave them. But those guys that reach that ceiling are what Jalen has inside, and that’s what’s so special and that’s why you’re continuing to see him develop in my opinion. I don’t think I know what his ceiling is yet. I just continue to see him get better.”

Hurts’ confident play has also carried over to the rest of the team with Monday’s dominant performance against the Vikings standing out as one of the top results in the opening two weeks of the season. A.J. Brown excelled in Week 1, DeVonta Smith and the defense excelled in Week 2, setting up a major question of who will be the shining star in Week 3 at FedEx Field.

Hurts hasn’t been forced to take major shots downfield during the opening two weeks, but he’s made smart decisions with the football and has taken what the Lions and Vikings defenses have given him. Offensive coordinator Shane Steichen should also be credited for making smart playcalling decisions as the Eagles have kept it balanced by running and passing the ball.

Sirianni has praised both Hurts and Steichen for their relationship with one another and expects more success as the season pushes onward.

“I knew he had that in him and again I’m not surprised by anything that [QB] Jalen [Hurts] does on the football field because I’ve seen him doing this all off-season, all training camp, practices, the meeting room,” Hurts said. “I see his growth over just consistently all the time. Maybe to the outside world, it’s like, woah. I don’t think that surprises any of us in the building because we live with him every day, we see him every day and we see the growth every day, not only on the football field but on the practice field and in the meeting room.

“We started fast, great,” he added. “And the defense stayed fast the whole time and the offense, we didn’t score any points in the second half, right. And that’s partly me. I think I did — I took my foot off the gas and forced [Offensive Coordinator] Shane [Steichen] to take his foot off the gas and I know I did that and that’s not good enough on my part. There’s a lot of room for improvement. The penalties we need to clean up. The communication was better from Detroit. You’re just hoping to see that improvement each and every day, the things you’re working on and emphasizing.”

With the Eagles sitting as one of the few 2-0 teams in the league, expectations will continue to grow to keep the early-season winning streak going in Maryland this weekend. Former Eagles first-round draft pick Carson Wentz opposes the Eagles this week in the first of six NFC East divisional games for Sirianni’s squad in 2022.

While many fans are deservedly excited with the opening two victories of the season, the long-term goal for the Eagles will be to keep the foot on the gas through the next 16 weeks. Not only will divisional showdowns begin to occur more frequently, showdowns with tougher opponents like Green Bay, Tennessee, and Chicago will appear, providing new challenges for Hurts and the offense.

The Eagles are setting lofty goals to get back among the NFL’s elite this season, but know improvement week-by-week will truly help them achieve those goals.

“You see every year that a team starts 5-0 or 5-1, and they fall off, right,” Sirianni said. “You see every year that a team starts slow and they build. And so, we’re so early in this. There’s so much time to build. We are truly in the business of getting better every day, me included, coaches included. We are trying to elevate our play each day and we know in this league that there are so many teams that start fast and then they fizzle off.”

“So, our daily focus is truly — I know I sound like a broken record, I’m saying it over, and over and over again,” Sirianni added. “Our process is trying to get better each day and you’re never going to come away from a game and say, ‘Well, that was good enough.’ That’s just not how we live, how we operate. Like I said, just with the illegal men downfield, there are mistakes I’ve made there that I want to get better at. I’m always going through the process of looking myself in the mirror first so I’m living that philosophy. Then I’m going to challenge the coaches offensively, defensively and special teams in that same philosophy and then it will go down to the players.”